Before the invention of calculus, the notion of continuity was treated intuitively if it was treated at all. At first pass, it seems a very simple idea based solidly in our experience of the real world. Standing on the bank we see a river ﬂow past us continuously, not by tiny jerks. Even when the ﬂow might seem at first to be discontinuous, as when it drops precipitously over a cliff, a closer examination shows that it really is not. As the water approaches the cliff it speeds up. When it finally goes over it accelerates very quickly but no matter how fast it goes it moves continuously, moving from here to there by occupying every point in between. This is continuous motion. It never disappears over there and instantaneously reappears over here. That would be discontinuous motion.

Similarly, a thrown stone ﬂies continuously (and smoothly) from release point to landing point, passing through each point in its path.

But wait. If the stone passes through discrete points it must be doing so by teeny tiny little jerks, mustn’t it? Otherwise how would it get from one point to the next? Is it possible that motion in the real world, much like motion in a movie, is really composed of tiny jerks from one point to the next but that these tiny jerks are simply too small and too fast for our senses to detect?

If so, then the real world is more like the rational number line (\(\mathbb{Q}\)) from Chapter 1 than the real number line (\(\mathbb{R}\)). In that case, motion really consists of jumping discretely over the “missing” points (like \(\sqrt{2}\)) as we move from here to there. That may seem like a bizarre idea to you – it does to us as well – but the idea of continuous motion is equally bizarre. It’s just a little harder to see why.

The real world will be what it is regardless of what we believe it to be, but fortunately in mathematics we are not constrained to live in it. So we won’t even try. We will simply postulate that no such jerkiness exists; that all motion is continuous.

However we are constrained to live with the logical consequences of our assumptions, once they are made. These will lead us into some very deep waters indeed.

The intuitive treatment of continuity was maintained throughout the 1700’s as it was not generally perceived that a truly rigorous definition was necessary. Consider the following definition given by Euler in 1748.

A continuous curve is one such that its nature can be expressed by a single function of \(x\). If a curve is of such a nature that for its various parts ... different functions of \(x\) are required for its expression, ..., then we call such a curve discontinuous.

However, the complexities associated with Fourier series and the types of functions that they represented caused mathematicians in the early 1800’s to rethink their notions of continuity. As we saw in Part II, the graph of the function defined by the Fourier series Figure \(\PageIndex{1}\): Graph of function defined by the Fourier series.

This function went against Euler’s notion of what a continuous function should be. Here, an infinite sum of continuous cosine curves provided a single expression which resulted in a “discontinuous” curve. But as we’ve seen this didn’t happen with power series and an intuitive notion of continuity is inadequate to explain the difference. Even more perplexing is the following situation. Intuitively, one would think that a continuous curve should have a tangent line at at least one point. It may have a number of jagged points to it, but it should be “smooth” somewhere. An example of this would be \(f(x) = x^{2/3}\). Its graph is given by 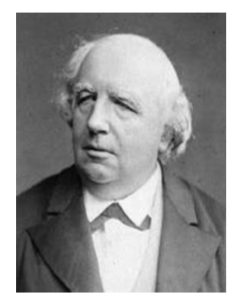 Surprisingly, in 1872, Karl Weierstrass showed that the above conjecture is FALSE. He did this by displaying the counterexample:

Weierstrass showed that if \(a\) is an odd integer, \(b ∈ (0,1)\), and \(ab > 1 + \frac{3}{2}π\), then \(f\) is continuous everywhere, but is nowhere differentiable. Such a function is somewhat “fractal” in nature, and it is clear that a definition of continuity relying on intuition is inadequate to study it.

Just as it was important to define convergence with a rigorous definition without appealing to intuition or geometric representations, it is imperative that we define continuity in a rigorous fashion not relying on graphs.

Rein analytischer Beweis des Lehrsatzes dass zwieschen je zwey Werthen, die ein entgegengesetztes Resultat gewaehren, wenigstens eine reele Wurzel der Gleichung liege (Purely Analytic Proof of the Theorem that Between Any Two Values that Yield Results of Opposite Sign There Will be at Least One Real Root of the Equation). From the title it should be clear that in this paper Bolzano is proving the Intermediate Value Theorem. To do this he needs a completely analytic definition of continuity. The substance of Bolzano’s idea is that if \(f\) is continuous at a point a then \(f(x)\) should be “close to” \(f(a)\) whenever \(x\) is “close enough to” \(a\). More precisely, Bolzano said that \(f\) is continuous at a provided \(|f(x) - f(a)|\) can be made smaller than any given quantity provided we make \(|x - a|\) sufficiently small.

Bolzano’s paper was not well known when Cauchy proposed a similar definition in his Cours d’analyse [1] of 1821 so it is usually Cauchy who is credited with this definition, but even Cauchy’s definition is not quite tight enough for modern standards. It was Karl Weierstrass in 1859 who finally gave the modern definition.

Our definition fits the bill in that it does not rely on either intuition or graphs, but it is this very non-intuitiveness that makes it hard to grasp. It usually takes some time to become comfortable with this definition, let alone use it to prove theorems such as the Extreme Value Theorem and Intermediate Value Theorem. So let’s go slowly to develop a feel for it.

This definition spells out a completely black and white procedure: you give me a positive number \(ε\), and I must be able to find a positive number \(δ\) which satisfies a certain property. If I can always do that then the function is continuous at the point of interest.

In our definition of continuity, we still need to make something small (namely \(|f(x) - f(a)| < ε\)), only this time, we need to determine how close \(x\) must be to a to ensure this will happen instead of determining how large \(n\) must be. The precision of the definition is what allows us to examine continuity without relying on pictures or vague notions such as “nearness” or “getting closer to.” We will now consider some examples to illustrate this precision.

If we were to draw the graph of this line, then you would likely say that this is obvious. The point behind the definition is that we can back up your intuition in a rigorous manner.

Notice that in these proofs, the challenge of an \(ε > 0\) was first given. This is because the choice of \(δ\) must depend upon \(ε\). Also notice that there was no explanation for our choice of \(δ\). We just supplied it and showed that it worked. As long as \(δ > 0\), then this is all that is required. In point of fact, the \(δ\) we chose in each example was not the only choice that worked; any smaller \(δ\) would work as well.

Use the definition of continuity to show that

Sometimes the \(δ\) that will work for a particular \(ε\) is fairly obvious to see, especially after you’ve gained some experience. This is the case in the above examples (at least after looking back at the proofs). However, the task of finding a \(δ\) to work is usually not so obvious and requires some scrapwork. This scrapwork is vital toward producing a \(δ\), but again is not part of the polished proof. This can be seen in the following example.

This seems to suggest that we should make \(δ = ε\). We’re now ready for the formal proof.

Bear in mind that someone reading the formal proof will not have seen the scrapwork, so the choice of \(δ\) might seem rather mysterious. However, you are in no way bound to motivate this choice of \(δ\) and usually you should not, unless it is necessary for the formal proof. All you have to do is find this \(δ\) and show that it works. Furthermore, to a trained reader, your ideas will come through when you demonstrate that your choice of \(δ\) works.

Now reverse this last statement. As a trained reader, when you read the proof of a theorem it is your responsibility to find the scrapwork, to see how the proof works and understand it fully. Don’t just read it; fight it! Ask your own questions, look for your own examples, discover your own proofs. Is the hypothesis necessary? Is the converse true? What happens in the classical special case? What about the degenerate cases? Where does the proof use the hypothesis?

This is the way to learn mathematics. It is really the only way.

Use the definition of continuity to show that \(f(x) = \sqrt{x}\) is continuous at any positive real number \(a\).

In the above problems, we used the definition of continuity to verify our intuition about the continuity of familiar functions. The advantage of this analytic definition is that it can be applied when the function is not so intuitive. Consider, for example, the function given at the end of the last chapter. As we mentioned in the previous chapter, since \(\sin \left (\frac{1}{x} \right )\) oscillates infinitely often as \(x\) nears zero this graph must be viewed with a certain amount of suspicion. However our completely analytic definition of continuity shows that this function is, in fact, continuous at \(0\).

Even more perplexing is the function defined by

To the naked eye, the graph of this function looks like the lines \(y = 0\) and \(y = x\). Of course, such a graph would not be the graph of a function. Actually, both of these lines have holes in them. Wherever there is a point on one line there is a “hole” on the other. Each of these holes are the width of a single point (that is, their “width” is zero!) so they are invisible to the naked eye (or even magnified under the most powerful microscope available). This idea is illustrated in the following graph Can such a function so “full of holes” actually be continuous anywhere? It turns out that we can use our definition to show that this function is, in fact, continuous at \(0\) and at no other point.