Once Cantor showed that there were two types of inﬁnity (countable and uncountable), the following question was natural, “Do all uncountable sets have the same cardinality?”

Just like not all “non-dogs” are cats, there is, oﬀ-hand, no reason to believe that all uncountable sets should be the same size. However constructing uncountable sets of diﬀerent sizes is not as easy as it sounds.

For example, what about the line segment represented by the interval \([0,1]\) and the square represented by the set \([0,1] × [0,1] = \{(x,y)|0 ≤ x,y ≤ 1\}\). Certainly the two dimensional square must be a larger inﬁnite set than the one dimensional line segment. Remarkably, Cantor showed that these two sets were the same cardinality. In his 1877 correspondence of this result to his friend and fellow mathematician, Richard Dedekind, even Cantor remarked, “I see it, but I don’t believe it!” 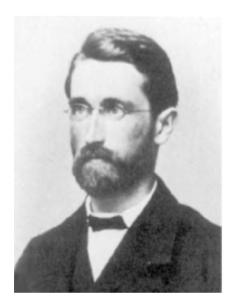 This relatively simple idea has some technical diﬃculties in it related to the following result.

The following two problems show that deleting a countable set from an uncountable set does not change its cardinality.

As was indicated before, Cantor’s work on inﬁnite sets had a profound impact on mathematics in the beginning of the twentieth century. For example, in examining the proof of Cantor’s Theorem, the eminent logician Bertrand Russell devised his famous paradox in 1901. Before this time, a set was naively thought of as just a collection of objects. Through the work of Cantor and others, sets were becoming a central object of study in mathematics as many mathematical concepts were being reformulated in terms of sets. The idea was that set theory was to be a unifying theme of mathematics. This paradox set the mathematical world on its ear.

Consider the set of all sets which are not elements of themselves. We call this set \(D\) and ask, “Is \(D ∈ D\)?” Symbolically, this set is

If you look back at the proof of Cantor’s Theorem, this was basically the idea that gave us the contradiction. To have such a contradiction occurring at the most basic level of mathematics was scandalous. It forced a number of mathematicians and logicians to carefully devise the axioms by which sets could be constructed. To be honest, most mathematicians still approach set theory from a naive point of view as the sets we typically deal with fall under the category of what we would call “normal sets.” In fact, such an approach is oﬃcially called Naive Set Theory (as opposed to Axiomatic Set Theory). However, attempts to put set theory and logic on solid footing led to the modern study of symbolic logic and ultimately the design of computer (machine) logic.

Since \(\mathbb{R}\) has the same cardinality as \(P(N)\), then the Continuum Hypothesis was generalized to the:

Given an inﬁnite set \(S\), there is no inﬁnite set which has a cardinality strictly between that of \(S\) and its power set \(P(S)\).

We are willing to bet that at this point your head might be swimming a bit with uncertainty. If so, then know that these are the same feelings that the mathematical community experienced in the mid twentieth century. In the past, mathematics was seen as a model of logical certainty. It is disconcerting to ﬁnd that there are statements that are “undecidable.” In fact, Gödel proved in 1931 that a consistent ﬁnite axiom system that contained the axioms of arithmetic would always contain undecidable statements which could neither be proved true nor false with those axioms. Mathematical knowledge would always be incomplete. So by trying to put the foundations of calculus on solid ground, we have come to a point where we can never obtain mathematical certainty. Does this mean that we should throw up our hands and concede defeat? Should we be paralyzed with fear of trying anything? Certainly not! As we mentioned before, most mathematicians do well by taking a pragmatic approach: using their mathematics to solve problems that they encounter. In fact, it is typically the problems that motivate the mathematics. It is true that mathematicians take chances that don’t always pan out, but they still take these chances, often with success. Even when the successes lead to more questions, as they typically do, tackling those questions usually leads to a deeper understanding. At the very least, our incomplete understanding means we will always have more questions to answer, more problems to solve.

What else could a mathematician ask for?

1 One of the formal axiomatic approaches to set theory established by Ernst Zermelo in 1908 and revised by Abraham Fraenkel in 1921.