What do we mean when we say that two actors have "similar" patterns of relations, and hence are both members of the same role or social position? Network analysts most broadly defines two nodes (or other more elaborate structures) as similar if they fall in the same "equivalence class". Frankly, that's no immediate help. But it does say that there is something that would cause us to say two actors (or other structures) are members of a "class" that is different from other "classes".

Now it becomes a question of what features of an actor's position place them into a "class" with other actors? In what way are they "equivalent"?

There are many ways in which actors could be defined as "equivalent" based on their relations with others. For example, we could create two "equivalence classes" of actors with out-degree of zero, and actors with out-degree of more than zero. Indeed, a very large number of the algorithms we've examined group sets of actors into categories based on some commonality in their positions in graphs.

The basic ideas of these three kinds of equivalence are easily illustrated with a simple graph (developed by Wasserman and Faust). Consider Figure 12.1, a simple graph of the relations among nine actors "A" to "I". 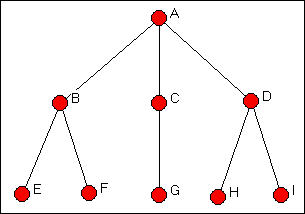 This graph provides particularly clear examples of how structural, automorphic, and regular equivalence differ. Let's look in more detail at these ideas, starting with the most restrictive notion of what it means for actors to be equivalent.

In Figure \(\PageIndex{1}\), there are seven "structural equivalence classes". Can you find them?

Actors that are structurally equivalent are in identical "positions" in the structure of the diagram. Whatever opportunities and constraints operate on one member of a class are also present for the others. The nodes in a structural equivalence class are, in a sense, in the same position with regard to all other actors.

Structural equivalence is the "strongest" form of equivalence that network analysts usually consider. If we soften the requirements just a bit, we can often find some interesting other patterns of equivalence.

The idea of structural equivalence is powerful because it identifies actors that have the same position, or who are completely substitutable. But, even intuitively, you can probably imagine other "less strict" definitions of what it means for two actors to be similar or equivalent.

Suppose that the graph in Figure \(\PageIndex{1}\) described a franchise group of hamburger restaurants. Actor A is the central headquarters, actors B, C, and D are the managers of three different stores. Actors E and F are workers at one store; G is the lone worker at a second store; H and I are workers at the third store.

Even though actor B and actor D are not structurally equivalent (they doe have the same boss, but not the same workers), they do seem to be "equivalent" in a different sense. Both manager B and manager D report to a boss (in this case, the same boss), and each has exactly two workers. These are different people, but the two managers seem somehow equivalent. If we swapped them, and also swapped the four workers, all of the distances among all the actors in the graph would be exactly identical. In fact, actors B and D form an "automorphic" equivalence class.

In Figure \(\PageIndex{1}\), there are actually five automorphic equivalence classes: {A}, {B, D}, {C}, {E, F, H, I}, and {G}. These classes are groupings whose members would remain at the same distance from all other actors if they were swapped, and, members of other classes were also swapped.

The idea of automorphic equivalence is that sets of actors can be equivalent by being embedded in local structures that have the same patterns of ties - "parallel" structures. Large scale populations of social actors (perhaps like hamburger restaurant chains) can display a great deal of this sort of "structural replication". The faces are different, but the structures are identical.

Note that the less strict definition of "equivalence" had reduced the number of classes. If we are willing to go one important step further, we can reduce the complexity still further.

Two mothers, for example, are "equivalent" because each has a certain pattern of ties with a husband, children, and in-laws (for one example - but one that is very culturally relative). The two mothers do not have ties to the same husband (usually) or the same children or in-laws. That is, they are not "structurally equivalent". Because different mothers may have different numbers of husbands, children, and in-laws, they will not be automorphically equivalent. But they are similar because they have the same relationships with some member or members of another set of actors (who are themselves regarded as equivalent because of the similarity of their ties to a member of the set "mother").

This is an obvious notion, but a critical one. Regular equivalence sets describe the "social roles" that are the basic building blocks of all social institutions. Actors that are regularly equivalent to not necessarily fall in the same network positions or locations with respect to other individual actors; rather, they have the same kinds of relationships with some members of other sets of actors.

The easiest class to see is the give actors across the bottom of the figure (E, F, G, H, and I). These actors are regularly equivalent to one another because a) they have no tie with any actor in the first class (that is, with actor A) and b) each has a tie with an actor in the second class (either B, C, or D). Each of the five actors, then, has an identical pattern of ties with actors in the other classes.