In this section we begin to study how functions behave between special points; we begin studying in more detail the shape of their graphs.

We start with an intuitive concept. Given the graph in Figure \(\PageIndex{1}\), where would you say the function is increasing? Decreasing? Figure \(\PageIndex{1}\): A graph of a function \(f\) used to illustrate the concepts of increasing and decreasing.

A function is strictly increasing when \(a<b\) in \(I\) implies \(f(a) < f(b)\), with a similar definition holding for strictly decreasing.

Our interest lies in finding intervals in the domain of \(f\) on which \(f\) is either increasing or decreasing. Such information should seem useful. For instance, if \(f\) describes the speed of an object, we might want to know when the speed was increasing or decreasing (i.e., when the object was accelerating vs. decelerating). If \(f\) describes the population of a city, we should be interested in when the population is growing or declining. Figure \(\PageIndex{2}\): Examining the secant line of an increasing function.

We have shown mathematically what may have already been obvious: when \(f\) is increasing, its secant lines will have a positive slope. Now recall the Mean Value Theorem guarantees that there is a number \(c\), where \(a<c<b\), such that

By considering all such secant lines in \(I\), we strongly imply that \(f'(x) \geq 0\) on \(I\). A similar statement can be made for decreasing functions.

Key Idea 3: Finding Intervals on Which \(f\) is Increasing or Decreasing

Let \(f\) be a differentiable function on an interval I. To find intervals on which \(f\) is increasing and decreasing:

We demonstrate using this process in the following example. 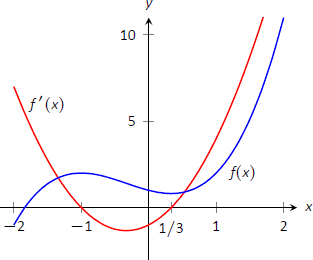 One is justified in wondering why so much work is done when the graph seems to make the intervals very clear. We give three reasons why the above work is worthwhile.

First, the points at which \(f\) switches from increasing to decreasing are not precisely known given a graph. The graph shows us something significant happens near \(x=-1\) and \(x=0.3\), but we cannot determine exactly where from the graph.

So our second reason why the above work is worthwhile is this: once mastery of a subject is gained, one has options for finding needed information. We are working to develop mastery.

Finally, our third reason: many problems we face "in the real world" are very complex. Solutions are tractable only through the use of computers to do many calculations for us. Computers do not solve problems "on their own," however; they need to be taught (i.e., programmed) to do the right things. It would be beneficial to give a function to a computer and have it return maximum and minimum values, intervals on which the function is increasing and decreasing, the locations of relative maxima, etc. The work that we are doing here is easily programmable. It is hard to teach a computer to "look at the graph and see if it is going up or down." It is easy to teach a computer to "determine if a number is greater than or less than 0."

Find the intervals on which \(f\) is increasing and decreasing, and use the First Derivative Test to determine the relative extrema of \(f\), where

Since \(f\) is not defined at \(x=1\), the increasing/decreasing nature of \(f\) could switch at this value. We do not formally consider \(x=1\) to be a critical value of \(f\), but we will include it in our list of critical values that we find next.

Using the Quotient Rule, we find

We have found that \(f\) has two critical numbers, \(x=-1,3\), and at \(x=1\) something important might also happen. These three numbers divide the real number line into 4 subintervals:

Pick a number \(p\) from each subinterval and test the sign of \(f'\) at \(p\) to determine whether \(f\) is increasing or decreasing on that interval. Again, we do well to avoid complicated computations; notice that the denominator of \(f'\) is always positive so we can ignore it during our work. We examine one more example. 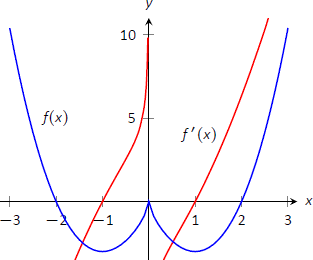