We are generally introduced to the idea of graphing curves by relating \(x\)-values to \(y\)-values through a function \(f\). That is, we set \(y=f(x)\), and plot lots of point pairs \((x,y)\) to get a good notion of how the curve looks. This method is useful but has limitations, not least of which is that curves that "fail the vertical line test'' cannot be graphed without using multiple functions.

The previous two sections introduced and studied a new way of plotting points in the \(x,y\)-plane. Using parametric equations, \(x\) and \(y\) values are computed independently and then plotted together. This method allows us to graph an extraordinary range of curves. This section introduces yet another way to plot points in the plane: using polar coordinates.

Start with a point \(O\) in the plane called the pole (we will always identify this point with the origin). From the pole, draw a ray, called the initial ray (we will always draw this ray horizontally, identifying it with the positive \(x\)-axis). A point \(P\) in the plane is determined by the distance \(r\) that \(P\) is from \(O\), and the angle \(\theta\) formed between the initial ray and the segment \(\overline{OP}\) (measured counter-clockwise). We record the distance and angle as an ordered pair \((r,\theta)\). To avoid confusion with rectangular coordinates, we will denote polar coordinates with the letter \(P\), as in \(P(r,\theta)\). This is illustrated in Figure \(\PageIndex{1}\). 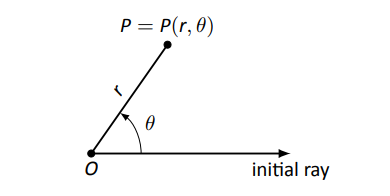 To aid in the drawing, a polar grid is provided at the bottom of this page. To place the point \(A\), go out 1 unit along the initial ray (putting you on the inner circle shown on the grid), then rotate counter-clockwise \(\pi/4\) radians (or \(45^\circ\)). Alternately, one can consider the rotation first: think about the ray from \(O\) that forms an angle of \(\pi/4\) with the initial ray, then move out 1 unit along this ray (again placing you on the inner circle of the grid).

To plot \(C\), go out 2 units along the initial ray then rotate clockwise \(\pi/3\) radians, as the angle given is negative.

This ability to identify a point in the plane with multiple polar coordinates is both a "blessing'' and a "curse.'' We will see that it is beneficial as we can plot beautiful functions that intersect themselves (much like we saw with parametric functions). The unfortunate part of this is that it can be difficult to determine when this happens. We'll explore this more later in this section. Given the polar point \(P(r,\theta)\), the rectangular coordinates are determined by

These points are plotted in Figure \(\PageIndex{4}\) (b). The polar system is drawn lightly under the rectangular grid with rays to demonstrate the angles used. Describe the graphs of the following polar functions. The basic rectangular equations of the form \(x=h\) and \(y=k\) create vertical and horizontal lines, respectively; the basic polar equations \(r= h\) and \(\theta =\alpha\) create circles and lines through the pole, respectively. With this as a foundation, we can create more complicated polar functions of the form \(r=f(\theta)\). The input is an angle; the output is a length, how far in the direction of the angle to go out.

We sketch these functions much like we sketch rectangular and parametric functions: we plot lots of points and "connect the dots'' with curves. We demonstrate this in the following example.

A common question when sketching curves by plotting points is "Which points should I plot?'' With rectangular equations, we often choose "easy'' values -- integers, then added more if needed. When plotting polar equations, start with the "common'' angles -- multiples of \(\pi/6\) and \(\pi/4\). Figure \(\PageIndex{6}\) gives a table of just a few values of \(\theta\) in \([0,\pi]\).

The graph shown uses more points, connected with straight lines. (The points on the graph that correspond to points in the table are signified with larger dots.) Such a sketch is likely good enough to give one an idea of what the graph looks like. Plotting functions in this way can be tedious, just as it was with rectangular functions. To obtain very accurate graphs, technology is a great aid. Most graphing calculators can plot polar functions; in the menu, set the plotting mode to something like \(\texttt{polar}\) or \(\texttt{POL}\), depending on one's calculator. As with plotting parametric functions, the viewing "window'' no longer determines the \(x\)-values that are plotted, so additional information needs to be provided. Often with the "window'' settings are the settings for the beginning and ending \(\theta\) values (often called \(\theta_{\text{min}}\) and \(\theta_{\text{max}}\)) as well as the \(\theta_{\text{step}}\) -- that is, how far apart the \(\theta\) values are spaced. The smaller the \(\theta_{\text{step}}\) value, the more accurate the graph (which also increases plotting time). Using technology, we graphed the polar function \(r=1+\cos \theta\) from Example 9.4.4 in Figure \(\PageIndex{7}\). We start by making a table of \(\cos (2\theta)\) evaluated at common angles \(\theta\), as shown in Figure \(\PageIndex{8}\). These points are then plotted in Figure \(\PageIndex{9}\) (a). This particular graph "moves'' around quite a bit and one can easily forget which points should be connected to each other. To help us with this, we numbered each point in the table and on the graph. Figure \(\PageIndex{8}\): Tables of points for plotting a polar curve.

Using more points (and the aid of technology) a smoother plot can be made as shown in Figure \(\PageIndex{9}\) (b). This plot is an example of a rose curve. It is sometimes desirable to refer to a graph via a polar equation, and other times by a rectangular equation. Therefore it is necessary to be able to convert between polar and rectangular functions, which we practice in the following example. We will make frequent use of the identities found in Key Idea 40.

Convert from rectangular to polar.

Convert from polar to rectangular. Some curves have very simple polar equations but rather complicated rectangular ones. For instance, the equation \(r=1+\cos\theta\) describes a cardiod (a shape important the sensitivity of microphones, among other things; one is graphed in the gallery in the Lima\c con section). It's rectangular form is not nearly as simple; it is the implicit equation

The conversion is not "hard,'' but takes several steps, and is left as a problem in the Exercise section.

There are a number of basic and "classic'' polar curves, famous for their beauty and/or applicability to the sciences. This section ends with a small gallery of some of these graphs. We encourage the reader to understand how these graphs are formed, and to investigate with technology other types of polar functions.

Earlier we discussed how each point in the plane does not have a unique representation in polar form. This can be a "good'' thing, as it allows for the beautiful and interesting curves seen in the preceding gallery. However, it can also be a "bad'' thing, as it can be difficult to determine where two curves intersect.

Determine where the graphs of the polar equations \(r=1+3\cos\theta\) and \(r=\cos \theta\) intersect.

SOLUTION
As technology is generally readily available, it is usually a good idea to start with a graph. We have graphed the two functions in Figure \(\PageIndex{11}\)(a); to better discern the intersection points, part (b) of the figure zooms in around the origin.

Figure \(\PageIndex{11}\): Graphs to help determine the points of intersection of the polar functions given in Example 9.4.7

We start by setting the two functions equal to each other and solving for \(\theta\):

There is yet another point of intersection: the pole (or, the origin). We did not recognize this intersection point using our work above as each graph arrives at the pole at a different \(\theta\) value.

If all one is concerned with is the \((x,y)\) coordinates at which the graphs intersect, much of the above work is extraneous. We know they intersect at \((0,0)\); we might not care at what \(\theta\) value. Likewise, using \(\theta =2\pi/3\) and \(\theta=4\pi/3\) can give us the needed rectangular coordinates. However, in the next section we apply calculus concepts to polar functions. When computing the area of a region bounded by polar curves, understanding the nuances of the points of intersection becomes important.