George Pólya and Robert Redfield independently developed a theory of generating functions that describe the action of a group G on colorings of a set S by a set T when we know the action of G on S. Pólya’s work on the subject is very accessible in its exposition, and so the subject has become popularly known as Pólya theory, though Pólya-Redfield theory would be a better name. In this section we develop the elements of this theory. The idea of coloring a set S has many applications. For example, the set S might be the positions in a hydrocarbon molecule which are occupied by hydrogen, and the group could be the group of spatial symmetries of the molecule (that is, the group of permutations of the atoms of the molecule that move the molecule around so that in its final position the molecule cannot be distinguished from the original molecule). The colors could then be radicals (including hydrogen itself) that we could substitute for each hydrogen position in the molecule. Then the number of orbits of colorings is the number of chemically different compounds we could create by using these substitutions.6

In Figure 6.8 we show two different ways to substitute the OH radical for a hydrogen atom in the chemical diagram we gave for butane in Chapter 2. We have colored one vertex of degree 1 with the radical OH and the rest with the atom H. There are only two distinct ways to do this, as the OH must either connect to an “end” C or a “middle” C. This shows that there are two different forms, called isomers of the compound shown. This compound is known as butyl alcohol.

6There is a fascinating subtle issue of what makes two molecules different. For example, suppose we have a molecule in the form of a cube, with one atom at each vertex. If we interchange the top and bottom faces of the cube, each atom is still connected to exactly the same atoms as before. However, we cannot achieve this permutation of the vertices by a member of the rotation group of the cube. It could well be that the two versions of the molecule interact with other molecules in different ways, in which case we would consider them chemically different. On the other hand, if the two versions interact with other molecules in the same way, we would have no reason to consider them chemically different. This kind of symmetry is an example of what is called chirality in chemistry.

So think intuitively about some “figure” that has places to be colored. (Think of the faces of a cube, the beads on a necklace, circles at the vertices of an n-gon, etc.) How can we picture the coloring? If we number the places to be colored, say 1 to n, then we have a standard way to represent our coloring. For example, if our colors are blue, green and red, then \(BBGRRGBG\) describes a typical coloring of 8 such places. Unless the places are somehow “naturally” numbered, this idea of a coloring imposes structure that is not really there. Even if the structure is there, visualizing our colorings in this way doesn’t “pull together” any common features of different colorings; we are simply visualizing all possible colorings. We have a group (think of it as symmetries of the figure you are imagining) that acts on the places. That group then acts in a natural way on the colorings of the places and we are interested in orbits of the colorings. Thus we want a picture that pulls together the common features of the colorings in an orbit. One way to pull together similarities of colorings would be to let the letters we are using as pictures of colors commute as we did with our pictures in Chapter 4; then our picture \(BBGRRGBG\) becomes \(B^3G^3R^2\), so our picture now records simply how many times we use each color. Think about how we defined the action of a group on the colorings of a set on which the group acts. You will see that acting with a group element won’t change how many times each color is used; it simply moves colors to different places. Thus the picture we now have of a given coloring is an equally appropriate picture for each coloring in an orbit. One natural question for us to ask is “How many orbits have a given picture?”

Suppose we draw identical circles at the vertices of a regular hexagon. Suppose we color these circles with two colors, red and blue.

In Problem 310c we saw a picture enumerator for pictures of orbits of the action of a group on colorings. As above, we ask how many orbits of the colorings have any given picture. We can think of a multivariable generating function in which the letters we use to picture individual colors are the variables, and the coefficient of a picture is the number of orbits with that picture. Such a generating function provides an answer to our natural question, and so it is this sort of generating function we will seek. Since the CFB theorem was our primary tool for saying how many orbits we have, it makes sense to think about whether the CFB theorem has an analog in terms of pictures of orbits.

•314. Use the Orbit-Fixed Point Theorem to determine the Orbit Enumerator for the colorings, with two colors (red and blue), of six circles placed at the vertices of a hexagon which is free to move in the plane. Compare the coefficients of the resulting polynomial with the various orbits you found in Problem 310. 315. Find the generating function (in variables R, B) for colorings of the faces of a cube with two colors (red and blue). What does the generating function tell you about the number of ways to color the cube (up to spatial movement) with various combinations of the two colors?

Pólya’s (and Redfield’s) famed enumeration theorem deals with situations such as those in Problems 314 and 315 in which we want a generating function for the set of all colorings a set S using a set T of colors, where the picture of a coloring is the product of the multiset of colors it uses. We are again thinking of the colors as variables. The point of the next series of problems is to analyze the solutions to Problems 314 and 315 in order to see what Pólya and Redfield saw (though they didn’t see it in this notation or using this terminology).

To the extent that you haven’t already done it in an earlier problem, answer the following questions. How many such rotations does the group have? What are the other “kinds” of group elements, and what are their cycle structures? Discuss the relationship between the cycle decomposition and the factored enumerator in Problem 317. •320. The usual way of describing the Pólya-Redfield enumeration theorem involves the “cycle indicator” or “cycle index” of a group acting on a set. Suppose we have a group G acting on a finite set S. Since each group element σ gives us a permutation σ of S, as such it has a decomposition into disjoint cycles as a permutation of S. Suppose σ has c1 cycles of size 1, c2 cycles of size 2, ..., cn cycles of size n. Then the cycle monomial of σ is z(σ) = z c1 1 z c2 2 · · · z cn n . The cycle indicator or cycle index of G acting on S is Z(G, S) = 1 |G| X σ:σ∈G z(σ). •(a) What is the cycle index for the group D6 acting on the vertices of a hexagon? (b) What is the cycle index for the group of rotations of the cube acting on the faces of the cube?

How can you compute the Orbit Enumerator of G acting on colorings of S by a finite set T of colors from the cycle index of G acting on S? (Use t, thought of as a variable, as the picture of an element t of T.) State and prove the relevant theorem! This is Pólya’s and Redfield’s famous enumeration theorem.

Suppose we make a necklace by stringing 12 pieces of brightly colored plastic tubing onto a string and fastening the ends of the string together. We have ample supplies of blue, green, red, and yellow tubing available. Give a generating function in which the coefficient of BiGjRkY h is the number of necklaces we can make with i blues, j greens, k reds, and h yellows. How many terms would this generating function have if you expanded it in terms of powers of B, G, R, and Y ? Does it make sense to do this expansion? How many of these necklaces have 3 blues, 3 greens, 2 reds, and 4 yellows?

324. We have red, green, and blue sticks all of the same length, with a dozen sticks of each color. We are going to make the skeleton of a cube by taking eight identical lumps of modeling clay and pushing three sticks into each lump so that the lumps become the vertices of the cube. (Clearly we won’t need all the sticks!) In how many different ways could we make our cube? How many cubes have four edges of each color? How many have two red, four green, and six blue edges?

325. How many cubes can we make in Problem 324 if the lumps of modeling clay can be any of four colors? 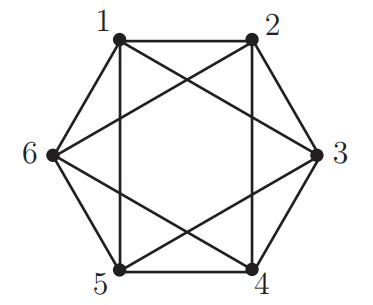 In Figure 6.9 we see a graph with six vertices. Suppose we have three different kinds of computers that can be placed at the six vertices of the graph to form a network. In how many different ways may the computers be placed? (Two graphs are not different if we can redraw one of the graphs so that it is identical to the other one.) This is equivalent to permuting the vertices in some way so that when we apply the permutation to the endpoints of the edges to get a new edge set, the new edge set is equal to the old one. Such a permutation is called an automorphism of the graph. Then two computer placements are the same if there is an automorphism of the graph that carries one to the other. Online hint. A second online hint.

1. Show that a function from S to T has an inverse (defined on T) if and only if it is a bijection.

2. How many elements are in the dihedral group D3? The symmetric group S3? What can you conclude about D3 and S3?