"But wait!" cries the incredulous reader. "You just said that this is the language of number theory, so certainly we already know what each of those symbols means."

Probably the interpretation you had in mind (what we will call the standard model for number theory) works with the set of natural numbers \(\{ 0, 1, 2, 3, \ldots \}\). The symbol 0 stands for the number 0.

The symbol \(S\) is a unary function symbol, and the function for which that symbol stands is the successor function that maps a number to the next larger natural number. The symbols \(+\), \(\cdot\), and \(E\) represent the functions of addition, multiplication, and exponentiation, and the symbol \(<\) will be used for the "less than" relation.

But that is only one of the ways that we might choose to interpret those symbols. Another way to interpret all of those symbols would be to work with the numbers 0 and 1, interpreting the symbol 0 as the number 0, \(S\) as the function that maps 0 and 1 and 1 to 0, \(+\) as addition mod 2, \(\cdot\) as multiplication mod 2, and (just for variety) \(E\) as the function with constant value 1. The symbol \(<\) can still stand for the relation "less than".

Or, if we were in a slightly more bizarre mood, we could work in a universe consisting of Beethoven, Picasso, and Ernie Banks, interpreting the symbol 0 as Picasso, \(S\) as the identity function, \(<\) as equality, and each of the binary function symbols as the constant function with output Ernie Banks.

The point is that there is nothing sacred about one mathematical structure as opposed to another. Without determining the structure under consideration, without deciding how we wish to interpret the symbols of the language, we have no way of talking about the truth or falsity of a sentence as trivial as

Chaff: The letter \(\mathfrak{A}\) is a German Frakture capital A. We will also have occasion to use \(\mathfrak{A}\)'s friends, \(\mathfrak{B}\) and \(\mathfrak{C}\). \(\mathfrak{N}\) will be used for a particular structure involving the natural numbers. The use of this typeface is traditional (which means this is the way we learned it). For your handwritten work, probably using capital script letters will be the best.

Often, we will write a structure as an ordered \(k\)-tuple, like this:

As you can see, the notation is starting to get out of hand once again, and we will not hesitate to simplify and abbreviate when we believe that we can do so without confusion. So, when we are working in \(\mathcal{L}_{NT}\), we will often talk about the standard structure

where the constants, functions, and relations do not get the superscripts they deserve, and the authors trust that you will interpret \(\mathbb{N}\) as the collection \(\{0, 1, 2, \ldots \}\) of natural numbers, the symbol 0 to stand for the number 0, \(+\) to stand for addition, \(S\) to stand for the successor function, and so on. By the way, if you are not used to thinking of 0 as a natural number, do not panic. Set theorists see 0 as the most natural of objects, so we tend to include it in \(\mathbb{N}\) without thinking about it. 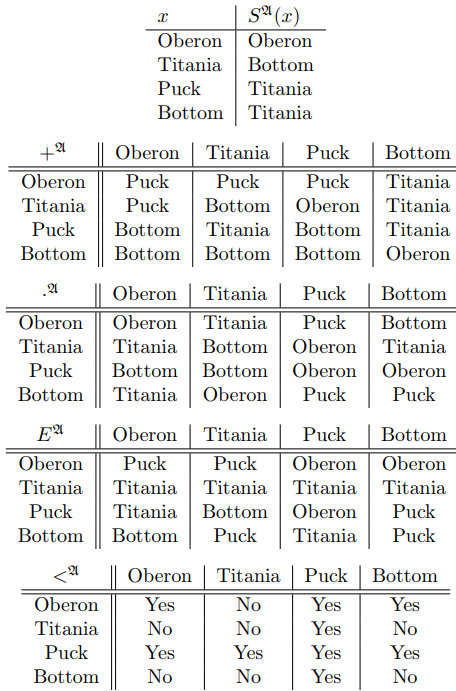 Example 1.6.2. The structure \(\mathfrak{N}\) that we have just introduced is called the standard \(\mathcal{L}_{NT}\)-structure. To emphasize that there are other perfectly good \(\mathcal{L}_{NT}\)-structures, let us construct a different \(\mathcal{L}_{NT}\)-structure \(\mathfrak{A}\) with exactly four elements. The elements of \(A\) will be Oberon, Titania, Puck, and Bottom. The constant \(0^\mathfrak{A}\) will be Bottom. Now we have to construct the functions and relations for our structure. As everything is unary or binary, setting forth tables (as in Table 1.1) seems a reasonable way to proceed. So you can see that in this structure \(\mathfrak{A}\) that Titania \(+\) Puck \(=\) Oberon, while Puck \(+\) Titania \(=\) Titania. You can also see that 0 (also known as Bottom) is not the additive identity in this structure, and that \(<\) is a very strange ordering.

Now the particular functions and relation that we chose were just the functions and relations that jumped into Chris's fingers as he typed up this example, but any such functions would have worked perfectly well to define an \(\mathcal{L}_{NT}\)-structure. It may well be worth your while to figure out if this \(\mathcal{L}_{NT}\)-sentence is true (whatever that means) in \(\mathfrak{A}\): \(SS0 + SS0 < SSSSS0E0 + S0\).

Example 1.6.3. We work in a language with one constant symbol, \(\mathfrak{L}\), and one unary function symbol, \(X\). So, to define a model \(\mathfrak{A}\), all we need to do is specify a universe, an element of the universe, and a function \(X^\mathfrak{A}\). Suppose that we let the universe be the collection of all finite strings of 0 or more capital letters from the Roman alphabet. So \(A\) includes such strings as: BABY, LOGICISBETTERTHANSIX, \(\varepsilon\) (the empty string), and DLKFDFAHADS. The constant symbol \(\mathfrak{L}\) will be interpreted as the string POTITION, and the function \(X^\mathfrak{A}\) is the function that adds an X to the beginning of a string. so \(X^\mathfrak{A}\)(YLOPHONE) \(=\) XYLOPHONE. Convince yourself that this is a valid, if somewhat odd, \(\mathcal{L}\)-structure.

To try to be clear about things, notice that we have \(X\), the function symbol, which is an element of the language \(\mathcal{L}\). Then there is X, the string of exactly one capital letter of the Roman alphabet, which is one of the elements of the universe. (Did you notice the change in typeface without our pointing it out? You may have a future in publishing!)

Let us look at one of the terms of the language: \(X \mathfrak{L}\). In our particular \(\mathcal{L}\)-structure \(\mathfrak{A}\) we will interpret this as

In a different structure, \(\mathfrak{B}\), it is entirely possible that the interpretation of the term \(X \mathfrak{L}\) will be HUNNY or AARDVARK or \(3 \pi / 17\). Without knowing the structure, without knowing how to interpret the symbols of the language, we cannot begin to know what object is referred to by a term.

Chaff: All of this stuff about interpreting terms in a structure will be made formal in the next section, so don't panic if it doesn't all make sense right now.

If we look at another term of the language, say \(f0\), and we try to find the element of the universe that is denoted by this term, we find that it is

This finishes defining the structure \(\mathfrak{B}\). The definition of \(R^\mathfrak{B}\) given is entirely arbitrary. We invite you to come up with a more interesting or more humorous definition on your own.