Now, we’ve used \(≤\) to decide what properties an ordering relation should have, but we should point out that most ordering relations don’t do nearly as good a job as \(≤\) does. The \(≤\) relation imposes what is known as a total order on the sets that it acts on (you should note that it can’t be used to compare complex numbers, but it can be placed between reals or any of the sets of numbers that are contained in \(\mathbb{R}\).) Most ordering relations only create what is known as a partial order on the sets they act on. In a total ordering (a.k.a. a linear ordering) every pair of elements can be compared and we can use the ordering relation to decide which order they go in. In a partial ordering there may be elements that are incomparable. 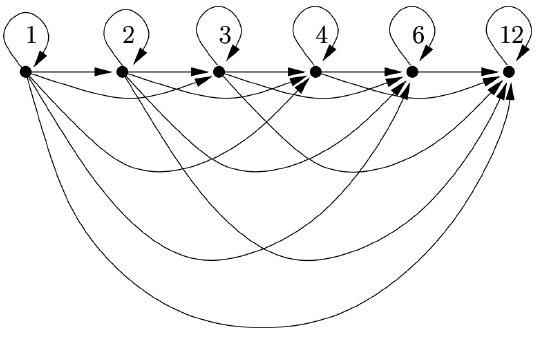 On the other hand, perhaps you noticed these numbers are the divisors of \(12\). The divisibility relation will give us our first example of a partial order. Which elements in the above partial order are incomparable?

A set together with an ordering relation creates a mathematical structure known as a partially ordered set. Since that is a bit of a mouthful, the abbreviated form poset is actually heard more commonly. If one wishes to refer to a poset it is necessary to identify both the set and the ordering relation. Thus, if \(S\) is a set and \(\text{R}\) is an ordering relation, we write \((S, \text{R})\) to denote the corresponding poset.

The digraphs given above for two posets having the same underlying set provide an existence proof – the same set may have different orders imposed upon it. They also highlight another issue – these digraphs for ordering relations get pretty crowded! Hasse diagrams for posets (named after the famous German mathematician Helmut Hasse) are a way of displaying all the information in a poset’s digraph, but much more succinctly. There are features of a Hasse diagram that correspond to each of the properties that an ordering relation must have.

Since ordering relations are always reflexive, there will always be loops at every vertex in the digraph. In a Hasse diagram, we leave out the loops.

Since ordering relations are anti-symmetric, every edge in the digraph will go in one direction or the other. In a Hasse diagram, we arrange the vertices so that that direction is upward – that way we can leave out all the arrowheads without losing any information.

The final simplification that we make in creating a Hasse diagram for a poset has to do with the transitivity property – we leave out any connections that could be deduced because of transitivity.

Hasse diagrams for the two orderings that we’ve been discussing are shown in Figure \(6.4.1\)

Often there is some feature of the elements of the set being ordered that allows us to arrange a Hasse diagram in “ranks.” For example, consider \(P(\{1, 2, 3\})\), the set of all subsets of a three element set – this set can be partially ordered using the \(⊆\) relation. (Technically, we should verify that this relation is reflexive, anti-symmetric and transitive before proceeding, but by now you know why subset containment is denoted using a rounded version of \(≤\).) Subsets of the same size can’t possibly be included one in the other unless they happen to be equal! This allows us to draw the Hasse diagram for this set with the nodes arranged in four rows. (See Figure \(6.4.2\).)

Try drawing a Hasse diagram for the partially ordered set

Posets like \((P({1, 2, 3}), ⊆)\) that can be laid out in ranks are known as graded posets. Things in a graded poset that have the same rank are always incomparable.

In the example we’ve been considering (the graded poset of subsets of a set partially ordered by set inclusion), the grading function \(ρ\) takes a subset to its size. That is, \(ρ(A) = |A|\). Another nice example of a graded poset is the set of divisors of some number partially ordered by the divisibility relation (\(|\)). In this case, the grading function takes a number to its total degree – the sum of all the exponents appearing in its prime factorization. In Figure \(6.4.3\) we show the poset of divisors of \(72\) and indicate the grading.

We will end this section by giving a small collection of terminology relevant to partially ordered sets.

In population ecology there is a partial order “predates” which basically means that one organism feeds upon another. Strictly speaking this relation is not transitive; however, if we take the point of view that when a wolf eats a sheep, it is also eating some of the grass that the sheep has fed upon, we see that in a certain sense it is transitive. A chain in this partial order is called a “food chain” and so-called apex predators are said to “sit atop the food chain”. Thus “apex predator” is a term for a maximal element in this poset. When poisons such as mercury and PCBs are introduced into an ecosystem, they tend to collect disproportionately in the apex predators – which is why pregnant women and young children should not eat shark or tuna but sardines are fine. 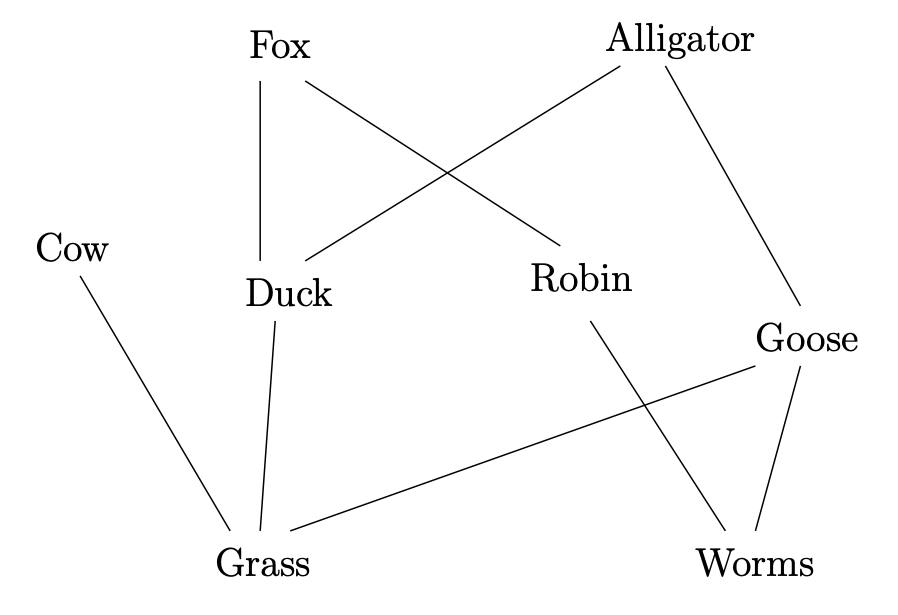 Find the largest antichain in this poset.

Referring to the poset given in Exercise \(6.4.1\), match the following.

Make a careful drawing of a hypercube – which is the name of the graph that follows the ordinary cube in this sequence.

Label the nodes of a hypercube with the divisors of \(210\) in order to produce a Hasse diagram of the poset determined by the divisibility relation.

Label the nodes of a hypercube with the subsets of \(\{a, b, c, d\}\) in order to produce a Hasse diagram of the poset determined by the subset containment relation.

Complete a Hasse diagram for the poset of divisors of \(11025\) (partially ordered by divisibility).

Find a collection of sets so that, when they are partially ordered by \(⊆\), we obtain the same Hasse diagram as in the previous problem.