So far we have been using degrees as our unit of measurement for angles. However, there is another way of measuring angles that is often more convenient. The idea is simple: associate a central angle of a circle with the arc that it intercepts.

The above relation gives us any easy way to convert between degrees and radians:

Using the conversion Equation \ref{eqn:deg2rad} for degrees to radians, we get

Using the conversion Equation \ref{eqn:rad2deg} for radians to degrees, we get

Table 4.1 shows the conversion between degrees and radians for some common angles. Using the conversion Equation \ref{eqn:rad2deg} for radians to degrees, we see that 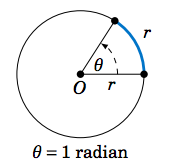 One reason why radians are used is that the scale is smaller than for degrees. One revolution in radians is \(2\pi \approx 6.283185307 \), which is much smaller than \(360 \), the number of degrees in one revolution. The smaller scale makes the graphs of trigonometric functions (which we will discuss in Chapter 5) have similar scales for the horizontal and vertical axes. Another reason is that often in physical applications the variables being used are in terms of arc length, which makes radians a natural choice.

The default mode in most scientific calculators is to use degrees for entering angles. On many calculators there is a button labeled \(\fbox{\( DRG\)}\) for switching between degree mode (D), radian mode (R), and gradian mode (G). On some graphing calculators, such as the the TI-83, there is a \(\fbox{\(MODE\)}\) button for changing between degrees and radians. Make sure that your calculator is in the correct angle mode before entering angles, or your answers will likely be way off. For example,

You should also be aware that the math functions in many computer programming languages use radians, so you would have to write your own angle conversions.