Because many applications involving circles also involve a rotation of the circle, it is natural to introduce a measure for the rotation, or angle, between two rays (line segments) emanating from the center of a circle. The angle measurement you are most likely familiar with is degrees, so we’ll begin there.

Definition: measure of an angle

of an angle is a measurement between two intersecting lines, line segments or rays, starting at the initial side and ending at the terminal side. It is a rotational measure, not a linear measure.

A degree is a measurement of angle. One full rotation around the circle is equal to 360 degrees, so one degree is 1/360 of a circle.

When measuring angles on a circle, unless otherwise directed, we measure angles in standard position: starting at the positive horizontal axis and with counter-clockwise rotation.

Give the degree measure of the angle shown on the circle. 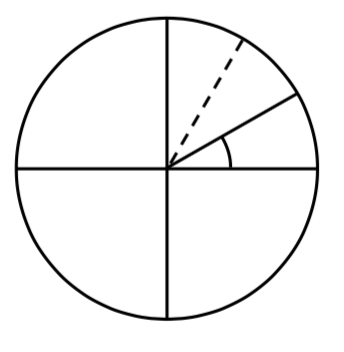 When representing angles using variables, it is traditional to use Greek letters. Here is a list of commonly encountered Greek letters.

Working with Angles in Degrees Notice that since there are 360 degrees in one rotation, an angle greater than 360 degrees would indicate more than 1 full rotation. Shown on a circle, the resulting direction in which this angle’s terminal side points would be the same as for another angle between 0 and 360 degrees. These angles would be called coterminal.

After completing their full rotation based on the given angle, two angles are coterminal if they terminate in the same position, so their terminal sides coincide (point in the same direction).

By finding the coterminal angle between 0 and 360 degrees, it can be easier to see which direction the terminal side of an angle points in. Since 45 degrees is half of 90 degrees, we can start at the positive horizontal axis and measure clockwise half of a 90 degree angle. 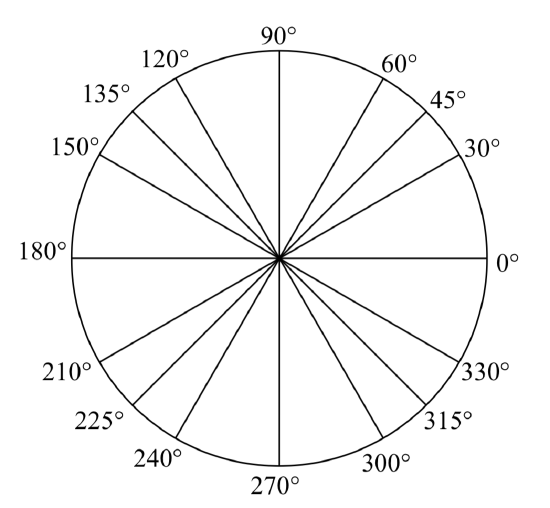 It can be helpful to have a familiarity with the frequently encountered angles in one rotation of a circle. It is common to encounter multiples of 30, 45, 60, and 90 degrees. These values are shown to the right. Memorizing these angles and understanding their properties will be very useful as we study the properties associated with angles

While measuring angles in degrees may be familiar, doing so often complicates matters since the units of measure can get in the way of calculations. For this reason, another measure of angles is commonly used. This measure is based on the distance around a circle. It is the portion of the circumference between the initial and terminal sides of the angle. Notice what happens if we find the ratio of the arclength divided by the radius of the circle:

The ratio is the same regardless of the radius of the circle – it only depends on the angle. This property allows us to define a measure of the angle based on arclength.

The radian measure of an angle is the ratio of the length of the circular arc subtended by the angle to the radius of the circle.

In other words, if s is the length of an arc of a circle, and \(r\) is the radius of the circle, then

If the circle has radius 1, then the radian measure corresponds to the length of the arc.

Because radian measure is the ratio of two lengths, it is a unitless measure. It is not necessary to write the label “radians” after a radian measure, and if you see an angle that is not labeled with “degrees” or the degree symbol, you should assume that it is a radian measure.

Considering the most basic case, the unit circle (a circle with radius 1), we know that 1 rotation equals 360 degrees, \(360^{\circ}\). We can also track one rotation around a circle by finding the circumference, \(C=2\pi r\), and for the unit circle \(C=2\pi\). These two different ways to rotate around a circle give us a way to convert from degrees to radians.

Find the radian measure of one third of a full rotation.

For any circle, the arclength along such a rotation would be one third of the circumference, \(C=\dfrac{1}{3} (2\pi r)=\dfrac{2\pi r}{3}\). The radian measure would be the arclength divided by the radius:

converting between radians and degrees

Converting Between Radians and Degrees

Remember radians are a unitless measure, so we don’t need to write “radians.”

In this example, we start with degrees and want radians so we use the other conversion\(\dfrac{\pi }{180^{\circ}}\)so that the degree units cancel and we are left with the unitless measure of radians. Just as we listed all the common angles in degrees on a circle, we should also list the corresponding radian values for the common measures of a circle corresponding to degree multiples of 30, 45, 60, and 90 degrees. As with the degree measurements, it would be advisable to commit these to memory.

We can work with the radian measures of an angle the same way we work with degrees.

Arclength and Area of a Sector

Recall that the radian measure of an angle was defined as the ratio of the arclength of a circular arc to the radius of the circle, \(\theta =\dfrac{s}{r}\). From this relationship, we can find arclength along a circle given an angle.

arclength on a circle

Mercury orbits the sun at a distance of approximately 36 million miles. In one Earth day, it completes 0.0114 rotation around the sun. If the orbit was perfectly circular, what distance through space would Mercury travel in one Earth day?

To begin, we will need to convert the decimal rotation value to a radian measure.

Combining this with the given radius of 36 million miles, we can find the arclength:

Find the arclength along a circle of radius 10 subtended by an angle of 215 degrees.

In addition to arclength, we can also use angles to find the area of a sector of a circle. A sector is a portion of a circle contained between two lines from the center, like a slice of pizza or pie.

Definition: area of a sector

The area of a sector of a circle w ith radius \(r\) subtended by an angle \(\theta\), measured in radians, is

An automatic lawn sprinkler sprays a distance of 20 feet while rotating 30 degrees. What is the area of the sector of grass the sprinkler waters?

First, we need to convert the angle measure into radians. Since 30 degrees is one of our common angles, you ideally should already know the equivalent radian measure, but if not we can convert: In central pivot irrigation, a large irrigation pipe on wheels rotates around a center point, as pictured here (http://commons.wikimedia.org/wiki/Fi..._otech_002.JPG CC-BY-SA). A farmer has a central pivot system with a radius of 400 meters. If water restrictions only allow her to water 150 thousand square meters a day, what angle should she set the system to cover?

When your car drives down a road, it makes sense to describe its speed in terms of miles per hour or meters per second. These are measures of speed along a line, also called linear velocity. When a point on a circle rotates, we would describe its angular velocity, or rotational speed, in radians per second, rotations per minute, or degrees per hour. Find the angular velocity in radians per second. (http://en.wikipedia.org/wiki/File:R%...m%C3%BChle.svg CC-BY)

Substituting this into the linear velocity equation gives

relationship between linear and angular velocity

A bicycle has wheels 28 inches in diameter. A tachometer determines the wheels are rotating at 180 RPM (revolutions per minute). Find the speed the bicycle is traveling down the road.

Here we have an angular velocity and need to find the corresponding linear velocity, since the linear speed of the outside of the tires is the speed at which the bicycle travels down the road.

We begin by converting from rotations per minute to radians per minute. It can be helpful to utilize the units to make this conversion

Using the formula from above along with the radius of the wheels, we can find the linear velocity

You may be wondering where the “radians” went in this last equation. Remember that radians are a unitless measure, so it is not necessary to include them.

Finally, we may wish to convert this linear velocity into a more familiar measurement, like miles per hour.

A satellite is rotating around the earth at 27,934 kilometers per minute at an altitude of 242 km above the earth. If the radius of the earth is 6378 kilometers, find the angular velocity of the satellite.