Many shapes, even ones as simple as circles, cannot be represented as an equation where \(y\) is a function of \(x\). Consider, for example, the path a moon follows as it orbits around a planet, which simultaneously rotates around a sun. In some cases, polar equations provide a way to represent such a path. In others, we need a more versatile approach that allows us to represent both the \(x\) and \(y\) coordinates in terms of a third variable, or parameter.

Moving at a constant speed, an object moves at a steady rate along a straight path from coordinates (-5, 3) to the coordinates (3, -1) in 4 seconds, where the coordinates are measured in meters. Find parametric equations for the position of the object. 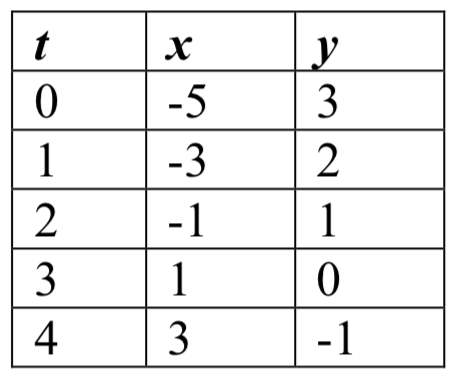 1 meter per nd, giving equation \(y(t)=3−t\). Together, these are the parametric equations for the position of the object:

Using these equations, we can build a table of \(t\), \(x\), and \(y\) values. Because of the context, we limited ourselves to non-negative \(t\) values for this example, but in general you can use any values. 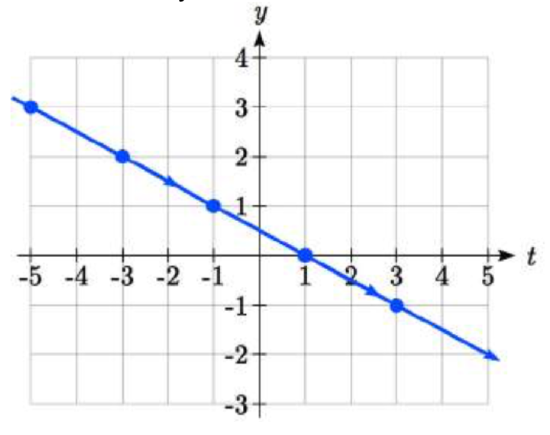 There is often no single parametric representation for a curve. In Example 1 we assumed the object was moving at a steady rate along a straight line. If we kept the assumption about the path (straight line) but did not assume the speed was constant, we might get a system like: aph of the curve, and indicate the direction of motion with respect to time by using arrows.

These equations should look familiar. Back when we first learned about sine and cosine we found that the coordinates o This suggests that for each value of \(t\), these parametric equations give a point on a circle of ra While creating a \(t-x-y\) table, plotting points and connecting the dots with a smooth curve usually works to give us a rough idea of what the graph of a system of parametric equations looks like, it's generally easier to use technology to create these tables and (simultaneously) much nicer-looking graphs.

Notice first that this equation looks very similar to the ones from the previous example, except the coefficients are not equ Using technology we can generate a graph of this equation, verifying it is indeed an ellipse. The populations of rabbits and wolves on an island over time are given by the graphs below. Use these graphs to sketch a graph in the r-w plane showing the relationship between the number of rabbits and number of wolves.

For each input \(t\), we can determine the number of rabbits, \(r\), and the number of wolves, \(w\), from the respective graphs, and then plot the corresponding point in the \(r-w\) plane. 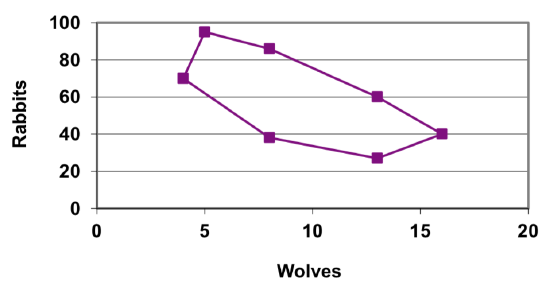 This graph helps reveal the cyclical interaction between the two populations.

Converting from Parametric to Cartesian

In some cases, it is possible to eliminate the parameter \(t\), allowing you to write a pair of parametric equations as a Cartesian equation.

It is easiest to do this if one of the \(x(t)\) or \(y(t)\) functions can easily be solved for \(t\), allowing you to then substitute the remaining expression into the second part.

Here, the equation for \(y\) is linear, so is relatively easy to solve for \(t\). Since the resulting Cartesian equation will likely not be a function, and for convenience, we drop the function notation.

Notice that this is the equation of a parabola with \(x\) as a function of \(y\), with vertex at (1,2), opening to the right. Comparing this with the graph from Example 2, we see (unsurprisingly) that it yields the same graph in the \(x-y\) plane as did the original parametric equations.

We could solve either the first or second equation for \(t\). Solving the first,

Starting with the Pythagorean identity,

This is a Cartesian equation for the ellipse we graphed earlier.

If the Cartesian equation gives one variable as a function of the other, then parameterization is trivial – the independent variable in the function can simply be defined as \(t\).

In addition to parameterizing Cartesian equations, we also can parameterize behaviors and movements.

A robot follows the path shown. Create a table of values for the \(x(t)\) and \(y(t)\) functions, assuming the robot takes one second to make each movement. Notice how this also ties back to vectors. The journey of the robot as it moves through the Cartesian plane could also be displayed as vectors and total distance traveled and displacement could be calculated.

A light is placed on the edge of a bicycle tire as shown and the bicycle starts rolling down the street. Find a parametric equation for the position of the light after the wheel has rotated through an angle of \(\theta\).

The result graph is called a cycloid. For this example, we’ll assume the orbits are circular, though in real life they’re actually elliptical. The resulting graph is shown here.

A wheel of radius 4 is rolled around the outside of a circle of radius 7. Find a parametric equation for the position of a point on the boundary of the smaller wheel. This shape is called an epicycloid.