Let us consider to the example of a mass on a spring. We now examine the case of forced oscillations, which we did not yet handle. That is, we consider the equation

What we are interested in is periodic forcing, such as noncentered rotating parts, or perhaps loud sounds, or other sources of periodic force. Once we learn about Fourier series in Chapter 4, we will see that we cover all periodic functions by simply considering \(F(t) = F_0 \cos (\omega t)\) (or sine instead of cosine, the calculations are essentially the same).

First let us consider undamped \(c = 0\) motion for simplicity. We have the equation

where \(\omega_0 = \sqrt { \frac {k}{m}}\) is the natural frequency (angular), which is the frequency at which the system “wants to oscillate” without external interference.

Let us suppose that \(\omega_0 \neq \omega \). We try the solution \(x_p = A \cos (\omega t) \) and solve for \(A\). Note that we need not have sine in our trial solution as on the left hand side we will only get cosines anyway. If you include a sine it is fine; you will find that its coefficient will be zero.

We solve using the method of undetermined coefficients. We find that

We leave it as an exercise to do the algebra required.

The general solution is

or written another way

Hence it is a superposition of two cosine waves at different frequencies. 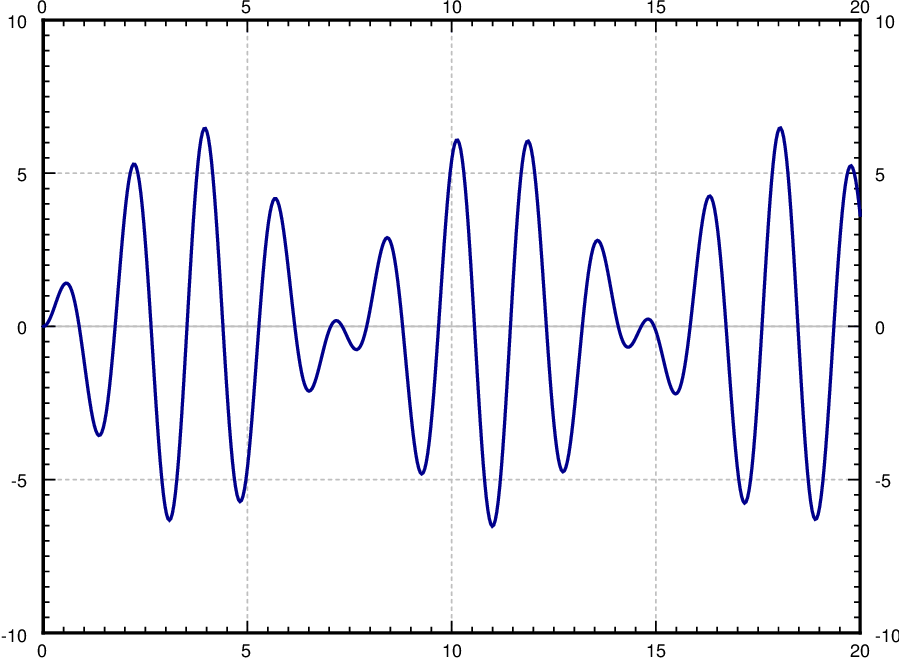 Notice the “beating” behavior in Figure \(\PageIndex{2}\). First use the trigonometric identity

Plugging \( x_p\) into the left hand side we get By forcing the system in just the right frequency we produce very wild oscillations. This kind of behavior is called resonance or perhaps pure resonance. Sometimes resonance is desired. For example, remember when as a kid you could start swinging by just moving back and forth on the swing seat in the “correct frequency”? You were trying to achieve resonance. The force of each one of your moves was small, but after a while it produced large swings.

A common (but wrong) example of destructive force of resonance is the Tacoma Narrows bridge failure. It turns out there was a different phenomenon at play.\(^{1}\)

In real life things are not as simple as they were above. There is, of course, some damping. Our equation becomes

Thus our particular solution is

The exact formula is not as important as the idea. Do not memorize the above formula, you should instead remember the ideas involved. For different forcing function \( F\), you will get a different formula for \( x_p\). So there is no point in memorizing this specific formula. You can always recompute it later or look it up if you really need it.

We note that \( x_c = x_{tr} \) goes to zero as \( t \rightarrow \infty \), as all the terms involve an exponential with a negative exponent. Hence for large \(t\), the effect of \( x_{tr} \) is negligible and we will essentially only see \(x_{sp}\). Hence the name transient. Notice that \( x_{sp}\) involves no arbitrary constants, and the initial conditions will only affect \(x_{tr} \). This means that the effect of the initial conditions will be negligible after some period of time. Because of this behavior, we might as well focus on the steady periodic solution and ignore the transient solution. See Figure \(\PageIndex{4}\) for a graph of different initial conditions. To find the maximum we need to find the derivative \( C' (\omega ) \). Computation shows

Another interesting observation to make is that when \(\omega\to\infty\), then \(\omega\to 0\). This means that if the forcing frequency gets too high it does not manage to get the mass moving in the mass-spring system. This is quite reasonable intuitively. If we wiggle back and forth really fast while sitting on a swing, we will not get it moving at all, no matter how forceful. Fast vibrations just cancel each other out before the mass has any chance of responding by moving one way or the other.

The behavior is more complicated if the forcing function is not an exact cosine wave, but for example a square wave. A general periodic function will be the sum (superposition) of many cosine waves of different frequencies. The reader is encouraged to come back to this section once we have learned about the Fourier series.