A spherical balloon is being filled with air at the constant rate of \(2cm^3/sec\) (Figure). How fast is the radius increasing when the radius is \(3cm\)?

What is the instantaneous rate of change of the radius when \(r=6cm\)?

Example \(\PageIndex{3}\): An Airplane Flying at a Constant Elevation Step 2. Since \(x\) denotes the horizontal distance between the man and the point on the ground below the plane, \(dx/dt\) represents the speed of the plane. We are told the speed of the plane is 600 ft/sec. Therefore, \(\frac{dx}{dt}=600\) ft/sec. Since we are asked to find the rate of change in the distance between the man and the plane when the plane is directly above the radio tower, we need to find \(ds/dt\) when \(x=3000ft.\)

Step 4. Differentiating this equation with respect to time and using the fact that the derivative of a constant is zero, we arrive at the equation

Note: When solving related-rates problems, it is important not to substitute values for the variables too soon. For example, in step 3, we related the variable quantities \(x(t)\) and \(s(t)\) by the equation

Since the plane remains at a constant height, it is not necessary to introduce a variable for the height, and we are allowed to use the constant 4000 to denote that quantity. However, the other two quantities are changing. If we mistakenly substituted \(x(t)=3000\) into the equation before differentiating, our equation would have been 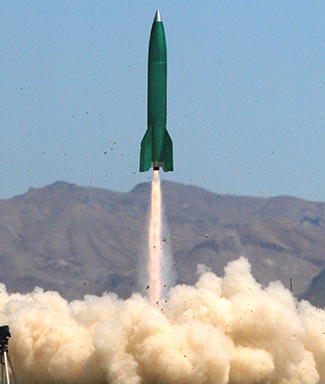 Figure \(\PageIndex{4}\): A camera is positioned 5000 ft from the launch pad of the rocket. The height of the rocket and the angle of the camera are changing with respect to time. We denote those quantities with the variables \(h\) and \(θ\),respectively. Oil spilled from a tanker spreads in a circle whose area increases at a constant rate of \( 6 \,km^2/h\). How fast the circumference increasing when the radius is \(3\, km\).

Oil spilled from a tanker spreads in a circle whose circumference increases at a constant rate of \( 6 \,km/h\). How fast the area increasing when the radius is \(3\, km\).