Much of calculus is devoted to learning mathematical techniques that are applied in later courses in mathematics and the sciences; you wouldn't have time to learn much calculus if you insisted on seeing a specific application of every topic covered in the course. Similarly, much of this section is devoted to methods that can be applied in later courses. Only a relatively small part of the section is devoted to the derivation of specific differential equations from mathematical models or relating the differential equations that we study to specific applications. In this section, we mention a few such applications.

The mathematical model for an applied problem is almost always simpler than the actual situation being studied, since simplifying assumptions are usually required to obtain a mathematical problem that can be solved. For example, in modelling the motion of a falling object, we might neglect air resistance and the gravitational pull of celestial bodies other than Earth, or in modeling population growth we might assume that the population grows continuously rather than in discrete steps.

1. It's sufficiently simple so that the mathematical problem can be solved.

2. It represents the actual situation sufficiently well so that the solution to the mathematical problem predicts the outcome of the real problem to within a useful degree of accuracy. If results predicted by the model don't agree with physical observations, the underlying assumptions of the model must be revised until satisfactory agreement is obtained.

Although the number of members of a population (people in a given country, bacteria in a laboratory culture, wildflowers in a forest, etc.) at any given time \(t\) is necessarily an integer, models that use differential equations to describe the growth and decay of populations usually rest on the simplifying assumption that the number of members of the population can be regarded as a differentiable function \(P=P(t)\). In most models, it is assumed that the differential equation takes the form

where \(a\) is a continuous function of \(P\) that represents the rate of change of population per unit time per individual. In the \( \textcolor{blue}{\mbox{Malthusian model}} \) (https://en.wikipedia.org/wiki/Thomas_Robert_Malthus), it is assumed that \(a(P)\) is a constant, so equation \ref{3.1.1} becomes

To see the limitations of the Malthusian model, suppose we're modeling the population of a country, starting from a time \(t=0\) when the birth rate exceeds the death rate (so \(a>0\)), and the country's resources in terms of space, food supply, and other necessities of life can support the existing population. Then the prediction \(P=P_0e^{at}\) may be reasonably accurate as long as it remains within limits that the country's resources can support. However, the model must inevitably lose validity when the prediction exceeds these limits. (If nothing else, eventually there won't be enough space for the predicted population!)

This flaw in the Malthusian model suggests the need for a model that accounts for limitations of space and resources that tend to oppose the rate of population growth as the population increases. Perhaps the most famous model of this kind is the \( \textcolor{blue}{\mbox{Verhulst model}} \) (http://www-history.mcs.st-and.ac.uk/.../Verhulst.html) where equation \ref{3.1.2} is replaced by 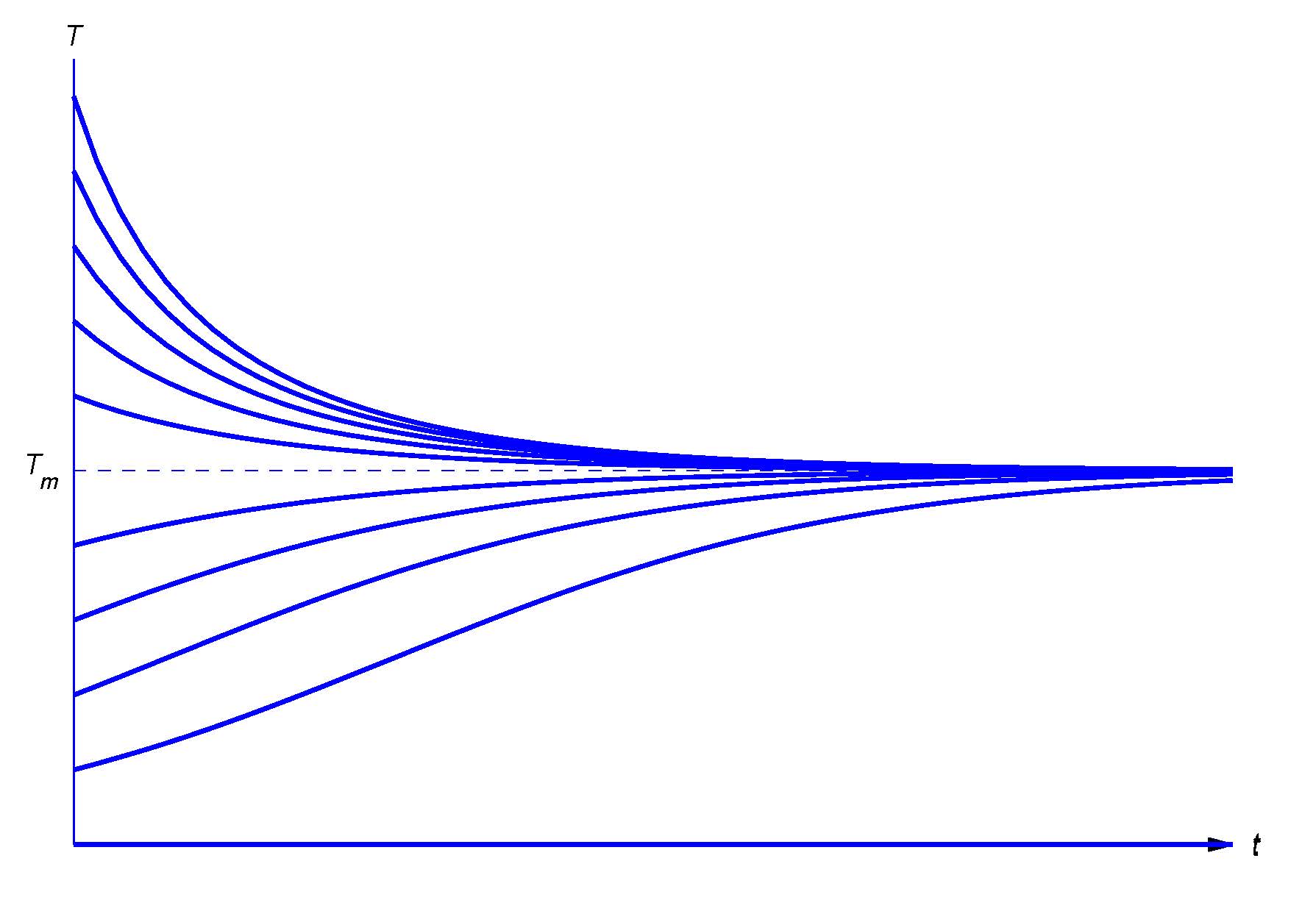 Assuming that the medium remains at constant temperature seems reasonable if we're considering a cup of coffee cooling in a room, but not if we're cooling a huge cauldron of molten metal in the same room. The difference between the two situations is that the heat lost by the coffee isn't likely to raise the temperature of the room appreciably, but the heat lost by the cooling metal is. In this second situation, we must use a model that accounts for the heat exchanged between the object and the medium. Let \(T=T(t)\) and \(T_m=T_m(t)\) be the temperatures of the object and the medium respectively, and let \(T_0\) and \(T_{m0}\) be their initial values. Again, we assume that \(T\) and \(T_m\) are related by equation \( (5) \). We also assume that the change in heat of the object as its temperature changes from \(T_0\) to \(T\) is \(a(T-T_0)\) and the change in heat of the medium as its temperature changes from \(T_{m0}\) to \(T_m\) is \(a_m(T_m-T_{m0})\), where \(a\) and \(a_m\) are positive constants depending upon the masses and thermal properties of the object and medium respectively. If we assume that the total heat of the in the object and the medium remains constant (that is, energy is conserved), then

Solving this for \(T_m\) and substituting the result into Equation \ref{3.1.6} yields the differential equation

for the temperature of the object. After learning to solve linear ﬁrst order equations, you’ll be able to show (Exercise 4.2.17) that

Glucose Absorption by the Body

From calculus you know that if \(c\) is any constant then

Now let's complicate matters by injecting glucose intravenously at a constant rate of \(r\) units of glucose per unit of time. Then the rate of change of the amount of glucose in the bloodstream per unit time is

where the first term on the right is due to the absorption of the glucose by the body and the second term is due to the injection. After you've studied Section~3.1, Exercise~3.2.8, you’ll be able to show that the solution of Equation \ref{3.1.9} that satisfies \(G(0) = G_0\) is

Since \(\lim_{t\to\infty}I(t)=S\), this model predicts that all the susceptible people eventually become infected.

According to \( \textcolor{blue}{\mbox{Newton's second law of motion}} \) (http://www-history.mcs.st-and.ac.uk/...es/Newton.html), the instantaneous acceleration \(a\) of an object with constant mass \(m\) is related to the force \(F\) acting on the object by the equation \(F=ma\). For simplicity, let's assume that \(m=1\) and the motion of the object is along a vertical line. Let \(y\) be the displacement of the object from some reference point on Earth's surface, measured positive upward. In many applications, there are three kinds of forces that may act on the object:

(b) A force such as atmospheric resistance that depends on the position and velocity of the object, which we write as \(-q(y,y')y'\), where \(q\) is a nonnegative function and we've put \(y'\) "outside'' to indicate that the resistive force is always in the direction opposite to the velocity.

In this case, Newton’s second law implies that

which is usually rewritten as

Since the second (and no higher) order derivative of \(y\) occurs in this equation, we say that it is a second order differential equation.

Let \(P=P(t)\) and \(Q=Q(t)\) be the populations of two species at time \(t\), and assume that each population would grow exponentially if the other didn't exist; that is, in the absence of competition we would have

where \(a\) and \(b\) are positive constants. One way to model the effect of competition is to assume that the growth rate per individual of each population is reduced by an amount proportional to the other population, so equation \ref{3.1.10} is replaced by