In general, we make the following definition: 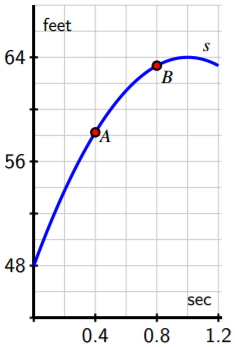 To find the instantaneous velocity at \(t=a\), we investigate what happens as the value of \(h\) approaches zero.

c. Make a conjecture about the instantaneous velocuty at \(t=0.5\).

a. We make the assumptions that \(-0.5 < h < 0.5\) and \(h \neq 0\) because \(h\) cannot be zero (otherwise there is no interval on which to compute average velocity) and because the function only makes sense on the time interval \(0 \leq t \leq 1\), as this is the duration of time during which the ball is falling. We want to compute and simplify

At this point, we note two things: first, the expression for average velocity clearly depends on \(h\), which it must, since as \(h\) changes the average velocity will change. Further, we note that since \(h\) can never equal zero, we may remove the common factor of \(h\) from the numerator and denominator. It follows that