The state that a given substance exhibits is also a physical property. Some substances exist as gases at room temperature (oxygen and carbon dioxide), while others, like water and mercury metal, exist as liquids. Most metals exist as solids at room temperature. All substances can exist in any of these three states. Figure \(\PageIndex{2}\) shows the differences among solids, liquids, and gases at the molecular level. A solid has definite volume and shape, a liquid has a definite volume but no definite shape, and a gas has neither a definite volume nor shape.

Figure \(\PageIndex{2}\): A Representation of the Solid, Liquid, and Gas States. (a) Solid O2 has a fixed volume and shape, and the molecules are packed tightly together. (b) Liquid O2 conforms to the shape of its container but has a fixed volume; it contains relatively densely packed molecules. (c) Gaseous O2 fills its container completely—regardless of the container’s size or shape—and consists of widely separated molecules.

Plasma: A Fourth State of Matter

Technically speaking, a fourth state of matter called plasma exists, but it does not naturally occur on earth, so we will omit it from our study here. 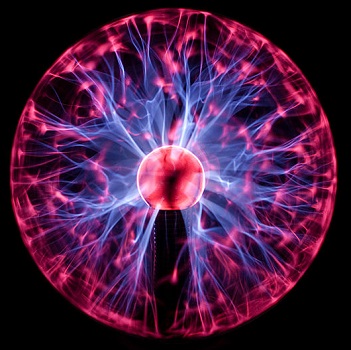 Solids are defined by the following characteristics:

If we were to cool liquid mercury to its freezing point of \(-39^\text{o} \text{C}\), and under the right pressure conditions, we would notice all of the liquid particles would go into the solid state. Mercury can be solidified when its temperature is brought to its freezing point. However, when returned to room temperature conditions, mercury does not exist in solid state for long, and returns back to its more common liquid form.

Solids usually have their constituent particles arranged in a regular, three-dimensional array of alternating positive and negative ions called a crystal. The effect of this regular arrangement of particles is sometimes visible macroscopically, as shown in Figure \(\PageIndex{3}\). Some solids, especially those composed of large molecules, cannot easily organize their particles in such regular crystals and exist as amorphous (literally, “without form”) solids. Glass is one example of an amorphous solid. 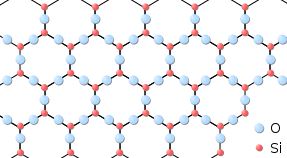 Figure \(\PageIndex{3}\): (left) The periodic crystalline lattice structure of quartz \(SiO_2\) in two-dimensions. (right) The random network structure of glassy \(SiO_2\) in two-dimensions. Note that, as in the crystal, each Silicon atom is bonded to 4 oxygen atoms, where the fourth oxygen atom is obscured from view in this plane. Images used with permission (public domain).

Liquids have the following characteristics:

A familiar liquid is mercury metal. Mercury is an anomaly. It is the only metal we know of that is liquid at room temperature. Mercury also has an ability to stick to itself (surface tension)—a property that all liquids exhibit. Mercury has a relatively high surface tension, which makes it very unique. Here you see mercury in its common liquid form.

If we heat liquid mercury to its boiling point of \(357^\text{o} \text{C}\) under the right pressure conditions, we would notice all particles in the liquid state go into the gas state.

If the particles of a substance have enough energy to completely overcome intermolecular interactions, then the particles can separate from each other and move about randomly in space. This describes the gas state, which we will consider in more detail elsewhere. Like liquids, gases have no definite shape, but unlike solids and liquids, gases have no definite volume either. The change from solid to liquid usually does not significantly change the volume of a substance. However, the change from a liquid to a gas significantly increases the volume of a substance, by a factor of 1,000 or more. Gases have the following characteristics:

What state or states of matter does each statement, describe?