You learned earlier that all matter in the universe is made out of tiny building blocks called atoms. All modern scientists accept the concept of the atom, but when the concept of the atom was first proposed about 2,500 years ago, ancient philosophers laughed at the idea. It has always been difficult to convince people of the existence of things that are too small to see. We will spend some time considering the evidence (observations) that convince scientists of the existence of atoms.

Democritus and the Greek Philosophers

About 2,500 years ago, early Greek philosophers believed the entire universe was a single, huge, entity. In other words, "everything was one." They believed that all objects, all matter, and all substances were connected as a single, big, unchangeable "thing." One of the first people to propose "atoms" was a man known as Democritus. As an alternative to the beliefs of the Greek philosophers, he suggested that atomos, or atomon—tiny, indivisible, solid objects—make up all matter in the universe. 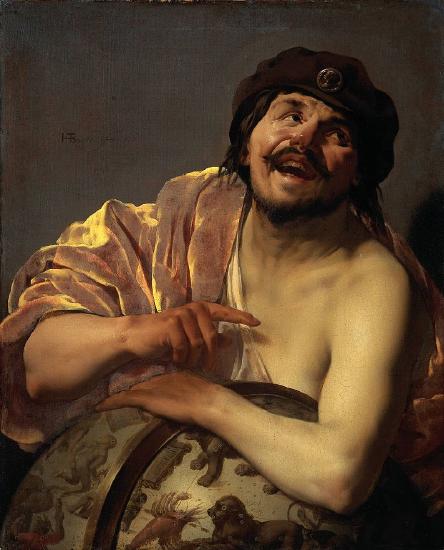 Figure \(\PageIndex{1}\): (left) Democritus by Hendrick ter Brugghen, 1628. Democritus was known as the "laughing philosopher." It was a good thing he liked to laugh, because most other philosophers were laughing at his theories. (right) British physicist and chemist John Dalton (1766-1844). Unlike the Greek philosophers, John Dalton believed in both logical thinking and experimentation.

Democritus then reasoned that changes occur when the many atomos in an object were reconnected or recombined in different ways. Democritus even extended this theory, suggesting that there were different varieties of atomos with different shapes, sizes, and masses. He thought, however, that shape, size, and mass were the only properties differentiating the different types of atomos. According to Democritus, other characteristics, like color and taste, did not reflect properties of the atomos themselves, but rather, resulted from the different ways in which the atomos were combined and connected to one another.

The early Greek philosophers tried to understand the nature of the world through reason and logic, but not through experiment and observation. As a result, they had some very interesting ideas, but they felt no need to justify their ideas based on life experiences. In a lot of ways, you can think of the Greek philosophers as being "all thought and no action." It's truly amazing how much they achieved using their minds, but because they never performed any experiments, they missed or rejected a lot of discoveries that they could have made otherwise. Greek philosophers dismissed Democritus' theory entirely. Sadly, it took over two millennia before the theory of atomos (or "atoms," as they are known today) was fully appreciated.

Greeks: "All Thought and No Action"

Greek philosophers were "all thought and no action" and did not feel the need to test their theories with reality. In contrast, Dalton's efforts were based on experimentation and testing ideas against reality.

While it must be assumed that many more scientists, philosophers, and others studied composition of matter after Democritus, a major leap forward in our understanding of the composition of matter took place in the 1800's with the work of the British scientists John Dalton. He started teaching school at age twelve, and was primarily known as a teacher. In his twenties, he moved to the growing city of Manchester, where he was able to pursue some scientific studies. His work in several areas of science brought him a number of honors. When he died, over 40,000 people in Manchester marched at his funeral.

The modern atomic theory, proposed about 1803 by the English chemist John Dalton (Figure \(\PageIndex{1}\)), is a fundamental concept that states that all elements are composed of atoms. Previously, we defined an atom as the smallest part of an element that maintains the identity of that element. Individual atoms are extremely small; even the largest atom has an approximate diameter of only 5.4 × 10−10 m. With that size, it takes over 18 million of these atoms, lined up side by side, to equal the width of your little finger (about 1 cm).

Dalton studied the weights of various elements and compounds. He noticed that matter always combined in fixed ratios based on weight, or volume in the case of gases. Chemical compounds always contain the same proportion of elements by mass, regardless of amount, which provided further support for Proust's law of definite proportions. Dalton also observed that there could be more than one combination of two elements.

From his experiments and observations, as well as the work from peers of his time, Dalton proposed a new theory of the atom. This later became known as Dalton's atomic theory. The general tenets of this theory were as follows:

Dalton's atomic theory has been largely accepted by the scientific community, with the exception of three changes. We know now that (1) an atom can be further subdivided, (2) all atoms of an element are not identical in mass, and (3) using nuclear fission and fusion techniques, we can create or destroy atoms by changing them into other atoms. Figure \(\PageIndex{2}\): Dalton's symbols from his text "A New System of Chemical Philosophy."

The evidence for atoms is so great that few doubt their existence. In fact, individual atoms are now routinely observed with state-of-the art technologies. Moreover, they can even be used for making pretty images; or as IBM research demonstrates in Video \(\PageIndex{1}\), control of individual atoms can be use used create animations.

A Boy and His Atom is a 2012 stop-motion animated short film released by IBM Research. The movie tells the story of a boy and a wayward atom who meet and become friends. It depicts a boy playing with an atom that takes various forms. It was made by moving carbon monoxide molecules viewed with a scanning tunneling microscope, a device that magnifies them 100 million times. These molecules were moved to create images, which were then saved as individual frames to make the film.