Gases were among the first substances studied in terms of the modern scientific method, which was developed in the 1600s. It did not take long to recognize that gases all shared certain physical behaviors, suggesting that all gases could be described by one all-encompassing theory. Today, that theory is the kinetic theory of gases. It is based on the following statements:

Figure \(\PageIndex{1}\) shows a representation of how we mentally picture the gas phase. 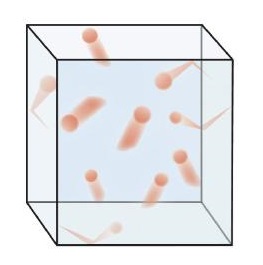 Figure \(\PageIndex{1}\): The Kinetic Theory of Gases. The kinetic theory of gases describes this state of matter as composed of tiny particles in constant motion with a lot of distance between the particles.

This model of gases explains some of the physical properties of gases. Because most of a gas is empty space, a gas has a low density and can expand or contract under the appropriate influence. The fact that gas particles are in constant motion means that two or more gases will always mix, as the particles from the individual gases move and collide with each other.