Perhaps you have eaten too much pizza and felt very uncomfortable hours later. This feeling is due to excess stomach acid being produced. The discomfort can be dealt with by taking an antacid. The base in the antacid will react with the \(\ce{HCl}\) in the stomach and neutralize it, taking care of that unpleasant feeling.

Bases have properties that mostly contrast with those of acids. Figure \(\PageIndex{1}\): Phenolphthalein indicator in presence of base.

Tasting chemicals and touching them are NOT good lab practices and should be avoided—in other words—don't do this at home.

Bases are less common as foods, but they are nonetheless present in many household products. Many cleaners contain ammonia, a base. Sodium hydroxide is found in drain cleaner. Antacids, which combat excess stomach acid, are comprised of bases such as magnesium hydroxide or sodium hydrogen carbonate. Various common bases and corresponding uses are given in Table \(\PageIndex{2}\).

Sodium hydroxide, also known as lye and caustic soda, is an inorganic compound with formula \(\ce{NaOH}\). It is a white solid ionic compound consisting of sodium cations \(\ce{Na^{+}}\) and hydroxide anions \(\ce{OH^{−}}\).

Dissolution of solid sodium hydroxide in water is a highly exothermic reaction:

The resulting solution is usually colorless and odorless and feels slippery when it comes in contact with skin. Potassium hydroxide is an inorganic compound with the formula \(\ce{KOH}\), and is commonly called caustic potash. Along with sodium hydroxide (NaOH), this colorless solid is a prototypical strong base. It has many industrial and niche applications, most of which exploit its corrosive nature and its reactivity toward acids. Its dissolution in water is strongly exothermic. 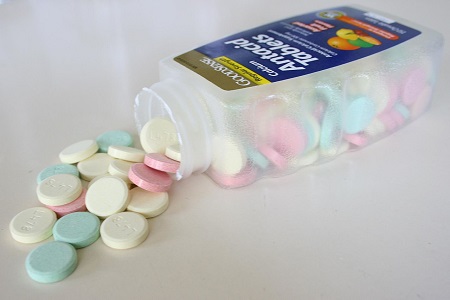 It is a white solid with low solubility in water. Combining a solution of many magnesium salts with basic water induces precipitation of solid \(\ce{Mg(OH)2}\). However, a weak concentration of dissociated ions can be found in solution:

Calcium hydroxide (traditionally called slaked lime) is an inorganic compound with the chemical formula \(\ce{Ca(OH)2}\). It is a colorless crystal or white powder. It has many names including hydrated lime, caustic lime, builders' lime, slaked lime, cal, or pickling lime. Calcium hydroxide is used in many applications, including food preparation. Limewater is the common name for a saturated solution of calcium hydroxide.

Calcium hydroxide is relatively insoluble in water, but is large enough that its solutions are basic according to the following reaction:

Ammonia is a compound of nitrogen and hydrogen with the formula \(\ce{NH3}\) and is a colorless gas with a characteristic pungent smell. It is the active product of “smelling salts,” and can quickly revive the faint of heart and light of head. Although common in nature and in wide use, ammonia is both caustic and hazardous in its concentrated form. In aqueous solution, ammonia acts as a base, acquiring hydrogen ions from \(\ce{H_2O}\) to yield ammonium and hydroxide ions:

Ammonia is also a building block for the synthesis of many pharmaceutical products and is used in many commercial cleaning products.