We have spent considerable time considering the derivatives of a function and their applications. In the following chapters, we are going to starting thinking in "the other direction." That is, given a function \(f(x)\), we are going to consider functions \(F(x)\) such that \(F'(x) = f(x)\). There are numerous reasons this will prove to be useful: these functions will help us compute areas, volumes, mass, force, pressure, work, and much more.

Solving a differential equation amounts to finding a function \(y\) that satisfies the given equation. Take a moment and consider that equation; can you find a function \(y\) such that \(y' = 2x\)?

Can you find another?

The set of all antiderivatives of \(f(x)\) is the indefinite integral of \(f\), denoted by

Knowing one antiderivative of \(f\) allows us to find infinitely more, simply by adding a constant. Not only does this give us more antiderivatives, it gives us all of them. 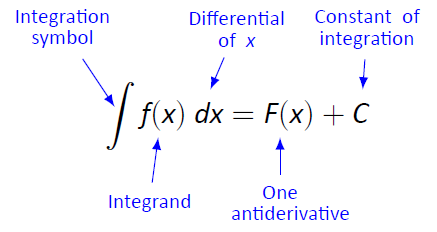 Figure \(\PageIndex{1}\) shows the typical notation of the indefinite integral. The integration symbol, \(\int\), is in reality an "elongated S," representing "take the sum." We will later see how sums and antiderivatives are related.

The function we want to find an antiderivative of is called the integrand. It contains the differential of the variable we are integrating with respect to. The \(\int\) symbol and the differential \(dx\) are not "bookends" with a function sandwiched in between; rather, the symbol \(\int\) means "find all antiderivatives of what follows," and the function \(f(x)\) and \(dx\) are multiplied together; the \(dx\) does not "just sit there."

A commonly asked question is "What happened to the \(dx\)?" The unenlightened response is "Don't worry about it. It just goes away." A full understanding includes the following.

This process of antidifferentiation is really solving a differential question. The integral

Understanding all of this is more important later as we try to find antiderivatives of more complicated functions. In this section, we will simply explore the rules of indefinite integration, and one can succeed for now with answering "What happened to the \(dx\)?" with "It went away."

We seek a function \(F(x)\) whose derivative is \(3x^2+4x+5\). When taking derivatives, we can consider functions term--by--term, so we can likely do that here.

Our answer appears to be

We do not need three separate constants of integration; combine them as one constant, giving the final answer of

This final step of "verifying our answer" is important both practically and theoretically. In general, taking derivatives is easier than finding antiderivatives so checking our work is easy and vital as we learn.

We also see that taking the derivative of our answer returns the function in the integrand. Thus we can say that:

We highlight a few important points from Theorem \(\PageIndex{2}\):

We can find the answer if we provide more information with the question, as done in the following example. Often the additional information comes in the form of an initial value, a value of the function that one knows beforehand.

When did the object begin moving down? Immediately after \(v(t) = 0\):

Recognize that we are able to determine quite a bit about the path of the object knowing just its acceleration and its velocity at a single point in time.

This section introduced antiderivatives and the indefinite integral. We found they are needed when finding a function given information about its derivative(s). For instance, we found a position function given a velocity function.

In the next section, we will see how position and velocity are unexpectedly related by the areas of certain regions on a graph of the velocity function. Then, in Section 5.4, we will see how areas and antiderivatives are closely tied together.