We are familiar with sketching shapes, such as parabolas, by following this basic procedure:

The rectangular equation \(y=f(x)\) works well for some shapes like a parabola with a vertical axis of symmetry, but in the previous section we encountered several shapes that could not be sketched in this manner. (To plot an ellipse using the above procedure, we need to plot the "top'' and "bottom'' separately.)

In this section we introduce a new sketching procedure:

Here, \(x\) and \(y\) are found separately but then plotted together. This leads us to a definition.

This is a formal definition of the word curve. When a curve lies in a plane (such as the Cartesian plane), it is often referred to as a plane curve. Examples will help us understand the concepts introduced in the definition.

SOLUTION
We plot the graphs of parametric equations in much the same manner as we plotted graphs of functions like \(y=f(x)\): we make a table of values, plot points, then connect these points with a "reasonable'' looking curve. Figure 9.20(a) shows such a table of values; note how we have 3 columns.

The points \((x,y)\) from the table are plotted in Figure 9.20(b). The points have been connected with a smooth curve. Each point has been labeled with its corresponding \(t\)-value. These values, along with the two arrows along the curve, are used to indicate the orientation of the graph. This information helps us determine the direction in which the graph is "moving.'' Figure 9.20: A table of values of the parametric equations in Example 9.2.1 along with a sketch of their graph.

We often use the letter \(t\) as the parameter as we often regard \(t\) as representing time. Certainly there are many contexts in which the parameter is not time, but it can be helpful to think in terms of time as one makes sense of parametric plots and their orientation (for instance, "At time \(t=0\) the position is \((1,2)\) and at time \(t=3\) the position is \((5,1)\).''). Figure 9.21: A table of values of the parametric equations in Example 9.2.2 along with a sketch of their graph.

It is not difficult to show that the curves in Examples \(\PageIndex{1}\) and \(\PageIndex{2}\) are portions of the same parabola. While the parabola is the same, the curves are different. In Example \(\PageIndex{1}\), if we let \(t\) vary over all real numbers, we'd obtain the entire parabola. In this example, letting \(t\) vary over all real numbers would still produce the same graph; this portion of the parabola would be traced, and re--traced, infinitely. The orientation shown in Figure 9.21 shows the orientation on \([0,\pi]\), but this orientation is reversed on \([\pi,2\pi]\).

These examples begin to illustrate the powerful nature of parametric equations. Their graphs are far more diverse than the graphs of functions produced by "\(y=f(x)\)" functions.

Technology Note: Most graphing utilities can graph functions given in parametric form. Often the word "parametric'' is abbreviated as "PAR'' or "PARAM'' in the options. The user usually needs to determine the graphing window (i.e, the minimum and maximum \(x\)- and \(y\)-values), along with the values of \(t\) that are to be plotted. The user is often prompted to give a \(t\) minimum, a \(t\) maximum, and a "\(t\)-step'' or "\(\Delta t\).'' Graphing utilities effectively plot parametric functions just as we've shown here: they plots lots of points. A smaller \(t\)-step plots more points, making for a smoother graph (but may take longer). In Figure 9.20, the \(t\)-step is 1; in Figure 9.21, the \(t\)-step is \(\pi/4\).

One nice feature of parametric equations is that their graphs are easy to shift. While this is not too difficult in the "\(y=f(x)\)" context, the resulting function can look rather messy. (Plus, to shift to the right by two, we replace \(x\) with \(x-2\), which is counter--intuitive.) The following example demonstrates this. 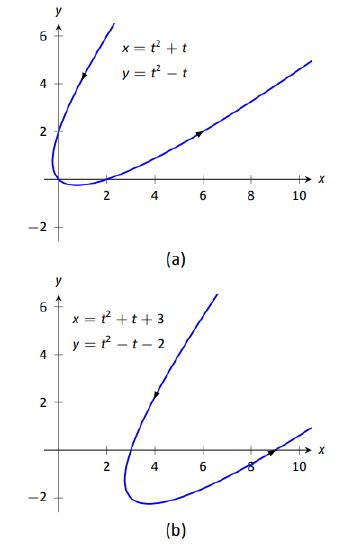 Because the \(x\)- and \(y\)-values of a graph are determined independently, the graphs of parametric functions often possess features not seen on "\(y=f(x)\)" type graphs. The next example demonstrates how such graphs can arrive at the same point more than once.

Example \(\PageIndex{4}\): Graphs that cross themselves

SOLUTION
Using the methods developed in this section, we again plot points and graph the parametric equations as shown in Figure 9.23. It appears that the graph crosses itself at the point \((2,6)\), but we'll need to analytically determine this. Converting between Rectangular and Parametric Equations

We sometimes chose the parameter to accurately model physical behavior. There is not a set way to eliminate a parameter. One method is to solve for \(t\) in one equation and then substitute that value in the second. We use that technique here, then show a second, simpler method. Figure 9.25: Graphing parametric and rectangular equations for a graph in Example 9.2.7 This final equation should look familiar -- it is the equation of an ellipse! Figure 9.26 plots the parametric equations, demonstrating that the graph is indeed of an ellipse with a horizontal major axis and center at \((3,1)\).

Figure 9.27 gives a small gallery of "interesting'' and "famous'' curves along with parametric equations that produce them. Interested readers can begin learning more about these curves through internet searches.

One might note a feature shared by two of these graphs: "sharp corners,'' or cusps. We have seen graphs with cusps before and determined that such functions are not differentiable at these points. This leads us to a definition.

It is clear that each is 0 when \(t=0,\ \pi/2,\ \pi,\ldots\). Thus the astroid is not smooth at these points, corresponding to the cusps seen in the figure. We demonstrate this once more.

Example \(\PageIndex{9}\): Determine where a curve is not smooth

We begin by taking derivatives. One should be careful to note that a "sharp corner'' does not have to occur when a curve is not smooth. For instance, one can verify that \(x=t^3\), \(y=t^6\) produce the familiar \(y=x^2\) parabola. However, in this parametrization, the curve is not smooth. A particle traveling along the parabola according to the given parametric equations comes to rest at \(t=0\), though no sharp point is created.\\

Our previous experience with cusps taught us that a function was not differentiable at a cusp. This can lead us to wonder about derivatives in the context of parametric equations and the application of other calculus concepts. Given a curve defined parametrically, how do we find the slopes of tangent lines? Can we determine concavity? We explore these concepts and more in the next section.