A plane does not have an obvious "direction'' as does a line. It is possible to associate a plane with a direction in a very useful way, however: there are exactly two directions perpendicular to a plane. Any vector with one of these two directions is called normal to the plane. So while there are many normal vectors to a given plane, they are all parallel or anti-parallel to each other. Figure 12.5.1. A plane defined via vectors perpendicular to a normal.

We will frequently need to find an equation for a plane given certain information about the plane. While there may occasionally be slightly shorter ways to get to the desired result, it is always possible, and usually advisable, to use the given information to find a normal to the plane and a point on the plane, and then to find the equation as above.

So we now understand equations of planes; let us turn to lines. Unfortunately, it turns out to be quite inconvenient to represent a typical line with a single equation; we need to approach lines in a different way.

Unlike a plane, a line in three dimensions does have an obvious direction, namely, the direction of any vector parallel to it. In fact a line can be defined and uniquely identified by providing one point on the line and a vector parallel to the line (in one of two possible directions). That is, the line consists of exactly those points we can reach by starting at the point and going for some distance in the direction of the vector. Let's see how we can translate this into more mathematical language.

In other words, as \(t\) runs through all possible real values, the vector \( \langle v_1,v_2,v_3\rangle+t\langle a,b,c\rangle\) points to every point on the line when its tail is placed at the origin. Another common way to write this is as a set of parametric equations:

In two dimensions, two lines either intersect or are parallel; in three dimensions, lines that do not intersect might not be parallel. In this case, since the direction vectors for the lines are not parallel or anti-parallel we know the lines are not parallel. If they intersect, there must be two values \(a\) and \(b\) so that \(\langle 1,1,1\rangle+a\langle 1,2,-1\rangle= \langle 3,2,1\rangle+b\langle -1,-5,3\rangle\), that is,

This gives three equations in two unknowns, so there may or may not be a solution in general. In this case, it is easy to discover that \(a=3\) and \(b=-1\) satisfies all three equations, so the lines do intersect at the point \((4,7,-2)\). 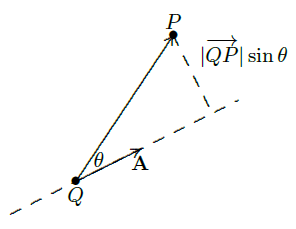