Coordinate systems are tools that let us use algebraic methods to understand geometry. While the rectangular (also called Cartesian) coordinates that we have been discussing are the most common, some problems are easier to analyze in alternate coordinate systems. A coordinate system is a scheme that allows us to identify any point in the plane or in three-dimensional space by a set of numbers. In rectangular coordinates these numbers are interpreted, roughly speaking, as the lengths of the sides of a rectangular "box.''

In two dimensions you may already be familiar with an alternative, called polar coordinates. In this system, each point in the plane is identified by a pair of numbers ¥((r,¥theta)¥). The number ¥(¥theta¥) measures the angle between the positive ¥(x¥)-axis and a vector with tail at the origin and head at the point, as shown in Figure ¥(¥PageIndex{1}¥); the number ¥(r¥) measures the distance from the origin to the point. Either of these may be negative; a negative ¥(¥theta¥) indicates the angle is measured clockwise from the positive ¥(x¥)-axis instead of counter-clockwise, and a negative ¥(r¥) indicates the point at distance ¥(|r|¥) in the opposite of the direction given by ¥(¥theta¥). Figure ¥(¥PageIndex{1}¥) also shows the point with rectangular coordinates ¥( (1,¥sqrt3)¥) and polar coordinates ¥((2,¥pi/3)¥), 2 units from the origin and ¥(¥pi/3¥) radians from the positive ¥(x¥)-axis. Figure ¥(¥PageIndex{2}¥):Cylindrical coordinates: the general case and the point with rectangular coordinates ¥( (1,¥sqrt3, 3)¥). Of course, it's easy to see directly that this defines a cylinder as mentioned above.

Roughly speaking, ¥(¥theta¥) is like longitude and ¥(¥phi¥) is like latitude. (Earth longitude is measured as a positive or negative angle from the prime meridian, and is always between 0 and 180 degrees, east or west; ¥(¥theta¥) can be any positive or negative angle, and we use radians except in informal circumstances. Earth latitude is measured north or south from the equator; ¥(¥phi¥) is measured from the north pole down.) This system is called spherical coordinates; the coordinates are listed in the order ¥((¥rho,¥theta,¥phi)¥), where ¥(¥rho¥) is the distance from the origin, and like ¥(r¥) in cylindrical coordinates it may be negative. The general case and an example are pictured in Figure ¥(¥PageIndex{4}¥); the length marked ¥(r¥) is the ¥(r¥) of cylindrical coordinates. 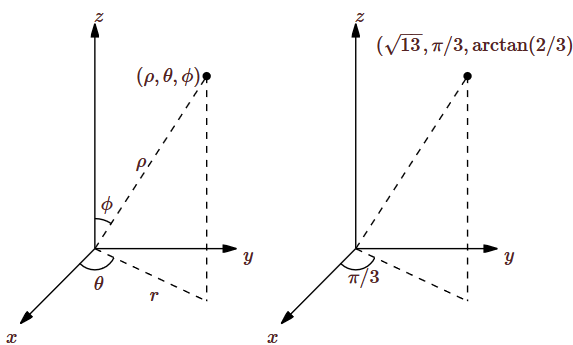 If we start with the Cartesian equation of the sphere and substitute, we get the spherical equation:

Find an equation for the cylinder ¥( x^2+y^2=4¥) in spherical coordinates.

Proceeding as in the previous example: