For such a graph to be readable, the vectors must be fairly short,which is accomplished by using a different scale for the vectors than for the axes. Such graphs are thus useful for understanding the sizes of the vectors relative to each other but not their absolute size. 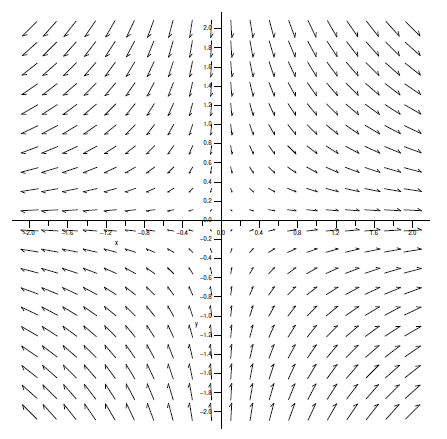 Vector fields have many important applications, as they can be used to represent many physical quantities: the vector at a point may represent the strength of some force (gravity, electricity, magnetism) or a velocity (wind speed or the velocity of some other fluid).

We have already seen a particularly important kind of vector field---the gradient. Given a function \(f(x,y)\), recall that the gradient is \(\langle f_x(x,y),f_y(x,y)\rangle\), a vector that depends on (is a function of) \(x\) and \(y\). We usually picture the gradient vector with its tail at \((x,y)\), pointing in the direction of maximum increase. Vector fields that are gradients have some particularly nice properties, as we will see. An important example is

which points from the point \((x,y,z)\) toward the origin and has length

which turns out to be extremely useful.