provided the integration on the right is done counter-clockwise around \(C\).

We already know one case, not particularly interesting, in which this theorem is true: If \(\bf F\) is conservative, we know that the integral \(\oint_C {\bf F}\cdot d{\bf r}=0\), because any integral of a conservative vector field around a closed curve is zero. We also know in this case that \(\partial P/\partial y=\partial Q/\partial x\), so the double integral in the theorem is simply the integral of the zero function, namely, 0. So in the case that \(\bf F\) is conservative, the theorem says simply that \(0=0\).

We illustrate the theorem by computing both sides of

Starting with the double integral:

There is no single formula to describe the boundary of \(D\), so to compute the left side directly we need to compute three separate integrals corresponding to the three sides of the triangle, and each of these integrals we break into two integrals, the "\(dx\)'' part and the "\(dy\)'' part. The three sides are described by \(y=0\), \(y=1-x\), and \(x=0\). The integrals are then

In this case, none of the integrations are difficult, but the second approach is somewhat tedious because of the necessity to set up three different integrals. In different circumstances, either of the integrals, the single or the double, might be easier to compute. Sometimes it is worthwhile to turn a single integral into the corresponding double integral, sometimes exactly the opposite approach is best.

Here is a clever use of Green's Theorem: We know that areas can be computed using double integrals, namely,

An ellipse centered at the origin, with its two principal axes aligned with the \(x\) and \(y\) axes, is given by

We find the area of the interior of the ellipse via Green's theorem. To do this we need a vector equation for the boundary; one such equation is \(\langle a\cos t,b\sin t\rangle\), as
\(t\) ranges from 0 to \(2\pi\). We can easily verify this by substitution:

The first two integrals are not particularly difficult, but the third is very easy, though the choice of \(P\) and \(Q\) seems more complicated. 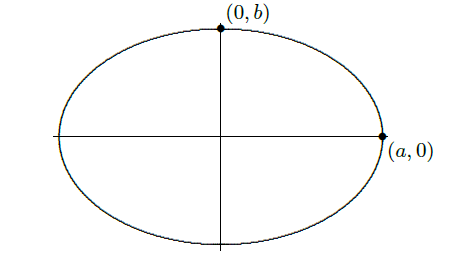 We cannot here prove Green's Theorem in general, but we can do a special case. We seek to prove that

It is sufficient to show that

which we can do if we can compute the double integral in both possible ways, that is, using \(dA=dy\,dx\) and \(dA=dx\,dy\).

For the first equation, we start with

Here we have simply used the ordinary Fundamental Theorem of Calculus, since for the inner integral we are integrating a derivative with respect to \(y\): an antiderivative of \(\partial P/\partial y\) with respect to \(y\) is simply \(P(x,y)\), and then we substitute \(g_1\) and \(g_2\) for \(y\) and subtract.

which is the result of the double integral times \(-1\), as desired.

The equation involving \(Q\) is essentially the same, and left as an exercise.