In vector (or multivariable) calculus, we will deal with functions of two or three variables (usually \(x, y\) or \(x, y, z\), respectively). The graph of a function of two variables, say, \(z = f(x,y)\), lies in Euclidean space, which in the Cartesian coordinate system consists of all ordered triples of real numbers \((a, b, c)\). Since Euclidean space is 3-dimensional, we denote it by \(\mathbb{R}^{3}\). The graph of \(f\) consists of the points \((x, y, z) = (x, y, f(x, y))\). The 3-dimensional coordinate system of Euclidean space can be represented on a flat surface, such as this page or a blackboard, only by giving the illusion of three dimensions, in the manner shown in Figure 1.1.1. Euclidean space has three mutually perpendicular coordinate axes (\(x, y\) and \(z\)), and three mutually perpendicular coordinate planes\index{plane!coordinate}: the \(xy\)-plane, \(yz\)-plane and \(xz\)-plane (Figure 1.1.2). So far, we have discussed the \(\textit{position}\) of an object in 2-dimensional or 3-dimensional space. But what about something such as the velocity of the object, or its acceleration? Or the gravitational force acting on the object? These phenomena all seem to involve motion and \(\textit{direction}\) in some way. This is where the idea of a \(\textit{vector}\) comes in.

You have already dealt with velocity and acceleration in single-variable calculus. For example, for motion along a straight line, if \(y = f(t)\) gives the displacement of an object after time \(t\), then \(dy/dt = f\,'(t)\) is the velocity of the object at time \(t\). The derivative \(f\,'(t)\) is just a number, which is positive if the object is moving in an agreed-upon "positive'' direction, and negative if it moves in the opposite of that direction. So you can think of that number, which was called the velocity of the object, as having two components: a \(\textit{magnitude}\), indicated by a nonnegative number, preceded by a direction, indicated by a plus or minus symbol (representing motion in the positive direction or the negative direction, respectively), i.e. \(f\,'(t) = \pm a\) for some number \(a \ge 0\). Then \(a\) is the magnitude of the velocity (normally called the \(\textit{speed}\) of the object), and the \(\pm\) represents the direction of the velocity (though the \(+\) is usually omitted for the positive direction).

To indicate the direction of a vector, we draw an arrow from its initial point to its terminal point. We will often denote a vector by a single bold-faced letter (e.g. \(\textbf{v}\)) and use the terms ``magnitude" and ``length'' interchangeably. Note that our definition could apply to systems with any number of dimensions (Figure 1.1.4 (a)-(c)).

Now that we know what a vector is, we need a way of determining when two vectors are equal. This leads us to the following definition.

Two nonzero vectors are \(\textbf{equal}\) if they have the same magnitude and the same direction. Any vector with zero magnitude is equal to the zero vector. 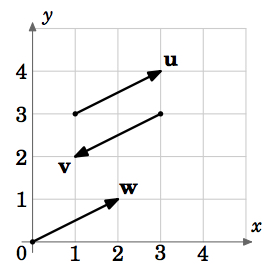 So we can see that there are an infinite number of vectors for a given magnitude and direction, those vectors all being equal and differing only by their initial and terminal points. Is there a single vector which we can choose to represent all those equal vectors? The answer is yes, and is suggested by the vector \(\textbf{w}\) in Figure 1.1.5.

Unless otherwise indicated, when speaking of "the vector" with a given magnitude and direction, we will mean the one whose initial point is at the origin of the coordinate system.

Thinking of vectors as starting from the origin provides a way of dealing with vectors in a standard way, since every coordinate system has an origin. But there will be times when it is convenient to consider a different initial point for a vector (for example, when adding vectors, which we will do in the next section). Another advantage of using the origin as the initial point is that it provides an easy correspondence between a vector and its terminal point. Figure 1.1.6 Correspondence between points and vectors Recall the distance formula for points in the Euclidean plane:

By this formula, we have the following result:

To calculate the magnitude of vectors in \(\mathbb{R}^{3}\), we need a distance formula for points in Euclidean space (we will postpone the proof until the next section):

The proof will use the following result: