In single-variable calculus, differentiation and integration are thought of as inverse operations. For instance, to integrate a function \(f (x)\) it is necessary to find the antiderivative of \(f\) , that is, another function \(F(x)\) whose derivative is \(f (x)\). Is there a similar way of defining integration of real-valued functions of two or more variables? The answer is yes, as we will see shortly. Recall also that the definite integral of a nonnegative function \(f (x) \ge 0\) represented the area “under” the curve \(y = f (x)\). As we will now see, the double integral of a nonnegative real-valued function \(f (x, y) \ge 0\) represents the volume “under” the surface \(z = f (x, y)\). 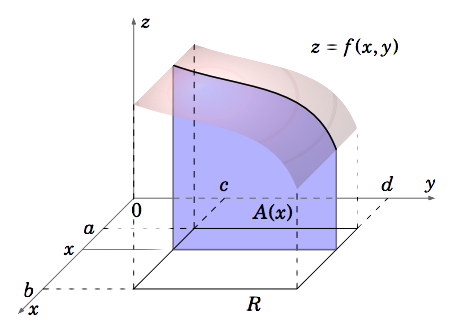 We will always refer to this volume as “the volume under the surface”. The above expression uses what are called iterated integrals. First the function \(f (x, y)\) is integrated as a function of \(y\), treating the variable \(x\) as a constant (this is called integrating with respect to \(y\)). That is what occurs in the “inner” integral between the square brackets in Equation \ref{Eq3.1}. This is the first iterated integral. Once that integration is performed, the result is then an expression involving only \(x\), which can then be integrated with respect to \(x\). That is what occurs in the “outer” integral above (the second iterated integral). The final result is then a number (the volume). This process of going through two iterations of integrals is called double integration, and the last expression in Equation \ref{Eq3.1} is called a double integral.

It turns out that in general the order of the iterated integrals does not matter. Also, we will usually discard the brackets and simply write

Suppose we had switched the order of integration. We can verify that we still get the same answer: