Our study of vector-valued functions combines ideas from our earlier examination of single-variable calculus with our description of vectors in three dimensions from the preceding chapter. In this section, we extend concepts from earlier chapters and also examine new ideas concerning curves in three-dimensional space. These definitions and theorems support the presentation of material in the rest of this chapter and also in the remaining chapters of the text.

Definition of a Vector-Valued Function

A vector-valued function is a function of the form

Substitute the appropriate values of \(t\) into the function.

Recall that a plane vector consists of two quantities: direction and magnitude. Given any point in the plane (the initial point), if we move in a specific direction for a specific distance, we arrive at a second point. This represents the terminal point of the vector. We calculate the components of the vector by subtracting the coordinates of the initial point from the coordinates of the terminal point.

consists of the set of all points \((f(t),\,g(t))\), and the path it traces is called a plane curve. The graph of a vector-valued function of the form

consists of the set of all points \((f(t),\,g(t),\,h(t))\), and the path it traces is called a space curve. Any representation of a plane curve or space curve using a vector-valued function is called a vector parameterization of the curve.

Each plane curve and space curve has an orientation, indicated by arrows drawn in on the curve, that shows the direction of motion along the curve as the value of the parameter \(t\) increases.

Create a graph of each of the following vector-valued functions:

1. As with any graph, we start with a table of values. We then graph each of the vectors in the second column of the table in standard position and connect the terminal points of each vector to form a curve (Figure \(\PageIndex{1}\)). This curve turns out to be an ellipse centered at the origin.

The graph of this curve is also an ellipse centered at the origin.

3. We go through the same procedure for a three-dimensional vector function.

You may notice that the graphs in parts a. and b. are identical. This happens because the function describing curve b is a so-called reparameterization of the function describing curve a. In fact, any curve has an infinite number of reparameterizations; for example, we can replace \(t\) with \(2t\) in any of the three previous curves without changing the shape of the curve. The interval over which \(t\) is defined may change, but that is all. We return to this idea later in this chapter when we study arc-length parameterization. As mentioned, the name of the shape of the curve of the graph in \(\PageIndex{3}\) is a helix. The curve resembles a spring, with a circular cross-section looking down along the \(z\)-axis. It is possible for a helix to be elliptical in cross-section as well. For example, the vector-valued function \(\vecs r(t)=4 \cos t \,\hat{\mathbf{i}}+3 \sin t \,\hat{\mathbf{j}}+t \,\hat{\mathbf{k}}\) describes an elliptical helix. The projection of this helix into the \(xy\)-plane is an ellipse. Last, the arrows in the graph of this helix indicate the orientation of the curve as \(t\) progresses from \(0\) to \(4π\).

Start by making a table of values, then graph the vectors for each value of \(t\). 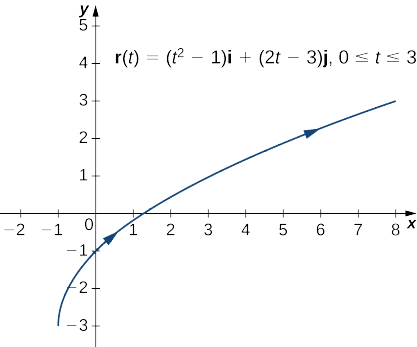 Limits and Continuity of a Vector-Valued Function

Definition: limit of a vector-valued function

In the following example, we show how to calculate the limit of a vector-valued function.

Example \(\PageIndex{3}\): Evaluating the Limit of a Vector-Valued Function

For each of the following vector-valued functions, calculate \(\lim \limits_{t \to 3}\vecs r(t)\) for

Use Equation \ref{Th2} from the preceding theorem.

Now that we know how to calculate the limit of a vector-valued function, we can define continuity at a point for such a function.

helix
a three-dimensional curve in the shape of a spiral