We have already learned that the graph of a quadratic function \(f(x) = ax^2 + bx + c\) with \(a \neq 0\) is called a parabola. To our surprise and delight, we may also define parabolas in terms of distance.

Schematically, we have the following. 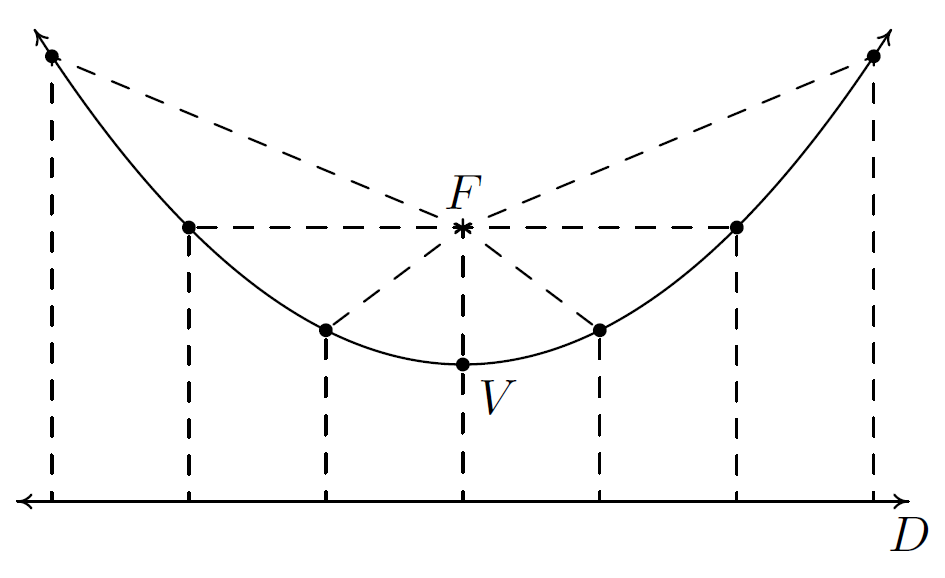 We want to use only the distance definition of parabola to derive the equation of a parabola and, if all is right with the universe, we should get an expression much like those studied in Section 2.3. Let \(p\) denote the directed (we'll talk more about what 'directed' means later). distance from the vertex to the focus, which by definition is the same as the distance from the vertex to the directrix. For simplicity, assume that the vertex is \((0,0)\) and that the parabola opens upwards. Hence, the focus is \((0,p)\) and the directrix is the line \(y = -p\). Our picture becomes 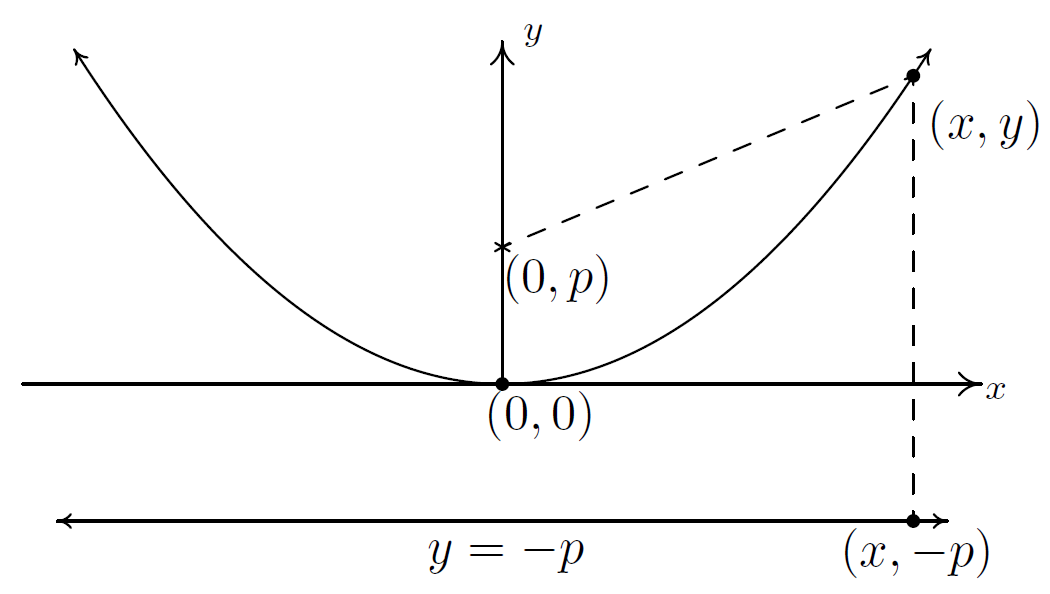 If we choose to place the vertex at an arbitrary point \((h,k)\), we arrive at the following formula using either transformations from Section 1.7 or re-deriving the formula from Definition \(\PageIndex{1}\).

The Standard Equation of a Vertical (i.e., a parabola which opens either upwards or downwards) Parabola 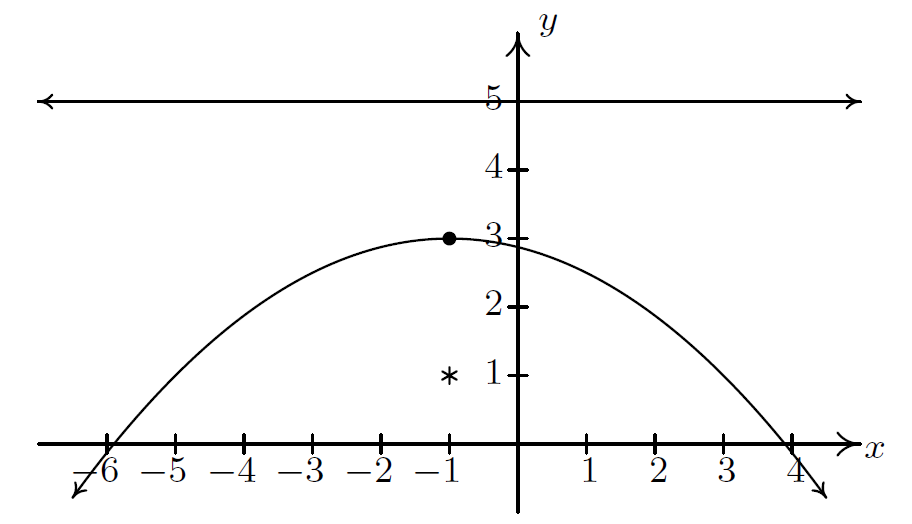 It turns out that the length of the latus rectum, called the \index{parabola ! focal diameter} \index{focal diameter of a parabola} \textbf{focal diameter} of the parabola is \(|4p|\), which, in light of Equation \ref{standardvparabola}, is easy to find. In our last example, for instance, when graphing \((x+1)^2 = -8(y-3)\), we can use the fact that the focal diameter is \(|-8| = 8\), which means the parabola is \(8\) units wide at the focus, to help generate a more accurate graph by plotting points \(4\) units to the left and right of the focus. 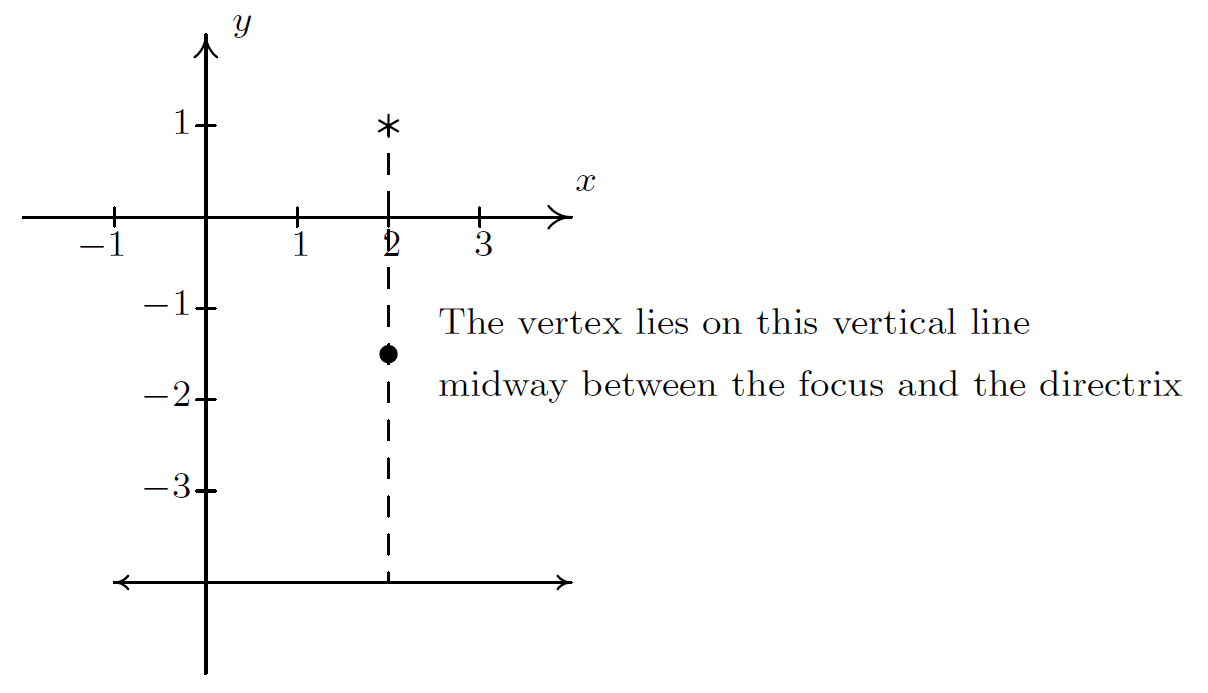 The Standard Equation of a Horizontal Parabola As with circles, not all parabolas will come to us in the forms in Equations \ref{standardvparabola} or \ref{standardhparabola}. If we encounter an equation with two variables in which exactly one variable is squared, we can attempt to put the equation into a standard form using the following steps.

To Write the Equation of a Parabola in Standard Form

Consider the equation \(y^2 + 4y + 8x = 4\). Put this equation into standard form and graph the parabola. Find the vertex, focus, and directrix. In studying quadratic functions, we have seen parabolas used to model physical phenomena such as the trajectories of projectiles. Other applications of the parabola concern its 'reflective property' which necessitates knowing about the focus of a parabola. For example, many satellite dishes are formed in the shape of a paraboloid of revolution as depicted below.

Every cross section through the vertex of the paraboloid is a parabola with the same focus. To see why this is important, imagine the dashed lines below as electromagnetic waves heading towards a parabolic dish. It turns out that the waves reflect off the parabola and concentrate at the focus which then becomes the optimal place for the receiver. If, on the other hand, we imagine the dashed lines as emanating from the focus, we see that the waves are reflected off the parabola in a coherent fashion as in the case in a flashlight. Here, the bulb is placed at the focus and the light rays are reflected off a parabolic mirror to give directional light. A satellite dish is to be constructed in the shape of a paraboloid of revolution. If the receiver placed at the focus is located 2 ft above the vertex of the dish, and the dish is to be 12 feet wide, how deep will the dish be?