In previous sections of this chapter, we were either given a function explicitly to graph or evaluate, or we were given a set of points that were guaranteed to lie on the curve. Then we used algebra to find the equation that fit the points exactly. In this section, we use a modeling technique called regression analysis to find a curve that models data collected from real-world observations. With regression analysis, we don’t expect all the points to lie perfectly on the curve. The idea is to find a model that best fits the data. Then we use the model to make predictions about future events.

Do not be confused by the word model. In mathematics, we often use the terms function, equation, and model interchangeably, even though they each have their own formal definition. The term model is typically used to indicate that the equation or function approximates a real-world situation.

We will concentrate on three types of regression models in this section: exponential, logarithmic, and logistic. Having already worked with each of these functions gives us an advantage. Knowing their formal definitions, the behavior of their graphs, and some of their real-world applications gives us the opportunity to deepen our understanding. As each regression model is presented, key features and definitions of its associated function are included for review. Take a moment to rethink each of these functions, reflect on the work we’ve done so far, and then explore the ways regression is used to model real-world phenomena.

Building an Exponential Model from Data

As we’ve learned, there are a multitude of situations that can be modeled by exponential functions, such as investment growth, radioactive decay, atmospheric pressure changes, and temperatures of a cooling object. What do these phenomena have in common? For one thing, all the models either increase or decrease as time moves forward. But that’s not the whole story. It’s the way data increase or decrease that helps us determine whether it is best modeled by an exponential equation. Knowing the behavior of exponential functions in general allows us to recognize when to use exponential regression, so let’s review exponential growth and decay.

As part of the results, your calculator will display a number known as the correlation coefficient, labeled by the variable \(r\), or \(r^2\). (You may have to change the calculator’s settings for these to be shown.) The values are an indication of the “goodness of fit” of the regression equation to the data. We more commonly use the value of \(r^2\) instead of \(r\), but the closer either value is to \(1\), the better the regression equation approximates the data.

In 2007, a university study was published investigating the crash risk of alcohol impaired driving. Data from \(2,871\) crashes were used to measure the association of a person’s blood alcohol level (BAC) with the risk of being in an accident. Table \(\PageIndex{1}\) shows results from the study. The relative risk is a measure of how many times more likely a person is to crash. So, for example, a person with a BAC of \(0.09\) is \(3.54\) times as likely to crash as a person who has not been drinking alcohol. Use the “ExpReg” command from the STAT then CALC menu to obtain the exponential model,

Converting from scientific notation, we have:

Notice that \(r^2≈0.97\) which indicates the model is a good fit to the data. To see this, graph the model in the same window as the scatterplot to verify it is a good fit as shown in Figure \(\PageIndex{2}\): Q&A: Is it reasonable to assume that an exponential regression model will represent a situation indefinitely?

No. Remember that models are formed by real-world data gathered for regression. It is usually reasonable to make estimates within the interval of original observation (interpolation). However, when a model is used to make predictions, it is important to use reasoning skills to determine whether the model makes sense for inputs far beyond the original observation interval (extrapolation).

Building a Logarithmic Model from Data

Just as with exponential functions, there are many real-world applications for logarithmic functions: intensity of sound, pH levels of solutions, yields of chemical reactions, production of goods, and growth of infants. As with exponential models, data modeled by logarithmic functions are either always increasing or always decreasing as time moves forward. Again, it is the way they increase or decrease that helps us determine whether a logarithmic model is best.

Recall that logarithmic functions increase or decrease rapidly at first, but then steadily slow as time moves on. By reflecting on the characteristics we’ve already learned about this function, we can better analyze real world situations that reflect this type of growth or decay. When performing logarithmic regression analysis, we use the form of the logarithmic function most commonly used on graphing utilities, \(y=a+b\ln(x)\). For this function

Due to advances in medicine and higher standards of living, life expectancy has been increasing in most developed countries since the beginning of the 20th century. Table \(\PageIndex{3}\) shows the average life expectancies, in years, of Americans from 1900–2010. 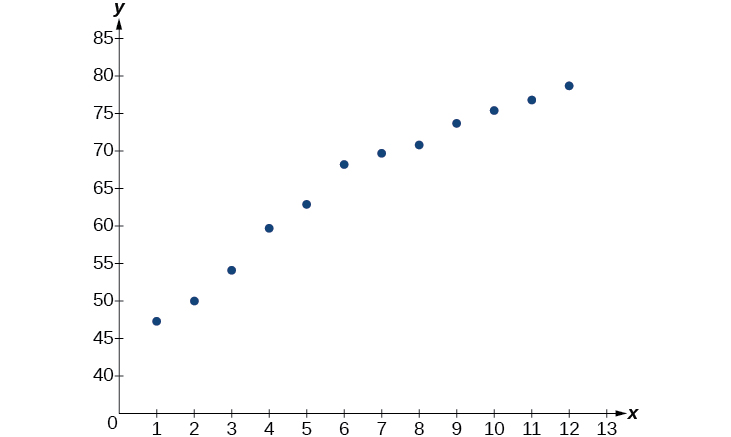 Use the “LnReg” command from the STAT then CALC menu to obtain the logarithmic model,

Next, graph the model in the same window as the scatterplot to verify it is a good fit as shown in Figure \(\PageIndex{4}\): Sales of a video game released in the year 2000 took off at first, but then steadily slowed as time moved on. Table \(\PageIndex{4}\) shows the number of games sold, in thousands, from the years 2000–2010.

Building a Logistic Model from Data

Like exponential and logarithmic growth, logistic growth increases over time. One of the most notable differences with logistic growth models is that, at a certain point, growth steadily slows and the function approaches an upper bound, or limiting value. Because of this, logistic regression is best for modeling phenomena where there are limits in expansion, such as availability of living space or nutrients.

It is worth pointing out that logistic functions actually model resource-limited exponential growth. There are many examples of this type of growth in real-world situations, including population growth and spread of disease, rumors, and even stains in fabric. When performing logistic regression analysis, we use the form most commonly used on graphing utilities:

Mobile telephone service has increased rapidly in America since the mid 1990s. Today, almost all residents have cellular service. Table \(\PageIndex{5}\) shows the percentage of Americans with cellular service between the years 1995 and 2012.

Use the “Logistic” command from the STAT then CALC menu to obtain the logistic model,

Next, graph the model in the same window as shown in Figure \(\PageIndex{6}\) the scatterplot to verify it is a good fit:

According to the model, about 98.8% of Americans had cellular service in 2013.

Access this online resource for additional instruction and practice with exponential function models.

Visit this website for additional practice questions from Learningpod.