We begin with a definition, then explore its meaning.

Definition Concave Up and Concave Down Figure \(\PageIndex{1}\): A function \(f\) with a concave up graph. Notice how the slopes of the tangent lines, when looking from left to right, are increasing.

Now consider a function which is concave down. We essentially repeat the above paragraphs with slight variation. Figure \(\PageIndex{2}\): A function \(f\) with a concave down graph. Notice how the slopes of the tangent lines, when looking from left to right, are decreasing.

Note: A mnemonic for remembering what concave up/down means is: "Concave up is like a cup; concave down is like a frown." It is admittedly terrible, but it works.

Our definition of concave up and concave down is given in terms of when the first derivative is increasing or decreasing. We can apply the results of the previous section and to find intervals on which a graph is concave up or down. That is, we recognize that \(f'\) is increasing when \(f''>0\), etc. Figure \(\PageIndex{3}\): Demonstrating the 4 ways that concavity interacts with increasing/decreasing, along with the relationships with the first and second derivatives.

If knowing where a graph is concave up/down is important, it makes sense that the places where the graph changes from one to the other is also important. This leads us to a definition.

A point of inflection is a point on the graph of \(f\) at which the concavity of \(f\) changes.

Figure \(\PageIndex{4}\) shows a graph of a function with inflection points labeled. 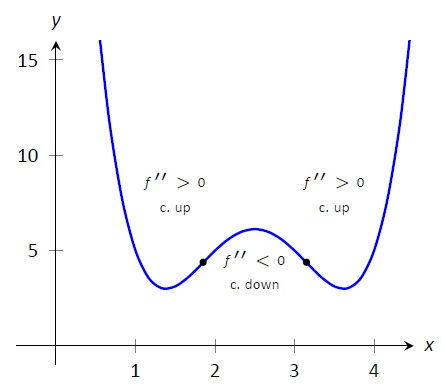 Figure \(\PageIndex{4}\): A graph of a function with its inflection points marked. The intervals where concave up/down are also indicated.

We have identified the concepts of concavity and points of inflection. It is now time to practice using these concepts; given a function, we should be able to find its points of inflection and identify intervals on which it is concave up or down. We do so in the following examples. 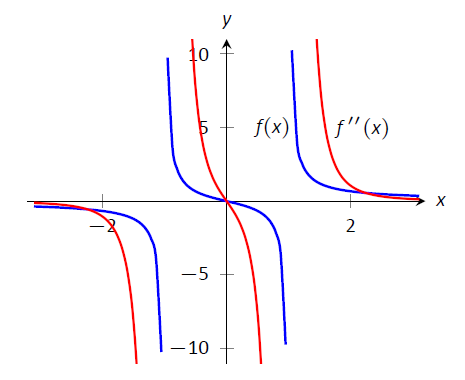 We utilize this concept in the next example.

The sales of a certain product over a three-year span are modeled by \(S(t)= t^4-8t^2+20\), where \(t\) is the time in years, shown in Figure \(\PageIndex{9}\). Over the first two years, sales are decreasing. Find the point at which sales are decreasing at their greatest rate. 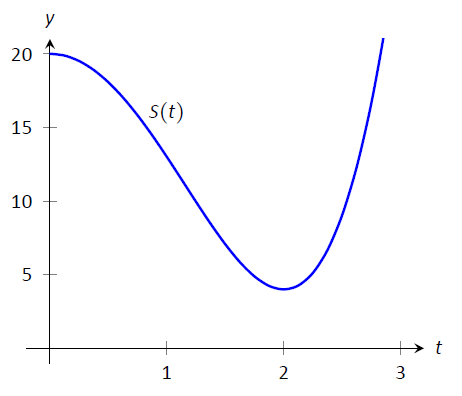 This is both the inflection point and the point of maximum decrease. This is the point at which things first start looking up for the company. After the inflection point, it will still take some time before sales start to increase, but at least sales are not decreasing quite as quickly as they had been. Note: A note about concavity:

In general, concavity can change only where either the second derivative is 0, where there is a vertical asymptote, or (rare in practice) where the second derivative is undefined. But concavity doesn't \emph{have} to change at these places. For instance, if \(f(x)=x^4\), then \(f''(0)=0\), but there is no change of concavity at 0 and also no inflection point there. Moreover, if \(f(x)=1/x^2\), then \(f\) has a vertical asymptote at 0, but there is no change in concavity at 0. 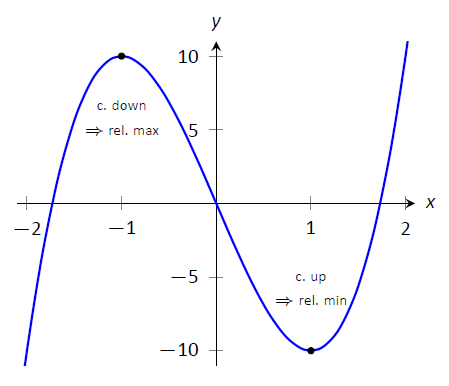 We have been learning how the first and second derivatives of a function relate information about the graph of that function. We have found intervals of increasing and decreasing, intervals where the graph is concave up and down, along with the locations of relative extrema and inflection points. In Chapter 1 we saw how limits explained asymptotic behavior. In the next section we combine all of this information to produce accurate sketches of functions.