We can also apply calculus ideas to \(F(x)\); in particular, we can compute its derivative. While this may seem like an innocuous thing to do, it has far--reaching implications, as demonstrated by the fact that the result is given as an important theorem.

Initially this seems simple, as demonstrated in the following example.

We spent a great deal of time in the previous section studying \(\int_0^4(4x-x^2)\,dx\). Using the Fundamental Theorem of Calculus, evaluate this definite integral.

The Fundamental Theorem of Calculus states

This is the same answer we obtained using limits in the previous section, just with much less work.

Notation: A special notation is often used in the process of evaluating definite integrals using the Fundamental Theorem of Calculus. Instead of explicitly writing \(F(b)-F(a)\), the notation \(F(x)\Big|_a^b\) is used. Thus the solution to Example \(\PageIndex{2}\) would be written as:

The Constant \(C\): Any antiderivative \(F(x)\) can be chosen when using the Fundamental Theorem of Calculus to evaluate a definite integral, meaning any value of \(C\) can be picked. The constant always cancels out of the expression when evaluating \(F(b)-F(a)\), so it does not matter what value is picked. This being the case, we might as well let \(C=0\).

This integral is interesting; the integrand is a constant function, hence we are finding the area of a rectangle with width \((5-1)=4\) and height 2. Notice how the evaluation of the definite integral led to \(2(4)=8\).

Understanding Motion with the Fundamental Theorem of Calculus

The Fundamental Theorem of Calculus states that

Using the Fundamental Theorem of Calculus, we have

As acceleration is the rate of velocity change, integrating an acceleration function gives total change in velocity. We do not have a simple term for this analogous to displacement. If \(a(t) = 5 \text{ miles}/\text{h}^2 \) and \(t\) is measured in hours, then

The Fundamental Theorem of Calculus and the Chain Rule

Part 1 of the Fundamental Theorem of Calculus (FTC) states that given \(\displaystyle F(x) = \int_a^x f(t) \,dt\), \(F'(x) = f(x)\). Using other notation, \( \frac{d}{\,dx}\big(F(x)\big) = f(x)\). While we have just practiced evaluating definite integrals, sometimes finding antiderivatives is impossible and we need to rely on other techniques to approximate the value of a definite integral. Functions written as \(\displaystyle F(x) = \int_a^x f(t) \,dt\) are useful in such situations.

It may be of further use to compose such a function with another. As an example, we may compose \(F(x)\) with \(g(x)\) to get

What is the derivative of such a function? The Chain Rule can be employed to state

An example will help us understand this.

Practice this once more. It will help to sketch these two functions, as done in Figure \(\PageIndex{3}\). Following Theorem \(\PageIndex{3}\), the area is 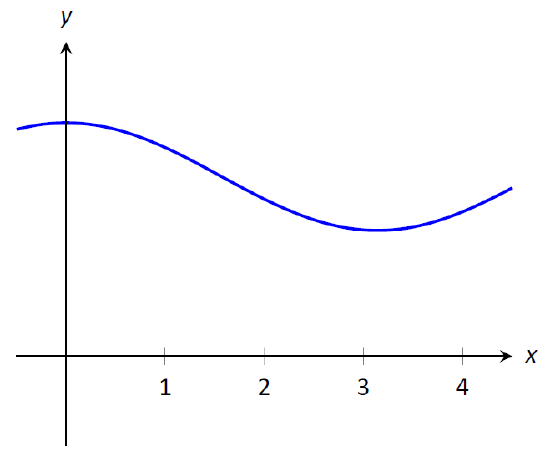 Figure \(\PageIndex{4}\): A graph of a function \(f\) to introduce the Mean Value Theorem. Finally, in (c) the height of the rectangle is such that the area of the rectangle is exactly that of \(\displaystyle \int_0^4 f(x)\,dx\). Since rectangles that are "too big", as in (a), and rectangles that are "too little," as in (b), give areas greater/lesser than \(\displaystyle \int_1^4 f(x)\,dx\), it makes sense that there is a rectangle, whose top intersects \(f(x)\) somewhere on \([1,4]\), whose area is exactly that of the definite integral.

We state this idea formally in a theorem.

This is an existential statement; \(c\) exists, but we do not provide a method of finding it. Theorem \(\PageIndex{4}\) is directly connected to the Mean Value Theorem of Differentiation, given as Theorem 3.2.1; we leave it to the reader to see how.

We demonstrate the principles involved in this version of the Mean Value Theorem in the following example. The value \(f(c)\) is the average value in another sense. First, recognize that the Mean Value Theorem can be rewritten as

This leads us to a definition.

An application of this definition is given in the following example.

Example \(\PageIndex{8}\): Finding the average value of a function

What is the average velocity of the object?

By our definition, the average velocity is:

What was the displacement of the object in Example \(\PageIndex{8}\)? We calculate this by integrating its velocity function: \(\displaystyle \int_0^3 (t-1)^2 \,dt = 3\) ft. Its final position was 3 feet from its initial position after 3 seconds: its average velocity was 1 ft/s.

This section has laid the groundwork for a lot of great mathematics to follow. The most important lesson is this: definite integrals can be evaluated using antiderivatives. Since the previous section established that definite integrals are the limit of Riemann sums, we can later create Riemann sums to approximate values other than "area under the curve," convert the sums to definite integrals, then evaluate these using the Fundamental Theorem of Calculus. This will allow us to compute the work done by a variable force, the volume of certain solids, the arc length of curves, and more.