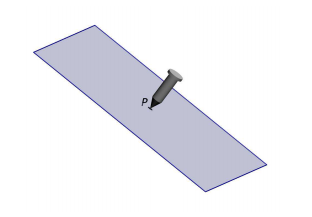 Figure 10.54: Illustrating defining a plane with a sheet of cardboard and a nail.

The right hand side is just a number, so we replace it with \(d\):

Definition 63 Equations of a Plane in Standard and General Forms

The plane passing through the point \(P=(x_0,y_0,z_0)\) with normal vector \(\vec n=\langle a,b,c\rangle\) can be described by an equation with standard form

the equation's general form is

Example \(\PageIndex{1}\): Finding the equation of a plane. We have just demonstrated the fact that any three non-collinear points define a plane. (This is why a three-legged stool does not "rock;'' it's three feet always lie in a plane. A four-legged stool will rock unless all four feet lie in the same plane.)\\

Example \(\PageIndex{2}\): Finding the equation of a plane.

Verify that lines \(\ell_1\) and \(\ell_2\), whose parametric equations are given below, intersect, then give the equation of the plane that contains these two lines in general form.

We can pick any point in the plane with which to write our equation; each line gives us infinite choices of points. We choose \(P\), the point of intersection. We follow Definition 63 to write the plane's equation in general form: Example \(\PageIndex{3}\): Finding the equation of a plane

The line and plane are sketched in Figure 10.57. Give the parametric equations of the line that is the intersection of the planes \(p_1\) and \(p_2\), where:

Solution
To find an equation of a line, we need a point on the line and the direction of the line.

We can find a point on the line by solving each equation of the planes for \(z\):

The planes and line are graphed in Figure 10:58. Figure 10.58: Graphing the planes and their line of intersection in Example 10.6.4

Example \(\PageIndex{5}\): Finding the intersection of a plane and a line Just as it was useful to find distances between points and lines in the previous section, it is also often necessary to find the distance from a point to a plane. Figure 10.60: Illustrating finding the distance from a point to a plane.

KEY IDEA 51 Distance from a Point to a Plane

Example \(\PageIndex{6}\): Distance between a point and a plane

We can use Key Idea 51 to find other distances. Given two parallel planes, we can find the distance between these planes by letting \(P\) be a point on one plane and \(Q\) a point on the other. If \(\ell\) is a line parallel to a plane, we can use the Key Idea to find the distance between them as well: again, let \(P\) be a point in the plane and let \(Q\) be any point on the line. (One can also use Key Idea 50.) The Exercise section contains problems of these types.

These past two sections have not explored lines and planes in space as an exercise of mathematical curiosity. However, there are many, many applications of these fundamental concepts. Complex shapes can be modeled (or, approximated) using planes. For instance, part of the exterior of an aircraft may have a complex, yet smooth, shape, and engineers will want to know how air flows across this piece as well as how heat might build up due to air friction. Many equations that help determine air flow and heat dissipation are difficult to apply to arbitrary surfaces, but simple to apply to planes. By approximating a surface with millions of small planes one can more readily model the needed behavior.