Up to this point in this text we have considered mathematics in a 2--dimensional world. We have plotted graphs on the \(x\)-\(y\) plane using rectangular and polar coordinates and found the area of regions in the plane. We have considered properties of solid objects, such as volume and surface area, but only by first defining a curve in the plane and then rotating it out of the plane.

While there is wonderful mathematics to explore in "2D,'' we live in a "3D'' world and eventually we will want to apply mathematics involving this third dimension. In this section we introduce Cartesian coordinates in space and explore basic surfaces. This will lay a foundation for much of what we do in the remainder of the text.

Visualizing points in space on paper can be problematic, as we are trying to represent a 3-dimensional concept on a 2--dimensional medium. We cannot draw three lines representing the three axes in which each line is perpendicular to the other two. Despite this issue, standard conventions exist for plotting shapes in space that we will discuss that are more than adequate.

One convention is that the axes must conform to the right hand rule. This rule states that when the index finger of the right hand is extended in the direction of the positive \(x\)-axis, and the middle finger (bent "inward'' so it is perpendicular to the palm) points along the positive \(y\)-axis, then the extended thumb will point in the direction of the positive \(z\)-axis. (It may take some thought to verify this, but this system is inherently different from the one created by using the "left hand rule.''). There are two popular methods to draw axes that we briefly discuss.

In Figure \(\PageIndex{1}\) we see the point \(P=(2,1,3)\) plotted on a set of axes. The basic convention here is that the \(x\)-\(y\) plane is drawn in its standard way, with the \(z\)-axis down to the left. The perspective is that the paper represents the \(x\)-\(y\) plane and the positive \(z\) axis is coming up, off the page. This method is preferred by many engineers. Because it can be hard to tell where a single point lies in relation to all the axes, dashed lines have been added to let one see how far along each axis the point lies. 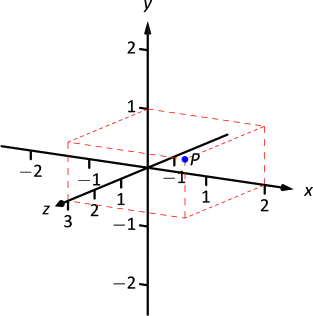 One can also consider the \(x\)-\(y\) plane as being a horizontal plane in, say, a room, where the positive \(z\)-axis is pointing up. When one steps back and looks at this room, one might draw the axes as shown in Figure \(\PageIndex{2}\). The same point \(P\) is drawn, again with dashed lines. This point of view is preferred by most mathematicians, and is the convention adopted by this text. As long as the coordinate axes are positioned so that they follow the right hand rule, it does not matter how the axes are drawn on paper.

It is of critical importance to know how to measure distances between points in space. The formula for doing so is based on measuring distance in the plane, and is known (in both contexts) as the Euclidean measure of distance.

The points \(P\) and \(Q\) are plotted in Figure \(\PageIndex{3}\); no special consideration need be made to draw the line segment connecting these two points; simply connect them with a straight line. One cannot actually measure this line on the page and deduce anything meaningful; its true length must be measured analytically. Applying Definition 48, we have

Squaring both sides, we get the standard equation of a sphere in space with center at \(C=(a,b,c)\) with radius \(r\), as given in the following Key Idea.

KEY IDEA 45: STANDARD EQUATION OF A SPHERE IN SPACE

Example \(\PageIndex{2}\): Equation of a sphere

To determine the center and radius, we must put the equation in standard form. This requires us to complete the square (three times).

The equation of a sphere is an example of an implicit function defining a surface in space. In the case of a sphere, the variables \(x\), \(y\) and \(z\) are all used. We now consider situations where surfaces are defined where one or two of these variables are absent.

Introduction to Planes in Space Sketch the region defined by the inequalities \(-1\leq y\leq 2\). In this text, we consider curves \(C\) that lie in planes parallel to one of the coordinate planes, and lines \(L\) that are perpendicular to these planes, forming right cylinders. Thus the directrix can be defined using equations involving 2 variables, and the rulings will be parallel to the axis of the 3\(^\text{rd}\) variable.

In the example preceding the definition, the curve \(x^2+y^2=1\) in the \(x\)-\(y\) plane is the directrix and the rulings are lines parallel to the \(z\)-axis. (Any circle shown in Figure 10.8 can be considered a directrix; we simply choose the one where \(z=0\).) Sample rulings can also be viewed in part (b) of the figure. More examples will help us understand this definition.

One of the applications of integration we learned previously was to find the volume of solids of revolution -- solids formed by revolving a curve about a horizontal or vertical axis. We now consider how to find the equation of the surface of such a solid. We generalize the above principles to give the equations of surfaces formed by revolving curves about the coordinate axes.

Example \(\PageIndex{5}\): Finding equation of a surface of revolution

Note how the surface (and hence the resulting equation) is the same if we began with the curve \(x=\sin z\), which is also drawn in Figure \(\PageIndex{11a}\).

Find the equation of the surface found by revolving \(z=\sin x\) about the \(z\)-axis.

Spheres, planes and cylinders are important surfaces to understand. We now consider one last type of surface, a quadric surface. The definition may look intimidating, but we will show how to analyze these surfaces in an illuminating way.

A quadric surface is the graph of the general second--degree equation in three variables:

We study each shape by considering traces, that is, intersections of each surface with a plane parallel to a coordinate plane. For instance, consider the elliptic paraboloid \(z= x^2/4+y^2\), shown in Figure 10.13. If we intersect this shape with the plane \(z=d\) (i.e., replace \(z\) with \(d\)), we have the equation:

This describes an ellipse -- so cross sections parallel to the \(x\)-\(y\) coordinate plane are ellipses. This ellipse is drawn in Figure \(\PageIndex{13}\). Now consider cross sections parallel to the \(x\)-\(z\) plane. For instance, letting \(y=0\) gives the equation \(z=x^2/4\), clearly a parabola. Intersecting with the plane \(x=0\) gives a cross section defined by \(z=y^2\), another parabola. These parabolas are also sketched in the figure.

Thus we see where the elliptic paraboloid gets its name: some cross sections are ellipses, and others are parabolas.

Such an analysis can be made with each of the quadric surfaces. We give a sample equation of each, provide a sketch with representative traces, and describe these traces.

Multiplying the right hand side by \((-1)\) defines an elliptic paraboloid that "opens'' in the opposite direction.

The one variable with a negative coefficient corresponds to the axis that the hyperboloid "opens'' along.

The one variable with a positive coefficient corresponds to the axis that the hyperboloid "opens'' along. In the case illustrated, when \(|d|<|c|\), there is no trace. The parabolic traces will open along the axis of the one variable that is raised to the first power.

Sketch the quadric surface defined by the given equation.

Consider the quadric surface shown in Figure Figure \(\PageIndex{17}\). Which of the following equations best fits this surface? We can immediately eliminate option (a), as the constant in that equation is not 1.

The hyperboloid "opens'' along the \(x\)-axis, meaning \(x\) must be the only variable with a positive coefficient, eliminating (c).

This section has introduced points in space and shown how equations can describe surfaces. The next sections explore vectors, an important mathematical object that we'll use to explore curves in space.