In the \((x,y)\) coordinate system we normally write the \(x\)-axis horizontally, with positive numbers to the right of the origin, and the \(y\)-axis vertically, with positive numbers above the origin. That is, unless stated otherwise, we take "rightward'' to be the positive \(x\)-direction and "upward'' to be the positive \(y\)-direction. In a purely mathematical situation, we normally choose the same scale for the \(x\)- and \(y\)-axes. For example, the line joining the origin to the point \((a,a)\) makes an angle of 45\({}^\circ\) with the \(x\)-axis (and also with the \(y\)-axis).

In applications, often letters other than \(x\) and \(y\) are used, and often different scales are chosen in the horizontal and vertical directions. For example, suppose you drop something from a window, and you want to study how its height above the ground changes from second to second. It is natural to let the letter \(t\) denote the time (the number of seconds since the object was released) and to let the letter \(h\) denote the height. For each \(t\) (say, at one-second intervals) you have a corresponding height \(h\). This information can be tabulated, and then plotted on the \((t,h)\) coordinate plane, as shown in figure 1.0.1. 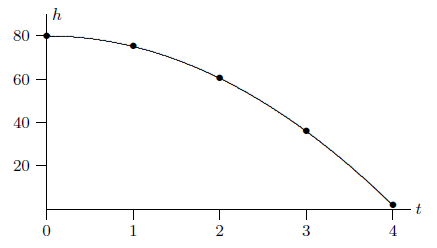 We use the word "quadrant'' for each of the four regions into which the plane is divided by the axes: the first quadrant is where points have both coordinates positive, or the "northeast'' portion of the plot, and the second, third, and fourth quadrants are counted off counterclockwise, so the second quadrant is the northwest, the third is the southwest, and the fourth is the southeast.