As usual, the question is: how might we approximate the surface area? For a surface obtained by rotating a curve around an axis, we can take a polygonal approximation to the curve, as in the last section, and rotate it around the same axis. This gives a surface composed of many "truncated cones;'' a truncated cone is called a frustum of a cone. Figure 9.10.1 illustrates this approximation. Figure 9.10.1. Approximating a surface (left) by portions of cones (right). You can download the Sage worksheetfor this plot and upload it to your own sage account. 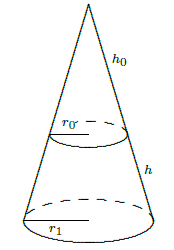 Now we are ready to approximate the area of a surface of revolution. On one subinterval, the situation is as shown in Figure 9.10.4. When the line joining two points on the curve is rotated around the \(x\)-axis, it forms a frustum of a cone. The area is