A vector function \({\bf r}(t)=\langle f(t),g(t),h(t)\rangle\) is a function of one variable---that is, there is only one "input'' value. What makes vector functions more complicated than the functions \(y=f(x)\) that we studied in the first part of this book is of course that the "output'' values are now three-dimensional vectors instead of simply numbers. It is natural to wonder if there is a corresponding notion of derivative for vector functions. In the simpler case of a function \(y=s(t)\), in which \(t\) represents time and \(s(t)\) is position on a line, we have seen that the derivative \(s'(t)\) represents velocity; we might hope that in a similar way the derivative of a vector function would tell us something about the velocity of an object moving in three dimensions.

One way to approach the question of the derivative for vector functions is to write down an expression that is analogous to the derivative we already understand, and see if we can make sense of it. This gives us

if we say that what we mean by the limit of a vector is the vector of the individual coordinate limits. So starting with a familiar expression for what appears to be a derivative, we find that we can make good computational sense out of it---but what does it actually mean? Unfortunately, the vector \(\Delta{\bf r}\) approaches 0 in length; the vector \(\langle 0,0,0\rangle\) is not very informative. By dividing by \(\Delta t\), when it is small, we effectively keep magnifying the length of \(\Delta{\bf r}\) so that in the limit it doesn't disappear. Thus the limiting vector \(\langle f'(t),g'(t),h'(t)\rangle\) will (usually) be a good, non-zero vector that is tangent to the curve.

What about the length of this vector? It's nice that we've kept it away from zero, but what does it measure, if anything? Consider the length of one of the vectors that approaches the tangent vector:

$$\left|{{\bf r}(t+\Delta t)-{\bf r}(t)\over \Delta t}\right|={|{\bf r}(t+\Delta t)-{\bf r}(t)|\over|\Delta t|}$$
The numerator is the length of the vector that points from one position of the object to a "nearby'' position; this length is approximately the distance traveled by the object between times \(t\) and \(t+\Delta t\). Dividing this distance by the length of time it takes to travel that distance gives the average speed. As \(\Delta t\) approaches zero, this average speed approaches the actual, instantaneous speed of the object at time \(t\). 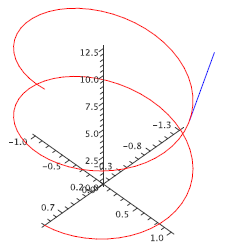 The velocity vector for \(\langle \cos t,\sin t,\cos t\rangle\) is \(\langle -\sin t,\cos t,-\sin t\rangle\). As before, the first two coordinates mean that from above this curve looks like a circle. The \(z\) coordinate is now also periodic, so that as the object moves around the curve its height oscillates up and down. In fact it turns out that the curve is a tilted ellipse, as shown in figure 13.2.3. The derivatives of vector functions obey some familiar looking rules, which we will occasionally need.

Note that because the cross product is not commutative you must remember to do the three cross products in formula (e) in the correct order.

When the derivative of a function \(f(t)\) is zero, we know that the function has a horizontal tangent line, and may have a local maximum or minimum point. If \({\bf r}'(t)={\bf 0}\), the geometric interpretation is quite different, though the interpretation in terms of motion is similar. Certainly we know that the object has speed zero at such a point, and it may thus be abruptly changing direction. In three dimensions there are many ways to change direction; geometrically this often means the curve has a cusp or a point, as in the path of a ball that bounces off the floor or a wall. 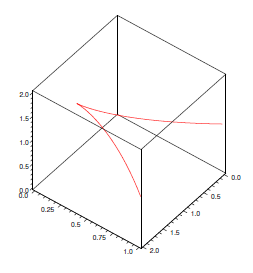 Figure 13.2.6. Path of the object with its initial velocity vector.