As with functions on the real numbers, we will most often encounter sequences that can be expressed by a formula. We have already seen the sequence \( a_i=f(i)=1-1/2^i\), and others are easy to come by:

Faced with a sequence we are interested in the limit \(\lim_{i\to \infty} f(i) = \lim_{i\to\infty} a_i.\) We already understand \(\lim_{x\to\infty} f(x)\) when \(x\) is a real valued variable; now we simply want to restrict the "input'' values to be integers. No real difference is required in the definition of limit, except that we specify, perhaps implicitly, that the variable is an integer. Compare this definition to definition 4.10.2.

This is the sequence

It is occasionally useful to think of the graph of a sequence. Since the function is defined only for integer values, the graph is just a sequence of dots. In figure 11.1.1 we see the graphs of two sequences and the graphs of the corresponding real functions. 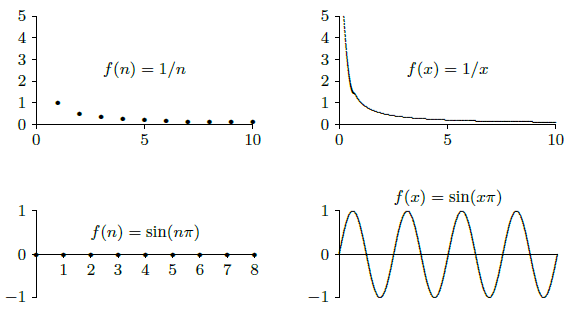 Figure 11.1.1. Graphs of sequences and their corresponding real functions.

Not surprisingly, the properties of limits of real functions translate into properties of sequences quite easily. Theorem 2.3.6 about limits becomes

And a final useful fact:

if and only if

Since this makes sense for real numbers we consider

Thus the sequence converges to 1.

This does not make sense for all real exponents, but the sequence is easy to understand: it is \(1,-1,1,-1,1\ldots\) and clearly diverges.

We consider the sequence

Sometimes we will not be able to determine the limit of a sequence, but we still would like to know whether it converges. In some cases we can determine this even without being able to compute the limit.

If a sequence is bounded and monotonic, then it converges.

We will not prove this; the proof appears in many calculus books. It is not hard to believe: suppose that a sequence is increasing and bounded, so each term is larger than the one before, yet never larger than some fixed value \(N\). The terms must then get closer and closer to some value between \( a_0\) and \(N\). It need not be \(N\), since \(N\) may be a "too-generous'' upper bound; the limit will be the smallest number that is above all of the terms \( a_i\).

(Again it is possible to compute the limit; see exercise 2.)