In the classical compass-and-ruler constructions initial configuration can be completely described by a finite number of points; each line is defined by two points on it and each circle is described by its center and a point on it (equivalently, you may describe a circle by three points on it).

The same way the result of construction can be described by a finite collection of points.

On the other hand, it is easy to make compass-and-ruler constructions that produce segments of the lengths \(a+b\) and \(a-b\) from two given segments of lengths \(a>b\). 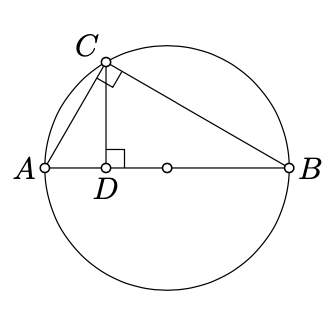 Using this diagram, one should guess a solution to the following exercise.

The discussion above gives a sketch of the proof of the following theorem:

The numbers that can be expressed from the given numbers using the arithmetic operations and the square root “\(\sqrt{\phantom{a}}\)” are called constructible; if the list of given numbers is not given, then we can only use the integers.

The theorem above translates any compass-and-ruler construction problem into a purely algebraic language. For example:

Some of these statements might look evident, but rigorous proofs require some knowledge of abstract algebra (namely, field theory) which is out of the scope of this book.

In the next section, we discuss similar but simpler examples of impossible constructions with an unusual tool. (a) Look at the diagram of regular pentagon; show that the angles marked the same way have the same angle measue. Conclude the that \(XC =BC\) and \(\triangle ABC \sim \triangle AXB\). Therefore