Let us look at some applications of linear second order constant coefficient equations.

Our first example is a mass on a spring. Suppose we have a mass \(m > 0 \) (in kilograms) connected by a spring with spring constant \( k > 0 \) (in newtons per meter) to a fixed wall. There may be some external force \( F(t) \) (in newtons) acting on the mass. Finally, there is some friction measured by \( c \geq 0 \) (in newton-seconds per meter) as the mass slides along the floor (or perhaps there is a damper connected).

Let \(x\) be the displacement of the mass ( \( x = 0 \) is the rest position), with \(x\) growing to the right (away from the wall). The force exerted by the spring is proportional to the compression of the spring by Hooke’s law. Therefore, it is \(kx\) in the negative direction. Similarly the amount of force exerted by friction is proportional to the velocity of the mass. By Newton’s second law we know that force equals mass times acceleration and hence \( mx'' = F(t) - cx' - kx \) or

This is a linear second order constant coefficient ODE. We set up some terminology about this equation. We say the motion is

This system appears in lots of applications even if it does not at first seem like it. Many real-world scenarios can be simplified to a mass on a spring. For example, a bungee jump setup is essentially a mass and spring system (you are the mass). It would be good if someone did the math before you jump off the bridge, right? Let us give two other examples.

Here is an example for electrical engineers. Consider the pictured \(RLC\) circuit. There is a resistor with a resistance of \(R\) ohms, an inductor with an inductance of \(L\) henries, and a capacitor with a capacitance of \(C\) farads. There is also an electric source (such as a battery) giving a voltage of \(E(t)\) volts at time \(t\) (measured in seconds). Let \(Q(t)\) be the charge in coulombs on the capacitor and \(I(t)\) be the current in the circuit. The relation between the two is \(Q' = I\). By elementary principles we find \(L I' + RI + \frac{Q}{C} = E\). We differentiate to get

This is a nonhomogeneous second order constant coefficient linear equation. As \(L, R\), and \(C\) are all positive, this system behaves just like the mass and spring system. Position of the mass is replaced by current. Mass is replaced by inductance, damping is replaced by resistance, and the spring constant is replaced by one over the capacitance. The change in voltage becomes the forcing function—for constant voltage this is an unforced motion. 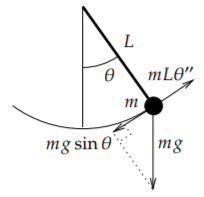 Let us derive this equation using Newton's second law: force equals mass times acceleration. The acceleration is \(L \theta''\) and mass is \(m\). So \(mL\theta''\) has to be equal to the tangential component of the force given by the gravity, which is \(m g \sin \theta\) in the opposite direction. So \(mL\theta'' = -mg \sin \theta\). The \(m\) curiously cancels from the equation. The errors from this approximation build up. So after a long time, the state of the real-world system might be substantially different from our solution. Also we will see that in a mass-spring system, the amplitude is independent of the period. This is not true for a pendulum. Nevertheless, for reasonably short periods of time and small swings (that is, only small angles \(\theta\)), the approximation is reasonably good.

In real-world problems it is often necessary to make these types of simplifications. We must understand both the mathematics and the physics of the situation to see if the simplification is valid in the context of the questions we are trying to answer.

In this section we will only consider free or unforced motion, as we cannot yet solve nonhomogeneous equations. Let us start with undamped motion where \( c = 0 \). We have the equation

The general solution to this equation is

By a trigonometric identity, we have that for two different constants \(C\) and \( \gamma\), we have

While it is generally easier to use the first form with \( A\) and \(B\) to solve for the initial conditions, the second form is much more natural. The constants \(C\) and \( \gamma\) have very nice interpretation. We look at the form of the solution

Let us pause to explain the word angular before the word frequency. The units of \(w_0\) are radians per unit time, not cycles per unit time as is the usual measure of frequency. Because we know one cycle is \(2 \pi\) radians, the usual frequency is given by \( \dfrac {w_0}{ 2 \pi} \). It is simply a matter of where we put the constant \( 2 \pi\), and that is a matter of taste.

The period of the motion is one over the frequency (in cycles per unit time) and hence \( \dfrac {2 \pi}{w_0} \). That is the amount of time it takes to complete one full oscillation.

Suppose that \( m = 2kg \) and \(k = 8 \dfrac {N}{m}\). The whole mass and spring setup is sitting on a truck that was traveling at \( 1 \dfrac {m}{s} \). The truck crashes and hence stops. The mass was held in place \(0.5\) meters forward from the rest position. During the crash the mass gets loose. That is, the mass is now moving forward at \( 1 \dfrac {m}{s} \), while the other end of the spring is held in place. The mass therefore starts oscillating. What is the frequency of the resulting oscillation and what is the amplitude. The units are the mks units (meters-kilograms-seconds).

So the equation with initial conditions is

The general solution is In general, for free undamped motion, a solution of the form

Many calculators and computer software do not only have the atan function for arctangent, but also what is sometimes called atan2. This function takes two arguments, \(B\) and \(A\), and returns a \( \gamma\) in the correct quadrant for you.

Let us now focus on damped motion. Let us rewrite the equation

The characteristic equation is

Using the quadratic formula we get that the roots are

The form of the solution depends on whether we get complex or real roots. We get real roots if and only if the following number is nonnegative: This equation has at most one solution \(t \ge 0\). For some initial conditions the graph will never cross the \(x\) axis, as is evident from the sample graphs.

It is not hard to see that this satisfies the initial conditions. Finally note that the angular pseudo-frequency\(^{1}\) (we do not call it a frequency since the solution is not really a periodic function) \(w_1\) becomes smaller when the damping \(c\) (and hence \(P\)) becomes larger. This makes sense. When we change the damping just a little bit, we do not expect the behavior of the solution to change dramatically. If we keep making \(c\) larger, then at some point the solution should start looking like the solution for critical damping or overdamping, where no oscillation happens. So if \(c^2\) approaches \(4km\), we want \(w_1\) to approach 0.

[1] We do not call \(\omega_{1}\) a frequency since the solution is not really a periodic function.