In all of our studies with derivatives to date, we have worked in a setting where we can express a formula for the function of interest explicitly in terms of \(x\). But there are many interesting curves that are determined by an equation involving \(x\) and \(y\) for which it is impossible to solve for \(y\) in terms of \(x\). Perhaps the simplest and most natural of all such curves are circles. Because of the circle’s symmetry, for each \(x\) value strictly between the endpoints of the horizontal diameter, there are two corresponding \(y\)-values.

For instance, in Figure \(\PageIndex{1}\), we have labeled \(A = (-3, \sqrt{7})\) and \(B = (-3, -\sqrt{7})\), and these points demonstrate that the circle fails the vertical line test. Hence, it is impossible to represent the circle through a single function of the form \(y = f (x)\). At the same time, portions of the circle can be represented explicitly as a function of \(x\), such as the highlighted arc that is magnified in the center of Figure \(\PageIndex{1}\). Moreover, it is evident that the circle is locally linear, so we ought to be able to find a tangent line to the curve at every point; thus, it makes sense to wonder if we can compute dy dx at any point on the circle, even though we cannot write \(y\) explicitly as a function of \(x\). Finally, we note that the righthand curve in Figure \(\PageIndex{1}\) is called a lemniscate and is just one of many fascinating possibilities for implicitly given curves.

In working with implicit functions, we will often be interested in finding an equation for dy dx that tells us the slope of the tangent line to the curve at a point \((x, y)\). To do so, it will be necessary for us to work with \(y\) while thinking of \(y\) as a function of \(x\), but without being able to write an explicit formula for \(y\) in terms of \(x\). The following preview activity reminds us of some ways we can compute derivatives of functions in settings where the function’s formula is not known. For instance, recall the earlier example

Let \(f\) be a differentiable function of \(x\) (whose formula is not known) and recall that \(\frac{d}{dx} [ f (x)]\) and \(f' (x)\) are interchangeable notations. Determine each of the following derivatives of combinations of explicit functions of \(x\), the unknown function \(f\), and an arbitrary constant \(c\).

Because a circle is perhaps the simplest of all curves that cannot be represented explicitly as a single function of \(x\), we begin our exploration of implicit differentiation with the example of the circle given by

It is visually apparent that this curve is locally linear, so it makes sense for us to want to find the slope of the tangent line to the curve at any point, and moreover to think that the curve is differentiable. The big question is: how do we find a formula for \(\frac{dy}{dx}\), the slope of the tangent line to the circle at a given point on the circle? By viewing \(y\) as an implicit function of \(x\), we essentially think of \(y\) as some function whose formula \(f (x)\) is unknown, but which we can differentiate. Just as \(y\) represents an unknown formula, so too its derivative with respect to \(x\), \(\frac{dy}{dx}\), will be (at least temporarily) unknown.

On the right side of Equation \ref{eq11}, the derivative of the constant 16 is 0, and on the left we can apply the sum rule, so it follows that

Next, it is essential that we recognize the different roles being played by \(x\) and \(y\). Since \(x\) is the independent variable, it is the variable with respect to which we are differentiating, and thus

In both situations, we have an unknown function being squared, and we seek the derivative of the result. This requires the chain rule, by which we find that

Therefore, continuing our work in differentiating both sides of Equation \ref{eq9}, we now have that

There are several important things to observe about the result that We consider the following more complicated example to investigate and demonstrate some additional algebraic issues that arise in problems involving implicit differentiation.

For the curve given implicitly by We begin by differentiating the curve’s equation implicitly. Taking the derivative of each side of Equation \ref{ex1} with respect to \(x\),

by the sum rule and the fact that the derivative of a constant is zero, we have

Factoring the left side to isolate \(\frac{dy}{dx}\), we have

This value matches our visual estimate of the slope of the tangent line shown in Figure \(\PageIndex{3}\).

means the product of the derivative of \(y\) with respect to \(x\) with the quantity \(x^2 + y^2\). Understanding this notational subtlety is essential. The following activities present opportunities to explore several different problems involving implicit differentiation. 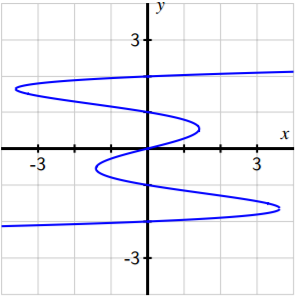 Thus, we observe that the tangent line will be horizontal precisely when the numerator is zero and the denominator is nonzero, making the slope of the tangent line zero. Similarly, the tangent line will be vertical whenever \(q(x, y) = 0\) and \(p(x, y) \neq 0\), making the slope undefined. If both \(x\) and \(y\) are involved in an equation such as \(p(x, y) = 0\), we try to solve for one of them in terms of the other, and then use the resulting condition in the original equation that defines the curve to find an equation in a single variable that we can solve to determine the point(s) that lie on the curve at which the condition holds. It is not always possible to execute the desired algebra due to the possibly complicated combinations of functions that often arise.

Consider the curve defined by the equation

whose graph is pictured in Figure \(\PageIndex{5}\). Through implicit differentiation, it can be shown that

Use this fact to answer each of the following questions. 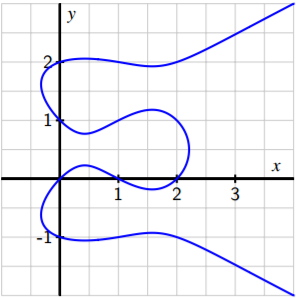 The closing activity in this section offers more opportunities to practice implicit differentiation.

For each of the following curves, use implicit differentiation to find dy/dx and determine the equation of the tangent line at the given point.