Sodium chloride, also known as table salt, is an ionic compound with the chemical formula \(\ce{NaCl}\), representing a 1:1 ratio of sodium and chloride ions. It is commonly used as a condiment and food preservative. Salt can be created by adding two very reactive elements together: sodium (\(\ce{Na (s)}\) metal and chlorine (\(\ce{Cl2 (g)}\) gas. 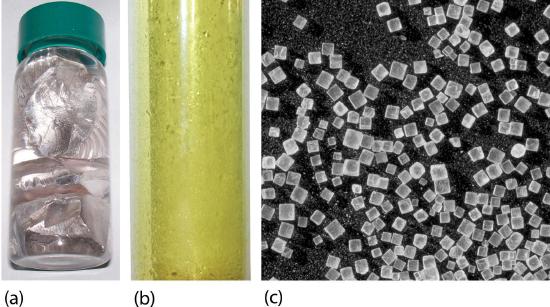 Figure \(\PageIndex{1}\): Sodium + Chlorine = Sodium Chloride (a) Sodium is a very reactive metal. (b) Chlorine is a pale yellow, noxious gas. (c) Together, sodium and chlorine make sodium chloride—salt—which is necessary for our survival. Source: Photo on the left courtesy of reenhorn1 and photo in the center courtesy of Benjah-bmm27. Photo on the right © Thinkstock.

Salt is necessary for life. \(\ce{Na^{+}}\) ions are one of the main ions in the human body and are necessary to regulate the fluid balance in the body. \(\ce{Cl^{−}}\) ions are necessary for proper nerve function and respiration. Both of these ions are supplied by salt. The taste of salt is one of the fundamental tastes; salt is probably the most ancient flavoring known, and one of the few rocks we eat. Clearly when the elemental sodium and chlorine combine (Equation \ref{eq1}), the resulting salt product has radically different properties (both physical and chemical). This reaction is spectacular to observe (Video \(\PageIndex{1}\)).

Another compound is sugar, which is the generic name for sweet, soluble carbohydrates, many of which are used in food. Sugar has the chemical formulate \(\ce{C12H22O11}\) and is constructed from different elements than salt: carbon, hydrogen and oxygen. While sugar qualitatively resembles table salt (often confused in the kitchen), the two have distinctly different physical and chemical properties. There are various types of sugar derived from different sources. While sugar is made with carbon, hydrogen, and oxygen, it is considerably harder to synthesize from its constituent elements than table salt is (Equation \ref{eq1}). However, the thermal decomposition is considerably easier and can be represented as a dehydration of sucrose to pure carbon and water vapor in Equation \ref{eq2}, and demonstrated in Video \(\PageIndex{2}\).

Video \(\PageIndex{2}\): A science experiment in the kitchen shows what happens to sugar molecules when they are heated. The experiment did not disappoint!