There are no new technical issues in using graphs to visualize 2-mode data. Both actors and events are treated as nodes, and lines are used to show the connections of actors to events (there will be no lines from actors to actors directly, or from events to events).

In UCINET, the tool NetDraw>File>Open>UCINET dataset>2-Mode Network produces a useful graph for small networks. Figure 17.5 shows one rendering of the California donors data in its valued form. 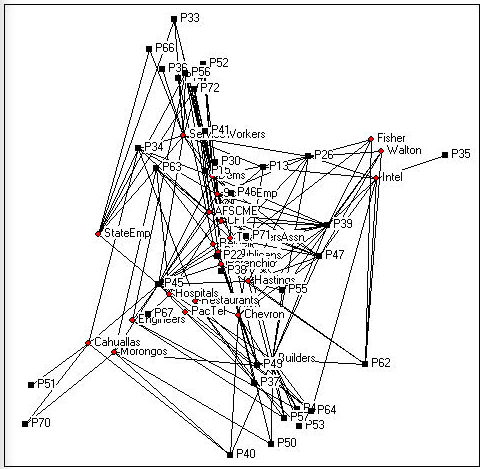 Since the graphic has 68 nodes (actors plus initiatives) it is a bit cluttered. We've deleted isolates (initiatives that don't have donors in common and donor that don't have initiatives in common), located the points in space using Gower MDS, resized the nodes and node labels, and eliminated the arrow heads.

We can get some insights from this kind of visualization of a two-mode network (particularly when some kind of scaling method is used to locate the points in space). Actors that are close together (e.g. the Cahualla and Morongo Indians in the lower left corner) are connected because they have similar profiles of events. In this particular case, the two tribes were jointly involved in initiatives about gambling (P70) and environment (P40). Similarly, certain ballot propositions are "similar" in that they have donors in common. And, particular donors are located in the same parts of the space as certain initiatives - defining which issues (events) tend to go along with which actors.