In Chapter 3, we learned how the first and second derivatives of a function influence its graph. In this chapter we explore other applications of the derivative.

Solving equations is one of the most important things we do in mathematics, yet we are surprisingly limited in what we can solve analytically. For instance, equations as simple as \(x^5+x+1=0\) or \(\cos x =x\) cannot be solved by algebraic methods in terms of familiar functions. Fortunately, there are methods that can give us approximate solutions to equations like these. These methods can usually give an approximation correct to as many decimal places as we like. In Section 1.5, we learned about the Bisection Method. This section focuses on another technique (which generally works faster), called Newton's Method. 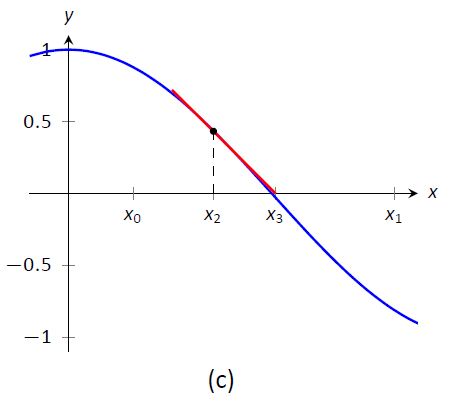 We summarize this process as follows.

Let \(f\) be a differentiable function on an interval \(I\) with a root in \(I\). To approximate the value of the root, accurate to \(d\) decimal places:

Note: Newton's Method is not infallible. The sequence of approximate values may not converge, or it may converge so slowly that one is "tricked" into thinking a certain approximation is better than it actually is. These issues will be discussed at the end of the section.}

We performed 5 iterations of Newton's Method to find a root accurate to the first 3 places after the decimal; our final approximation is \(1.465.\) The exact value of the root, to six decimal places, is \(1.465571\); It turns out that our \(x_5\) is accurate to more than just 3 decimal places.

A graph of \(f(x)\) is given in Figure \(\PageIndex{2}\). We can see from the graph that our initial approximation of \(x_0=1\) was not particularly accurate; a closer guess would have been \(x_0=1.5\). Our choice was based on ease of initial calculation, and shows that Newton's Method can be robust enough that we do not have to make a very accurate initial approximation. We can automate this process on a calculator that has an Ans key that returns the result of the previous calculation. Start by pressing \(\texttt{1}\) and then \(\texttt{Enter}\). (We have just entered our initial guess, \(x_0=1\).) Now compute

by entering the following and repeatedly press the \(\texttt{Enter}\) key:

Each time we press the \texttt{Enter} key, we are finding the successive approximations, \(x_1\), \(x_2\), \dots, and each one is getting closer to the root. In fact, once we get past around \(x_7\) or so, the approximations don't appear to be changing. They actually are changing, but the change is far enough to the right of the decimal point that it doesn't show up on the calculator's display. When this happens, we can be pretty confident that we have found an accurate approximation.

Using a calculator in this manner makes the calculations simple; many iterations can be computed very quickly.

Use Newton's Method to approximate a solution to \(\cos{x} = x\), accurate to 5 places after the decimal. 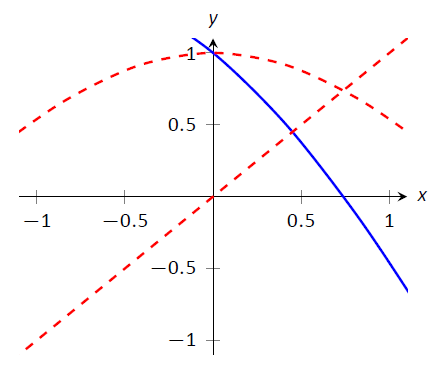 We can continue this way, but it is really best to automate this process. On a calculator with an Ans key, we would start by pressing 0.75, then \(\texttt{Enter}\), inputting our initial approximation. We then enter:

Our approximations \(x_2\) and \(x_3\) did not differ for at least the first 5 places after the decimal, so we could have stopped. However, using our calculator in the manner described is easy, so finding \(x_4\) was not hard. It is interesting to see how we found an approximation, accurate to as many decimal places as our calculator displays, in just 4 iterations.

If you know how to program, you can translate the following pseudocode into your favorite language to perform the computation in this problem. We can also see analytically that it fails. Since

This problem can also occur if, for instance, it turns out that \(f'(x_5)=0\). Adjusting the initial approximation \(x_0\) by a very small amount will likely fix the problem. There is no "fix" to this problem; Newton's Method simply will not work and another method must be used.

While Newton's Method does not always work, it does work "most of the time," and it is generally very fast. Once the approximations get close to the root, Newton's Method can as much as double the number of correct decimal places with each successive approximation. A course in Numerical Analysis will introduce the reader to more iterative root finding methods, as well as give greater detail about the strengths and weaknesses of Newton's Method.