So far we have been investigating functions of the form \(y=f(x)\), with one independent and one dependent variable. Such functions can be represented in two dimensions, using two numerical axes that allow us to identify every point in the plane with two numbers. We now want to talk about three-dimensional space; to identify every point in three dimensions we require three numerical values. The obvious way to make this association is to add one new axis, perpendicular to the \(x\) and \(y\) axes we already understand. We could, for example, add a third axis, the \(z\) axis, with the positive \(z\) axis coming straight out of the page, and the negative \(z\) axis going out the back of the page. This is difficult to work with on a printed page, so more often we draw a view of the three axes from an angle: You must then imagine that the \(z\) axis is perpendicular to the other two. Just as we have investigated functions of the form \(y=f(x)\) in two dimensions, we will investigate three dimensions largely by considering functions; now the functions will (typically) have the form \(z=f(x,y)\). Because we are used to having the result of a function graphed in the vertical direction, it is somewhat easier to maintain that convention in three dimensions. To accomplish this, we normally rotate the axes so that \(z\) points up; the result is then: 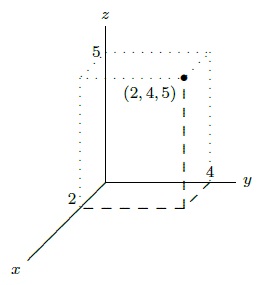 It is now fairly simple to understand some "shapes'' in three dimensions that correspond to simple conditions on the coordinates. In two dimensions the equation \(x=1\) describes the vertical line through \((1,0)\). In three dimensions, it still describes all points with \(x\)-coordinate 1, but this is now a plane, as in Figure 12.1.1.