India is the second most populous country in the world with a population of about \(1.25\) billion people in 2013. The population is growing at a rate of about \(0.2\%\) each year. If this rate continues, the population of India will exceed China’s population by the year 2031. When populations grow rapidly, we often say that the growth is “exponential,” meaning that something is growing very rapidly. To a mathematician, however, the term exponential growth has a very specific meaning. In this section, we will take a look at exponential functions, which model this kind of rapid growth.

What exactly does it mean to grow exponentially? What does the word double have in common with percent increase? People toss these words around errantly. Are these words used correctly? The words certainly appear frequently in the media.

From Table \(\PageIndex{1}\) we can infer that for these two functions, exponential growth dwarfs linear growth.

Apparently, the difference between “the same percentage” and “the same amount” is quite significant. For exponential growth, over equal increments, the constant multiplicative rate of change resulted in doubling the output, or increasing the output by \(100\%\), whenever the input increased by one. For linear growth, the constant additive rate of change over equal increments resulted in adding \(2\) to the output whenever the input was increased by one. Let’s examine the behavior of the graph of the exponential function \(f(x)=2^x\) and highlight some of its key characteristics.

Recall that the base of an exponential function must be a positive real number other than \(1\). Why do we limit the base \(b\) to positive values? To ensure that the outputs will be real numbers. Observe what happens if the base is not positive:

Why do we limit the base to positive values other than \(1\)? Because base \(1\) results in the constant function. Observe what happens if the base is \(1\):

To evaluate an exponential function with the form \(f(x)=b^x\),we simply substitute \(x\) with the given value, and calculate the resulting power. For example:

To evaluate an exponential function with a form other than the basic form, it is important to follow the order of operations. For example:

Note that if the order of operations were not followed, the result would be incorrect:

Follow the order of operations. Be sure to pay attention to the parentheses.

A few years of growth for these companies are illustrated in Table \(\PageIndex{3}\). Figure \(\PageIndex{2}\): The graph shows the numbers of stores Companies A and B opened over a five-year period.

Notice that the domain for both functions is \([0,\infty)\),and the range for both functions is \([100,\infty)\). After year 1, Company B always has more stores than Company A. Although the domain is theoretically \([0, \infty)\), in reality neither company will be able to keep opening stores indefinitely. What do you think could be a reasonable domain for Company B's growth? Back up your claim mathematically, give it to your professor, and make her give you extra credit!

Example \(\PageIndex{4}\): Writing an Exponential Model When the Initial Value Is Known

Unless otherwise stated, do not round any intermediate calculations. Then round the final answer to four places for the remainder of this section.

The exponential model for the population of deer is \(N(t)=80{(1.1447)}^t\). (Note that this exponential function models short-term growth. As the inputs gets large, the output will get increasingly larger, so much so that the model may not be useful in the long term.) A wolf population is growing exponentially. In 2011, \(129\) wolves were counted. By 2013, the population had reached \(236\) wolves. What two points can be used to derive an exponential equation modeling this situation? Write the equation representing the population \(N\) of wolves over time \(t\).

Example \(\PageIndex{5}\): Writing an Exponential Model When the Initial Value is Not Known

Because we don’t have the initial value, we substitute both points into an equation of the form \(f(x)=ab^x\), and then solve the system for \(a\) and \(b\). Yes, provided the two points are either both above the x-axis or both below the x-axis and have different x-coordinates. But keep in mind that we also need to know that the graph is, in fact, an exponential function. Not every graph that looks exponential really is exponential. We need to know the graph is based on a model that shows the same percent growth with each unit increase in \(x\), which in many real world cases represents time.

Given the graph of an exponential function, write its equation

Example \(\PageIndex{6}\): Writing an Exponential Function Given Its Graph

Find an equation for the exponential function graphed in Figure \(\PageIndex{5}\). 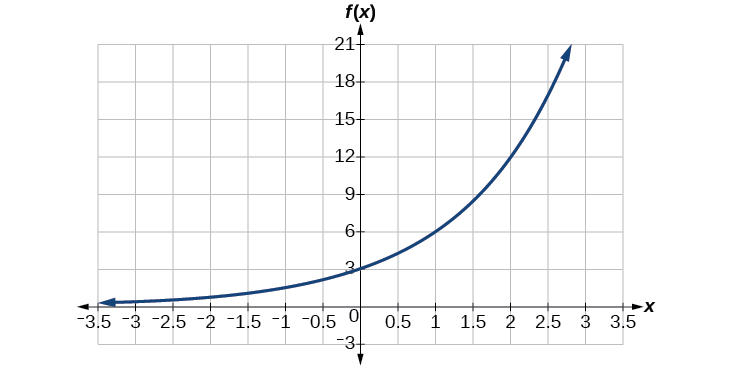 Find an equation for the exponential function graphed in Figure \(\PageIndex{6}\). 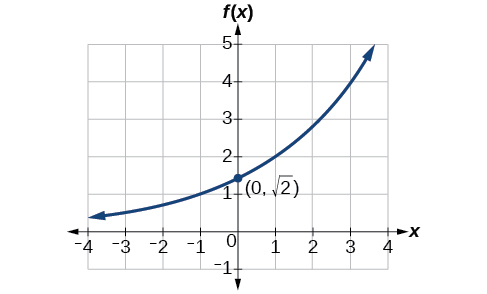 Given two points on the curve of an exponential function, use a graphing calculator to find the equation

Savings instruments in which earnings are continually reinvested, such as mutual funds and retirement accounts, use compound interest. The term compounding refers to interest earned not only on the original value, but on the accumulated value of the account.

The annual percentage rate (APR) of an account, also called the nominal rate, is the yearly interest rate earned by an investment account. The term nominal is used when the compounding occurs a number of times other than once per year. In fact, when interest is compounded more than once a year, the effective interest rate ends up being greater than the nominal rate! This is a powerful tool for investing.

For example, observe Table \(\PageIndex{4}\), which shows the result of investing \($1,000\) at \(10\%\) for one year. Notice how the value of the account increases as the compounding frequency increases.

Example \(\PageIndex{9}\): Using the Compound Interest Formula to Solve for the Principal

A 529 Plan is a college-savings plan that allows relatives to invest money to pay for a child’s future college tuition; the account grows tax-free. Lily wants to set up a 529 account for her new granddaughter and wants the account to grow to \($40,000\) over \(18\) years. She believes the account will earn \(6\%\) compounded semi-annually (twice a year). To the nearest dollar, how much will Lily need to invest in the account now?

Refer to Example \(\PageIndex{9}\). To the nearest dollar, how much would Lily need to invest if the account is compounded quarterly?

Evaluating Functions with Base \(e\)

These values appear to be approaching a limit as \(n\) increases without bound. In fact, as \(n\) gets larger and larger, the expression \({\left (1+\dfrac{1}{n} \right )}^n\) approaches a number used so frequently in mathematics that it has its own name: the letter \(e\). This value is an irrational number, which means that its decimal expansion goes on forever without repeating. Its approximation to six decimal places is shown below.

as \(n\) increases without bound

The letter \(e\) is used as a base for many real-world exponential models. To work with base \(e\), we use the approximation, \(e≈2.718282\). The constant was named by the Swiss mathematician Leonhard Euler (1707–1783) who first investigated and discovered many of its properties.

For all real numbers \(t\),and all positive numbers \(a\) and \(r\),continuous growth or decay is represented by the formula

A person invested \($1,000\) in an account earning a nominal \(10\%\) per year compounded continuously. How much was in the account at the end of one year?

\(3.77E-26\) (This is calculator notation for the number written as \(3.77×10^{−26}\) in scientific notation. While the output of an exponential function is never zero, this number is so close to zero that for all practical purposes we can accept zero as the answer.)

Access these online resources for additional instruction and practice with exponential functions.