Now that we have looked at this process on the number line, we can introduce a more general procedure. To round a number to a specific place, look at the number to the right of that place. If the number is less than \(5\), round down. If it is greater than or equal to \(5\), round up.

How to: Round a Whole Number to a Specific Place Value

Step 1. Locate the given place value. All digits to the left of that place value do not change.

Step 2. Underline the digit to the right of the given place value.

Step 4. Replace all digits to the right of the given place value with zeros.

Example \(\PageIndex{8}\): round a whole number

Example \(\PageIndex{9}\): round a whole number

Round each number to the nearest hundred:

Round each number to the nearest thousand: 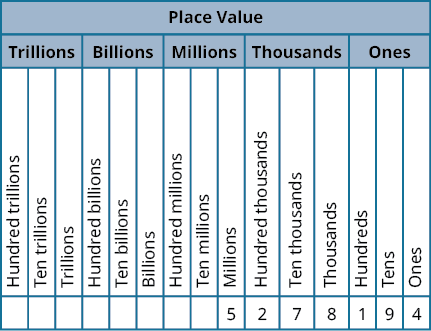 A number paired with a point on a number line is called the coordinate of the point.

The origin is the point labeled 0 on a number line.

Our number system is called a place value system because the value of a digit depends on its position, or place, in a number.

The process of approximating a number is called rounding.

In the following exercises, use place value notation to find the value of the number modeled by the base-10 blocks. In the following exercises, find the place value of the given digits.

In the following exercises, name each number in words.

In the following exercises, write each number as a whole number using digits.

In the following exercises, round to the indicated place value.