We start with an easy problem. An object travels in a straight line at a constant velocity of 5 ft/s for 10 seconds. How far away from its starting point is the object?

It is interesting to note that this solution of 50 feet can be represented graphically. Consider Figure \(\PageIndex{1}\), where the constant velocity of 5ft/s is graphed on the axes. Shading the area under the line from \(t=0\) to \(t=10\) gives a rectangle with an area of 50 square units; when one considers the units of the axes, we can say this area represents 50 ft. Figure \(\PageIndex{1}\): The area under a constant velocity function corresponds to distance traveled.

Now consider a slightly harder situation (and not particularly realistic): an object travels in a straight line with a constant velocity of 5ft/s for 10 seconds, then instantly reverses course at a rate of 2ft/s for 4 seconds. (Since the object is traveling in the opposite direction when reversing course, we say the velocity is a constant \(-2\)ft/s.) How far away from the starting point is the object -- what is its displacement?

Hence the object is 42 feet from its starting location.

We can again depict this situation graphically. In Figure \(\PageIndex{3}\) we have the velocities graphed as straight lines on \([0,10]\) and \([10,14]\), respectively. The displacement of the object is To find the maximum height of the object, we need to find the maximum of \(s\). Recalling our work finding extreme values, we find the critical points of \(s\) by setting its derivative equal to 0 and solving for \(t\):

(Notice how we ended up just finding when the velocity was 0ft/s!) The first derivative test shows this is a maximum, so the maximum height of the object is found at

While we have answered all three questions, let's look at them again graphically, using the concepts of area that we explored earlier. Recall how in our previous work that the displacement of the object (in this case, its height) was found as the area under the velocity curve, as shaded in the figure. Moreover, the area between the curve and the \(t\)--axis that is below the \(t\)--axis counted as "negative" area. That is, it represents the object coming back toward its starting position. So to find the maximum distance from the starting point -- the maximum height -- we find the area under the velocity line that is above the \(t\)--axis, i.e., from \(t=0\) to \(t=1.5\). This region is a triangle; its area is

which matches our previous calculation of the maximum height.

Finally, we find the total signed area under the velocity function from \(t=0\) to \(t=2\) to find the \(s(2)\), the height at \(t=2\), which is a displacement, the distance from the current position to the starting position. That is,

The regions are triangles, and we find

This also matches our previous calculation of the height at \(t=2\).

Notice how we answered each question in this example in two ways. Our first method was to manipulate equations using our understanding of antiderivatives and derivatives. Our second method was geometric: we answered questions looking at a graph and finding the areas of certain regions of this graph.

Given a graph of a function \(y=f(x)\), we will find that there is great use in computing the area between the curve \(y=f(x)\) and the \(x\)-axis. Because of this, we need to define some terms.

We practice using this notation. 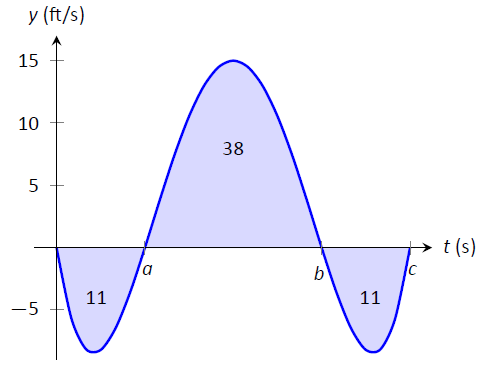 Since the graph gives velocity, finding the maximum speed is simple: it looks to be 15ft/s.

In our examples, we have either found the areas of regions that have nice geometric shapes (such as rectangles, triangles and circles) or the areas were given to us. Consider Figure \(\PageIndex{9}\), where a region below \(y=x^2\) is shaded. What is its area? The function \(y=x^2\) is relatively simple, yet the shape it defines has an area that is not simple to find geometrically. In the next section, we will explore how to find the areas of such regions.