This observation is consistent with the specific values we found above: e.g., \(f'(3)=4-2(3)=-2\). And indeed, our work with a confirms that while the particular value of a at which we evaluate the derivative affects the value of the derivative, that value has almost no bearing on the process of computing the derivative. We note further that the letter being used is immaterial: whether we call it \(a\), \(x\), or anything else, the derivative at a given value is simply given by “4 minus 2 times the value.” We choose to use \(x\) for consistency with the original function given by \(y=f(x)\), as well as for the purpose of graphing the derivative function, and thus we have found that for the function \(f(x)=4x-x^2\), it follows that \(f'(x)=4-2x\).
Because the value of the derivative function is so closely linked to the graphical behavior of the original function, it makes sense to look at both of these functions plotted on the same domain. In Figure 1.18, on the left we show a plot of \(f(x)=4x-x^2\) together with a selection of tangent lines at the points we’ve considered above. On the right, we show a plot of \(f'(x)=4-2x\) with emphasis on the heights of the derivative graph at the same selection of points. Notice the connection between colors in the left and right graph: the green tangent line on the original graph is tied to the green point on the right graph in the following way: the slope of the tangent line at a point on the lefthand graph is the 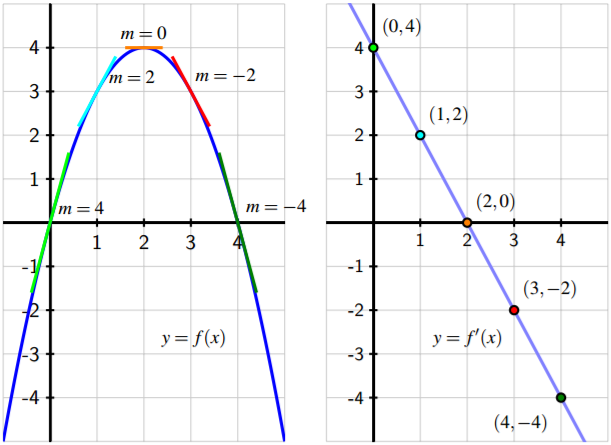 same as the height at the corresponding point on the righthand graph. That is, at each respective value of \(x\), the slope of the tangent line to the original function at that x-value is the same as the height of the derivative function at that x-value. Do note, however, that the units on the vertical axes are different: in the left graph, the vertical units are simply the output units of \(f\). On the righthand graph of \(y=f'(x)\), the units on the vertical axis are units of \(f\) per unit of \(x\). 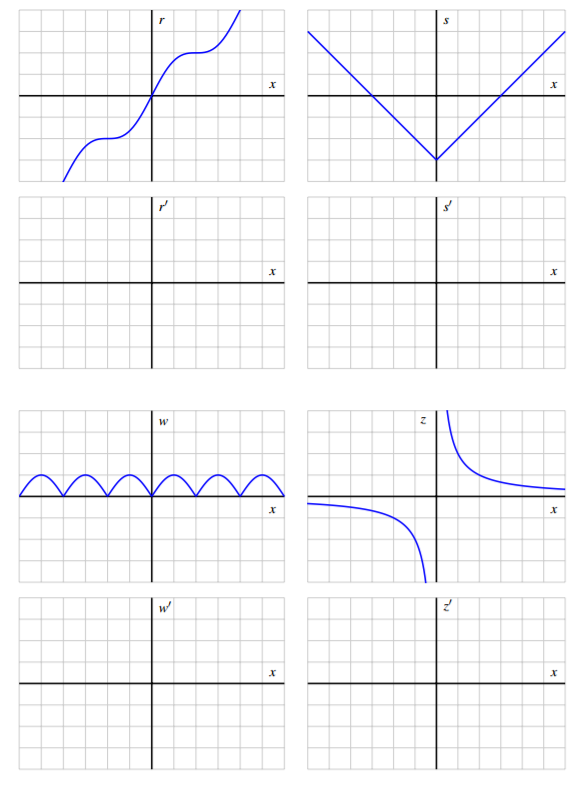