In Section 1.1 we used a function, \(s(t)\), to model the location of a moving object at a given time. Functions are at the heart of mathematics: a function is a process or rule that associates each individual input to exactly one corresponding output. Students learn in courses prior to calculus that there are many different ways to represent functions, including through formulas, graphs, tables, and even words. For example, the squaring function can be thought of in any of these ways. In words, the squaring function takes any real number \(x\) and computes its square. The formulaic and graphical representations go hand in hand, as \(y=f(x)=x^2\) is one of the simplest curves to graph. Finally, we can also partially represent this function through a table of values, essentially by listing some of the ordered pairs that lie on the curve, such as \((-2, 4), (-1, 1), (0, 0), (1, 1)\), and \((2, 4)\).

Functions are especially important in calculus because they often model important phenomena – the location of a moving object at a given time, the rate at which an automobile is consuming gasoline at a certain velocity, the reaction of a patient to the size of a dose of a drug – and calculus can be used to study how these output quantities change in response to changes in the input variable. Moreover, thinking about concepts like average and instantaneous velocity leads us naturally from an initial function to a related, sometimes more complicated function. As one example of this, think about the falling ball whose position function is given by \(s(t)=64-16t^2\) and the average velocity of the ball on the interval \([1, x]\). Observe that 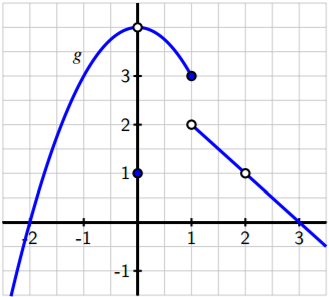 For the function \(g\) pictured in Figure 1.2.1, we make the following observations:

When working from a graph, it suffices to ask if the function approaches a single value from each side of the fixed input. The function value at the fixed input is irrelevant. This reasoning explains the values of the three limits stated above.

For any function \(f\), there are typically three ways to answer the question “does \(f\) have a limit at \(x=a\), and if so, what is the limit?” The first is to reason graphically as we have just done with the example from Preview Activity 1.2. If we have a formula for \(f(x)\), there are two additional possibilities:

An important lesson to take from Example 1.2.4. is that tables can be misleading when determining the value of a limit. While a table of values is useful for investigating the possible value of a limit, we should also use other tools to confirm the value, if we think the table suggests the limit exists.

Suppose that we have a moving object whose position at time \(t\) is given by a function \(s\). We know that the average velocity of the object on the time interval \([a, b]\) is \(AV_{[a,b]}=\frac{s(b)-s(a)}{b-a}\). We define the instantaneous velocity at \(a\) to be the limit of average velocity as \(b\) approaches \(a\). Note particularly that as \(b\to a\), the length of the time interval gets shorter and shorter (while always including \(a\)). In Section 1.3, we will introduce a helpful shorthand notation to represent the instantaneous rate of change. For now, we will write \(IV_{t=a}\) for the instantaneous velocity at \(t=a\), and thus

Equivalently, if we think of the changing value \(b\) as being of the form \(b=a+h\), where \(h\) is some small number, then we may instead write

Again, the most important idea here is that to compute instantaneous velocity, we take a limit of average velocities as the time interval shrinks.